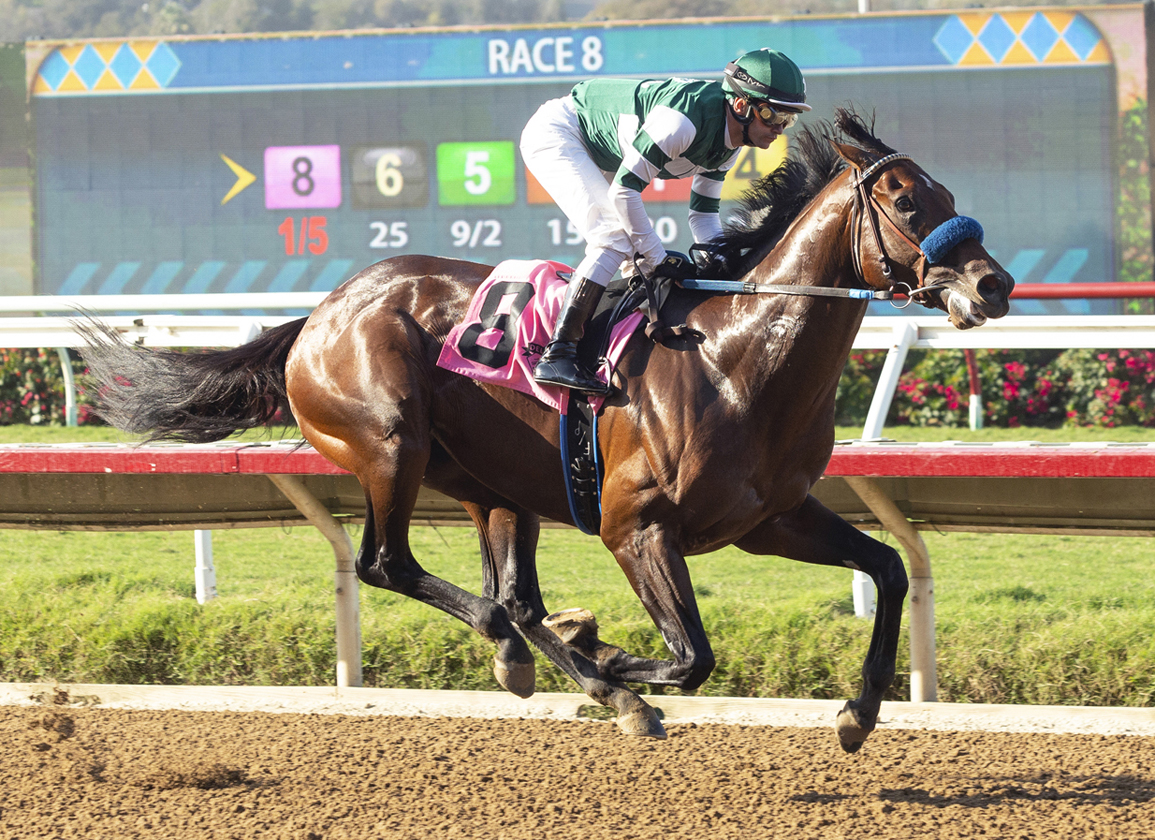 The bay earned an astronomical 114 Beyer Speed Figure for the effort, the co-highest rating recorded throughout all of the 2021 season.

After flirting with a potential start against older horses in the GI Breeders' Cup Sprint at Del Mar last month, Flightline instead began gearing up for the seven-furlong Malibu versus fellow sophomores with five workouts since Halloween, most recently breezing a bullet five-eighths in :59.60 (1/28) at Santa Anita Nov. 28 (video).

“Very very happy with the way he's been,” Terry Finley said while checking in from Ocala on West Point's yearling class of 36 strong.

“John Sadler was able to give him a little bit of a blow after the Del Mar race. I know he's right on target, and is very comfortable. John just really thinks he's a special horse and a special talent. Everybody in the partnership is anxiously awaiting Christmas time and opening day at Santa Anita. It will be a good test. The water will be a lot deeper. Dr. Schivel (Violence) is a multiple Grade I winner and just got nipped in the Breeders' Cup Sprint. It's gonna be a formidable task and we are excited to see how he responds and runs against a really good group of horses.”

Finley continued, “It's very tough individually to buy these kind of horses anymore. The market has been white hot and it's a long way down when you spend $1 million for a horse all by yourself. It's easy to say, but this is a really good group of people and experienced. Everyone knows the ups and downs and has been around a long time. We all get along really well and we're all rolling in the same direction, which is absolutely essential in these type of partnerships.”

Flightline previously debuted with an equally impressive 13 1/4- length jaw-dropping 'Rising Star' performance at Santa Anita Apr. 24. So why all the time between starts? Is Flightline just too fast for his own good?

“People do ask all of us this on a regular basis–it was a simple foot bruise that kind of caused us to have to back up after his debut,” Finley responded.

“We all thought we had a special talent before he even ran. It's rare–very few horses run that well in their first start. And then he just had a foot bruise. It was nothing else. You could see his works. John took his time with him and we pointed for that race at the end of Del Mar. I'm not sure there's ever been another horse that has run a 114 Beyer in his second start. John is the captain of the ship and we all agreed that it would be the best thing in terms of development for this colt to bypass the Breeders' Cup Sprint and point for the Malibu.”

The versatile Feathered captured the grassy 2015 GIII Edgewood S. and was also second in the GI American Oaks and GI Starlet S., and third in the GI Frizette S. Feathered has a Tapit colt of 2020 ($390,000 FTSAUG RNA) and a Curlin colt of this year in the pipeline. She was bred back to Into Mischief.

“We all know these are the kinds of horses that we're all shooting for the stars with,” Finley concluded. “When you get one like this, it's absolute magic on a big scale. We're blessed– it's a cool thing to be part of the ride with a horse like this. I don't think that we've ever had the kind of anticipation that's starting to build as we have for this horse in the Malibu.”