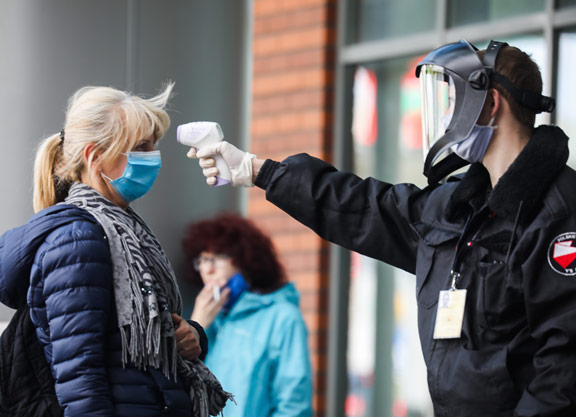 Even before their stabling areas officially begin readmitting horses next week, Churchill Downs and Keeneland are already working in tandem to provide on-site COVID-19 testing of backstretch workers and licensed personnel who will be involved when racing resumes at Churchill May 16. A negative result will be required to gain access to both racetracks.

The mandate of swab testing for all Kentucky racetrack personnel exceeds the scope of recommendations published May 7 by the National Thoroughbred Racing Association (NTRA).

Bob Elliston, Keeneland’s vice president of racing and sales, told TDN on Saturday that his association just filed a backstretch reopening plan with Kentucky officials, and that he believes the inclusion of testing protocols will enable new shippers to join the 650 horses already stabled at Keeneland if the plan gets approved.

“We sent protocols to the governor’s office [on Friday],” Elliston said. “They’re reviewing them this weekend, and we’re hopeful to open our backside next week to an additional 400 horses. We’ve been doing health screening and temperature checks for almost two months, and it’s served us well. But as we think about the addition of new people coming with new horses for summer stabling, we’re taking those next steps and [expanding to include] testing protocols.

“Churchill’s already begun that,” Elliston added, referencing the COVID-19 testing that greeted some licensees arriving at Churchill over the past few days, and also at Fair Grounds in New Orleans, where Kentucky-bound horses and workers are shipping out. “Churchill will be allowing horses on their grounds May 11. We’re hoping to get open perhaps as early as the 13th. We want to get these folks back into the state and get an opportunity to run for those purses at Churchill because, unfortunately, they didn’t get that opportunity in April with us.”

Churchill’s corporate communications office has yet to respond to a Friday interview request asking for what horsemen should expect regarding the logistics of COVID-19 testing.

“The good news about how we are approaching it in Kentucky is that the tracks are working cooperatively,” Elliston said. “Both Churchill and Keeneland are sourcing private testing capabilities so that we are not contingent or we’re not in competition with the public health officials who are doing testing in our region.”

Elliston said the private medical company the two tracks have contracted with for testing is the Lexington-based firm Wild Health. A “Strategy” web page on that company’s site describes the practice as specializing in “genomics-based personalized medicine” as well as disease prevention and treatment.

Asked if it was difficult to obtain large-scale testing, which has been in shortage in some parts of the country, Elliston said the key to the process was working with state health officials while focusing on local testing resources.

“The costs of the testing are not extravagant,” Elliston said. “[Wild Health] got them to a point that they are a manageable resource. And honestly, in this day and age, with the severity of the consequences of being positive, particularly at an at-risk population, money shouldn’t be an inhibitor for doing the right thing.”

Elliston said Keeneland is picking up the entire cost for testing that will be done on its property, and licensees will not have to pay any portion of it.

Elliston said the Keeneland testing would initially start with just horse-care personnel who plan to live on the grounds. Later, as Keeneland sorts out options for potential summer racing and the eventual September sale, more licensees will be required to get tested. There have been no known coronavirus positives at Keeneland this year.

“We’re looking at it in two different phases. There’s the racing component, and obviously, the September sales component,” Elliston said. “We’re hopeful that sometime this summer we can pick up some of the [spring meet racing] days that we lost.

“This really leads us into September in a big way. We know there’s going to be some disruption. Not only do we have to ensure that we have the protocols necessary to bring those people onto our grounds, but we’ve got to send a message to those people that we’re doing everything we possibly can to keep them safe when they do come here.

“We talk about these testings and these personal protection equipment requirements, and there are places where some folks find those intrusive and maybe too much,” Elliston continued. “But quite honestly, I find a lot of folks really want to be assured that we’re doing everything we can to keep them safe when they come to our grounds. And that’s the biggest part about it. It’s not a money situation. We’re going to do what it takes.

“And the beautiful thing about it is we’re working cooperatively with the other sales companies,” Elliston said. “With Fasig-Tipton, the other sales company in town, we’re going to develop a common set of protocols so when folks shop at Fasig earlier that week in September and then come to our grounds, there’s going to be continuity in those programs.”

Fasig-Tipton president and chief executive Boyd Browning Jr. told TDN that exact plans for his firm’s sales are still being formulated. The first auction is expected to occur in Maryland.

“It’s going to depend on the various jurisdictions and the timing when the various sales occur,” Browning said. “I would envision that the next sale on our calendar will be the Timonium sale at the end of June [29-30]. Certainly, social distancing will be required. I suspect there might be provisions with regards to masking and that temperatures will be taken and people will have to fill out health questionnaires before you can gain access. Also there may be some limitations on personnel. You will see many of the things we are seeing with protocols around the country with other businesses, including racetracks…. We are still continuing to get guidance from the state of Maryland. They don’t have a definitive date to resume racing yet, so it’s impossible to answer that question.”

Browning continued: “We are going to be responsible and we will be responsive to the conditions and do everything we can to conduct sales in a safe environment. We will work with local health officials to make sure that we do everything that is necessary. We are looking forward to getting back in the auction ring and providing opportunities for the folks to sell horses and sooner rather than later.”

Outside of Kentucky, Tom Ventura, the president of Ocala Breeders’ Sales Company (OBS), said he wasn’t certain if testing would occur at upcoming auctions in Florida.

“I don’t know if we are that point where we could provide testing for people who are at the sales,” Ventura said. “To provide testing and then deal with the turnaround time for results, I don’t think that is feasible.

“We plan to see to it that there are a minimal amount of surfaces that people can touch,” Ventura continued. “We will be keeping all our interior doors open. We have doormen opening exterior doors. Proper spacing and things like that. Hopefully, we are on the tail end of this and are going in the opposite direction. Those protocols worked for us in March and we may enhance them as we have learned things along the way. Whether or not mandatory masks or facial coverings, that hasn’t been decided yet.”

Asked what OBS learned from conducting one sale already amid the COVID-19 outbreak, Ventura added, “People have become more aware of the situation and things they needed to do to be safe themselves. So as far as what we did initially [in March], people have learned even more…The other thing you will see, and it is happening with all sales companies, is that there will be some ways to bid for people who aren’t there. We really ramped things up so far as phone bidding goes. We had a bank of phones in March. This time, there will be the availability of phone bids and online bids. We will be taking extra steps for people who can’t be here or don’t feel comfortable being here.

As tracks and sales companies are rolling out reopening plans, many are looking to the NTRA’s newly published “best practices” protocols for guidance.