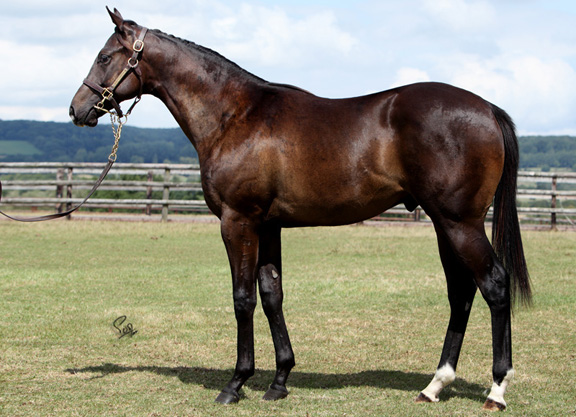 A colt by Dabirsim topped the final session at Osarus

The Osarus September Yearling Sale finished its two-day run on Thursday with improved figures across the board, most notably a clearance rate of 78%, up from 73% last year.

The sole yearling by Dabirsim (Fr) (lot 226) in the Osarus September Yearling catalogue benefited from the rarity factor and the excellent season currently being enjoyed by his sire when leading trade on the second day at La Teste at €85,000.

Hailing from a good Juddmonte family, the Haras de Grandcamp-consigned colt is the first foal of Clutter (GB) (Three Valleys) who is out of a sister to Zafonic and Zamindar, and was bred in France by Liam Norris. He also represented a good pinhooking result for Federico Barberini, who bought him as a foal at Arqana for €10,000. We can expect to see him return to the sales ring before too long as he was one of two purchases at Osarus for leading French breeze-up consignor Paul Basquin of Haras de Saubouas, who also signed for an €80,000 daughter of Siyouni from Faras d’Omméel on the opening day.

Eric Lhermite’s Haras de Grandcamp, which also stands Dabirsim, ended the sale as leading vendor, with 10 sold for a total of €286,000.

Dream Ahead is also having a good season with his runners and one of his sons (lot 147) hit the sale leader board when selling for €80,000 to ITS Bloodstock. The half-brother to nine-time winner and Listed-placed Princess Leila (Fr) (Slickly {Fr}) was consigned by Haras des Granges.

As well as enjoying a good pinhooking coup, Barberini was kept busy throughout the sale, signing for a total of 11 yearlings, including two on behalf of Middleham Park Racing. On Thursday, his top pick was lot 247, a filly by Wootton Bassett (GB) out of the winning Storm Cat mare Faviva bought from Haras d’Etreham for €60,000. The 10-year-old mare has already produced a treble winner, Ipanemo (Fr), by Wootton Bassett’s sire Iffraaj (GB) and is a grand-daughter of Group 1 winner Coup de Genie, whose descendants include the fellow top-level winner Bago (Fr) and Maxios (GB).

Gerard Augustin-Normand is no stranger to racing horses in partnership and he has embarked on a new cross-Channel association with Middleham Park Racing through the purchase of lot 204, a son of his popular stallion Le Havre. The colt out of the Group 3-placed Belliflore (Fr) (Verglas {Ire}) will go into training in Britain with Richard Hannon after being bought by Nicolas de Watrigant and Sylvain Vidal for €45,000.