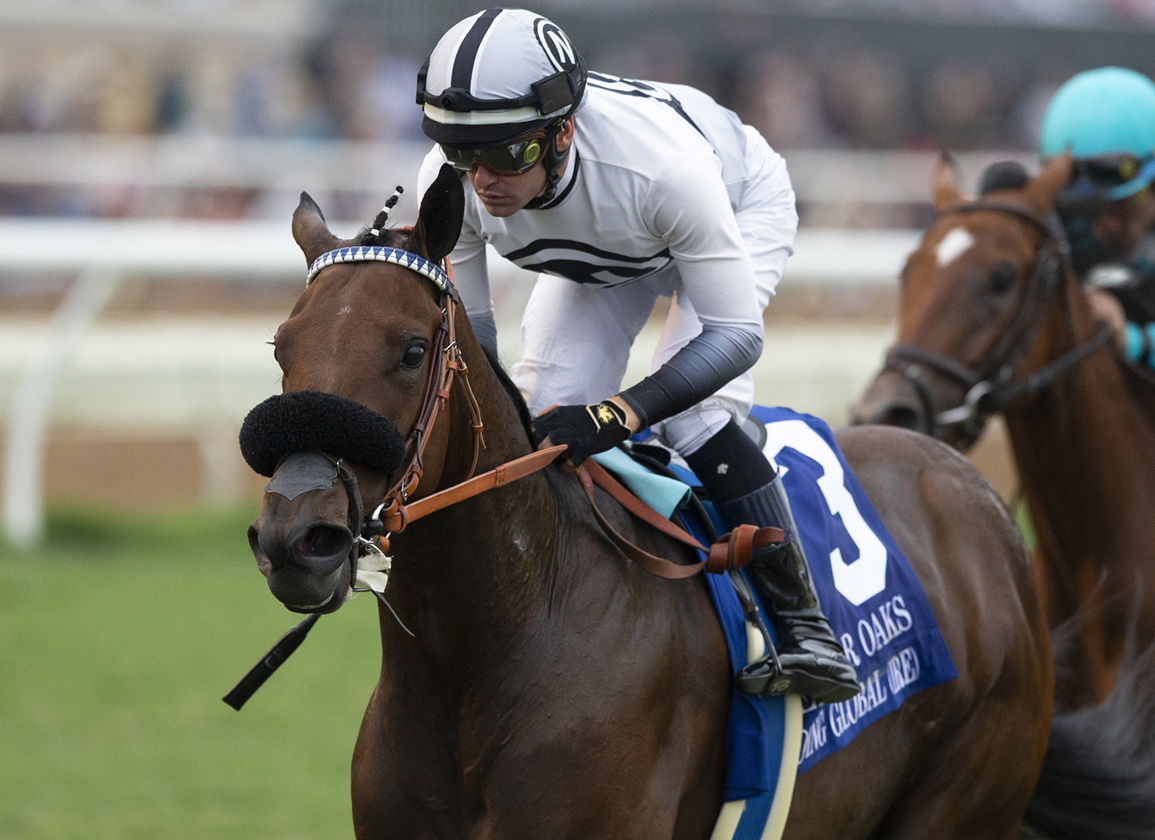 Plenty of imports into the clogged Southern California shipping terminals of Los Angeles and Long Beach have been left idle these past few months, collateral damage in a supply-side bottle-neck.

Imports into the Southern California stable of Phil D'Amato, on the other hand, have been far more effectively commandeered.

“It's a really good strategy for owners to help them make money and have fun in the process,” says D'Amato, caught mid-morning between scrutinizing his trainees jog a dusty Santa Anita horse-path under a blazing hot sun and a scouting trip to Del Mar in preparation for the annual coastal caravan south.

D'Amato's “strategy” is a reference to his equine pipeline from Europe which, unlike the Nord Stream twins out of Russia, doesn't appear at risk of any imminent shut-off–not if recent results are any guide.

D'Amato's record-setting 67 victories this past Winter-Spring meet at Santa Anita–57 of them on the turf and 16 of them in stakes–included the ex-Euro winners of the GII Royal Heroine S. in Going Global (Ire) (Mehmas {Ire}), the GIII Senorita S. in Island of Love (Ire) (Kodiac {GB}), and GIII American S. in Hong Kong Harry (Ire) (Es Que Love {Ire}).

A glance through some of D'Amato's less starry winners these past six months illuminates another intriguing pattern–that a good number of those purloined from Ireland come with report cards largely empty, save the odd check mark or two at some of that country's more pastoral venues.

“It's trying to get those diamonds in the rough at the right time for the right price and Dundalk seems to be the right venue to do that,” says D'Amato.

Such rare mineral scavenging has unearthed the recent winners Rhea Moon (Ire) (Starspangledbanner {Aus}) and Ma France (Ire) (Caravaggio), both placed at the East Irish track before their relocation Stateside, as well as Gold Phoenix (Ire) (Belardo {Ire}) a winner at Dundalk last year before finishing runner-up in the GII Charles Whittingham S. in April.

Why the smaller Irish tracks? Thrift, for one.

“It's just an easier venue to buy out of,” explains D'Amato. “You can buy a horse on the upswing, one that's going the right way, versus if they've run at the Curragh or Newmarket or Ascot, what they're going to be asking for it.”

That, and with fewer tracks to review, “you have a better line on the form,” he added.

The way D'Amato describes it, he and his fellow Transatlantic bargain hunters–bloodstock agents Niall Dalton, Michael Donohoe and Craig Rounsefell–have honed their operation into something of a well-oiled machine.

Think the East India Tea Company, only with none of that, how shall we call it–colonial baggage.

“It's everyone kind of working together to keep the wheel moving–us buying them, then developing them and getting rewarded for that,” he says, without hesitating to spill the tea on any trade secrets. “It's all of us watching these races every day and trying to find the horses that we think have talent.

“Niall and Michael have great relationships over there with the trainers and know which horses they think would be appropriate to buy. The right kind of style to fit in California,” he adds.

And what style is that?

“Really, most of these Europeans are small, so, you've got to kind of put that in the back of your mind, that you're not going to find these imposing 16-hand tall horses. You're going to find these smaller athletes. But at the same time, usually, these lighter made horses, if they can take to the surface here, they're easier on themselves,” he says, adding, “I can't emphasize enough that I think the more time you give them to acclimate usually the better rewarded you are when you run them.”

Right now, says D'Amato, with prizemoney in Ireland and England especially in such palliative care, the overseas market is ripe for plunder, many smaller outfits, in particular, relying more and more on the selling of their young stock to keep the bloodhounds from snapping at their heels.

“For most of them, this is what they do for a living. Most of them are traders with the way the purse structure is there,” D'Amato says. “Those are the people that are in it really to buy yearlings at a cheaper price and develop them and potentially sell them for a nice profit at two and three.

“And yeah, we're definitely not looking to buy off the Aidan and Joseph O'Briens of the world there because number one, they're not sellers. And two, their stock is–they're just very well-bred expensive horses, so that just doesn't fit what we're looking for.”

Mention of the O'Briens gives rise to recent news of the prodigal son setting up a small satellite operation at Saratoga this summer.

What if the young O'Brien–or some comparable European stable–decided to set up a small hypothetical camp in Southern California, maybe even Santa Anita next winter? Would D'Amato welcome such a challenge on his home turf?

“Well, I mean, hey, so long as you can welcome the competition and it helps the races fill, I don't have a problem with it. I mean, the same goes if I were to ship horses to Saratoga or try to win a race elsewhere. We're all doing what we can do to try to win races.

“But yeah, Joseph O'Brien, I've definitely watched him from afar. And you can tell he's the kind of person that could definitely supersede what his father's done, just by how young he is and what he's accomplished already.”

The parallels between the scion of the O'Brien clan and D'Amato's emergence as a trainer in his own standing, fully out from under the shadow cast by his long-time mentor, Mike Mitchell, are too obvious to leave undrawn.

Indeed, in a little more than eight years, D'Amato has almost doubled the graded stakes haul of Mitchell's, thoroughly eclipsing his former boss' Grade I total already. And he's done it with minimal window-dressing.

Whereas many trainers proudly wear their grouchy irascibility like a colorful tunic at Mardi Gras, or court the press with quote-ready aphorisms designed for the next day's headlines, D'Amato's approach is a contradiction, no-nonsense and business-like, pleasant and personable.

Given what he's achieved already in the sorts of big races populated by names like Whittingham, McAnally, Frankel, Mandella and Drysdale, where does he see his burgeoning record when placed alongside those history makers?

“I guess in a sense, with the bar set where it is, we just want to continue to keep building on that and doing what we've done the previous meet. So, I definitely take it as a challenge. But those are the situations I thrive on. Yeah, I like the challenge of it.”

He adds, however, “When I start a meet, I never look at statistics and how I'm going to start the meeting and how many wins I expect. I always look at it from the perspective of putting the horses in the right spots and also giving them their best chances to develop.”

Such an approach helps to avoid being pigeon-holed as a trainer–the ultimate bete noir of the rookie looking to expand and grow a competitive barn.

For every young import in the D'Amato stable, green as the emerald grass they grew up on, there's an older American-bred as hard as a walnut husk with as many miles in their wheels as an old Ford Model T.

“The Red Kings (English Channel) of the world, they love and they thrive on running,” D'Amato says of his Kentucky-bred 8-year-old, still competitive in graded stakes even with more than 40 runs under his belt.

“I've got great owners and an operation where we can take our time and run them when they're ready to run,” he adds, in explanation. “We don't have to force them to run in spots just because this spot or that spot comes up in three weeks.”

Notably, D'Amato has achieved his upward trajectory at a time when getting a horse to the races in California has rarely been harder, given the suite of welfare measures implemented in recent years–measures, it needs to be said, that have helped situate California at the head of the nation in equine safety.

“I mean, it's definitely been a learning experience for every trainer,” says D'Amato. “But I think it just makes us focus on giving these horses breaks when they need time off. All my owners are in favor of that and I think it just helps the horse's longevity at the end of the day.

“It's always been one of my things, to give horses two, three months off after they've had their run for the year,” he adds. “But I think it really, I wouldn't say forces, but makes all these trainers realize it's probably a better way of doing things in order to keep these horses around longer, happier and healthier.”

With Del Mar just around the corner, D'Amato shared running plans for some of his stable stars and emerging lights.

Count Again (Awesome Again): “We're freshening him up. He likes a lot of spacing in between his races and he's doing well. But we'll run him in the [Sept. 3] GII Del Mar Mile and then maybe just wait until the Breeders' Cup Mile.”

Desert Dawn (Cupid): “Desert Dawn is going to take on older horses in the [Aug. 6] GI Clement Hirsch S. on the dirt.”

Leggs Galore (Bayern): “She is going to run in the [July 29] Daisycutter H. sprint.”

Going to Vegas (Goldencents): “Going to Vegas will probably wait to run in the [Sept. 10] GII John C. Mabee S. and then hopefully the GI Rodeo Drive S. at back at San Anita. That's our two-way plan.”

Bellabel (Ire) (Belardo {Ire}): “She's going to run opening weekend in the [July 23] GII San Clemente S. She's doing really well. She's this big, for a European, big gangly filly. [After her win in the Blue Norther S.] we put that race under her and just kind of gave her a little time, freshened her up. Now, hopefully, we can knock out some of these 3-year-old stakes, try to win the [Aug. 20] GI Del Mar Oaks with her down the road. That's kind of our master plan. But we've got to run in the San Clemente first.”

Says D'Amato of his Del Mar squad, “This year, knock on wood, I'm pretty deep in those [big] races. We've kind of freshened up, ready to go.”