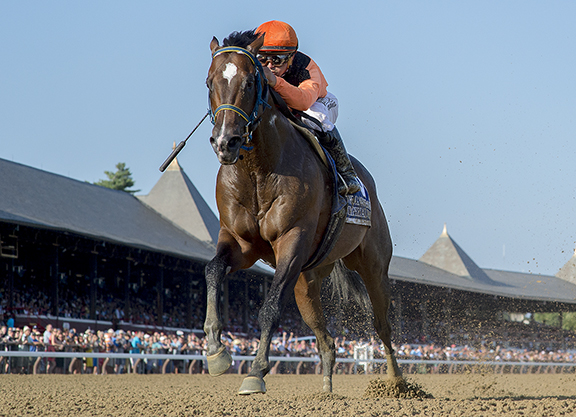 The small, but mighty Imperial Hint (Imperialism) looks to capture his second straight renewal of Belmont's GI Vosburgh S. Saturday and secure a spot in the gate for the GI Breeders' Cup Sprint. Prepping for last year's Vosburgh with wins in the GII True North S. and GI Alfred G. Vanderbilt S., the bay was third in the Breeders' Cup at Churchill Downs last term. Completing the trifecta in his seasonal bow in Tampa's Pelican S. Feb. 16, he was sent to Meydan, where he finished third once again in the G1 Dubai Golden Shaheen Mar. 30. Given a bit of a breather after that journey, Imperial Hint made his American return a winning one with a four-length triumph in Saratoga's Alfred Vanderbilt July 27, stopping the clock in new track-record time of 1:07.92. Finishing third that day was divisional leader Mitole (Eskendereya), who came back to win the GI Forego S. at the Spa Aug. 24.

“He's come out of the Vanderbilt great and been training up to the Vosburgh in good form,” said trainer Luis Carvajal, Jr., told the NYRA notes team. “We know he likes Belmont. This race comes at the perfect time, setting us up for the Breeders' Cup which is a plan we had at the start of this year.”

While Mitole will sit this one out, Vanderbilt fourth-place finisher and Forego runner-up Firenze Fire (Poseidon's Warrior) will take another shot at Imperial Hint. Winner of the 2017 GI Champagne S., the bay captured the Runhappy S. at Belmont in May and was fifth to Mitole in a salty renewal of the GI Met Mile June 8.

American Power (Power Broker) is an intriguing longshot taking a big leap up for trainer Linda Rice. The chestnut enters off a trio of late-closing victories this summer, taking two allowances at Parx June 29 and July 29 and most recently winning a start optional claimer at Saratoga Aug. 29. He should get plenty of pace to run into here and could charge up late to get a piece with Jose Ortiz aboard.

Promises Fulfilled (Shackleford), a disappointing sixth in the Forego, will scratch from the Vosburgh in favor of a title defense in next weekend's GII Stoll Keenon Ogden Phoenix S. at Keeneland.