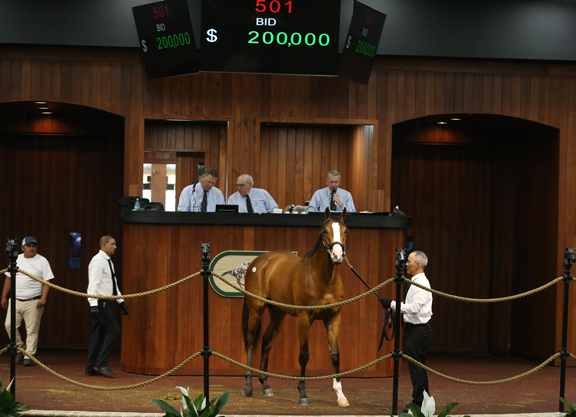 A lifelong racing fan, Angelo Freda decided to make his dream of racehorse ownership into a reality and, along with his son James, started Ilium Stables with the purchase of two yearlings at the 2018 Keeneland September Yearling Sale. Already with a stakes winner on its resume, the stable added a daughter of Into Mischief purchased for $200,000 at last week’s OBS March sale.

“This is something that I always had a dream about doing,” Angelo Freda said. “But I didn’t want to do it alone. My son does a lot of riding and I asked him if he wanted to get involved with me and he did. So we both decided to go ahead and do it.”

The father-son team enjoyed quick success with one of those initial purchases at Keeneland in 2018. They acquired Jezebel’s Kitten (Kitten’s Joy) for $40,000 and under a year later, the filly became the stable’s first stakes winner when she came home 4 3/4 lengths in front in the $500,000 Exacta Systems Juvenile Fillies S. at Kentucky Downs (video).

“Jezebel’s Kitten has turned out to be a real hero for us, she’s great,” Freda said. “And she’s got a great personality.”

Asked what it was like to watch his first stakes winner, Freda admitted, “We were kind of in shock at the time.”

For the Fredas, the day at Kentucky Downs had already been a win before the Brad Cox-trained Jezebel’s Kitten even stepped out on the track.

“We had heard so much about Kentucky Downs, with the European-style track and being partial to turf racing, we really wanted to go,” Freda said. “We just enjoyed our experience at Kentucky Downs. We loved the people there. It was just a great day. And then we got around to the race and we said, “As long as she makes a good showing for herself, that’ll be fine.’ About halfway through the race, we thought that she had just given up because she fell back to sixth place from second place. So we were getting pretty well resigned that she wasn’t going to do so well. Then all of a sudden, she bolted out and past everyone. It was an amazing race and we were so happy.”

Freda, a financial advisor born in Italy, raised in the Bronx and now based in Connecticut, and his son, an attorney and Judicial Affairs Officer at the United Nations, enjoy the racing, but have even bigger plans for their fledgling stable.

“We wanted to build a stable for not only racing, but also breeding,” Freda explained. “And we also want to have a retirement farm for these horses. So we want to do the whole thing. Racing is our way to start learning what these horses are all about. But it’s not the only plan that we have. The breeding side and taking care of these horses is also what we want to do.”

The nine-horse Ilium Stables is currently spread out between three trainers.

“We have a few horses with Catherine Day Phillips–we have a couple of Ontario-breds, including a Union Rags colt (hip 1022), and we have a couple of fillies she wants to take on,” Freda said. “So she’s going to have a total of four horses for us. Then we brought on Bill Mott and he is going to be training some yearlings that we bought last year. We bought a More Than Ready filly (hip 1324) and a Malibu Moon colt now named Ascending Moon (hip 1071) and he’ll be taking them on. Brad has Jezebel and he also is taking on this Into Mischief filly that we just bought. Who I guess reminds him of [Cox-trained champion] Covfefe because she looks just like her.”

The goal is ultimately for the stable to have between 20 and 25 horses, with a plan to buy four or five per year to start out. Whether the majority of those will be bought at the yearling sales or 2-year-old sales is still up in the air.

“We really don’t know where the best place to buy is yet,” Freda said. “When we speak to some trainers, they would prefer that we buy yearlings because they feel they can train them and imprint them the way they want. Our game plan is to try some at the 2-year-olds in training sales and try some at the yearling sales and see where we have the best results. And then we will go from there.”

When he headed south for last week’s OBS March sale, Freda had a mandate from his son.

“We are always looking for the best athlete, is what we’re looking for, with a bias towards the fillies,” Freda said. “At the OBS auction, I was under strict orders from my son to not come back with a colt. At the yearling auction, I ended up with two colts and I was supposed to end up with two fillies. But the colts were so beautiful, I couldn’t turn them down. But this time, I was under strict instructions, ‘You are not to come back with a colt.’ So we got a filly.”

With the help of advisor Suzanne Smallwood of EQUIX, Ilium added a daughter of Into Mischief (hip 501) to its roster with a final bid of $200,000 last week. Freda thinks the uncertain climate surrounding the auction made the purchase possible.

“Into Mischief was always my target from the first day,” Freda said. “When I told Suzanne the budget, she said, ‘It’s not going to happen. It’s just not.’ But this time around, Suzanne said, ‘Based on the way the market is going, I think this one is going to fall in your budget. She is worth a lot more than what you’ll pay for her.’ So this was my opportunity to get one. When I saw her, I was in love with her. And that was it. She’s beautiful. We are thrilled with her.”

While still building his racing and breeding knowledge, Freda credits his team of advisors for helping get Ilium Stables off the ground.

“I always think I know everything, but I do have advisors,” he said with a chuckle. “I like Suzanne because she can put me in my place, which I really need. But she is really great and we’re really happy with her. And then we give them to Paul Sharp to break and then we move them on to the race trainers. I think we have a good team around us to help us.”

A key component of attracting, and keeping, new owners in the game is education, according to Freda.

“At first, we didn’t know what we were doing,” he said. “But we are getting better. The frustration is, with some of these trainers, they just don’t take the time to teach owners what they are doing. I don’t know why that is. It seems to be an industry-wide problem. And we want to learn. We really want to learn. We’re getting there. We ask a lot of questions. We show up at the barn and we talk to the grooms, we talk to everyone. They are all hard workers. And we know how hard they work keeping these horses there.”

Freda concluded, “I wish the general public could go out there and see how hard these people work and how much they really want to take care of these horses.”