Idol Finishes Best of All To Take the Big 'Cap 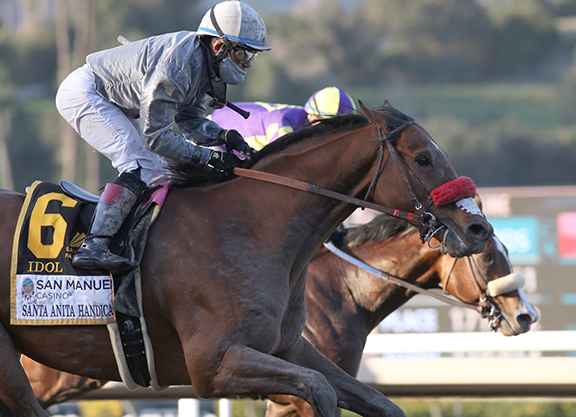 Calvin Nguyen's Idol (Curlin) seemed to relish the 10 furlongs of Saturday's GI Santa Anita H. as he turned the tables on Express Train (Union Rags) to post a mild 5-1 upset. Even-money invader Maxfield (Street Sense) could only manage third with no obvious excuse. Last seen finishing third as the favorite behind Express Train when trapped behind a slow pace in the Jan. 30

GII San Pasqual S., the bay was kept off the inside and unhurried as he sat second last. Last year's GII Lambholm South Tampa Bay Derby hero King Guillermo (Uncle Mo) provided plenty of pace through splits of :22.82, :47.12 and 1:12.26. Joel Rosario began to shake the reins at Idol heading towards the three-eighths pole, as Express Train and Maxfield mounted their own bids. Express Train stuck the front leaving the home bend, and Maxfield needed to find more as both Independence Hall (Constitution) and Tizamagician (Tiznow) got in the mix. Idol, meanwhile, continued to plug away down the center, found his best stride in midstretch and bounded to the front with good-looking strides to notch a breakthrough victory.

“My horse loves this distance,” Rosario said. “I just wanted to keep him away from the rail and he handled it easily. He responded when it came time to run and he had some kick. I appreciate the opportunity Richard Baltas gave me for this ride.  I had never been on him. I watched all his races and I could see he tries hard every time. What a strong finish today!  He ran really big.”

Second in his six-furlong unveiling at Churchill Sept. 5, Idol graduated over an additional eighth three weeks later, good for a solid 94 Beyer Speed Figure. He dominated a 1 3/16-mile allowance under the Twin Spires Nov. 8, and finished up his late-starting sophomore campaign with a close second to re-opposing Kiss Today Goodbye (Cairo Prince) in the local

“I know he was running really hard around the turn, he was wide, he was far back but Joel said he didn't want any of the kick back in his face, so we took the wide route,” said conditioner Richard Baltas. “He's got a big lovely long stride so that's why we were thinking a mile and a quarter for sure. We needed all of Joel Rosario's power in the stretch to get him home. It was a great win, it's a race you dream about winning.

“It's unbelievable, I've been coming here since I was 13 years old. Before I even got to be a horse trainer, I saw all the greats run here in the Big 'Cap and  you never think that you're gonna be here but you keep working hard and God blessed you.

“[Owner] Calvin [Nguyen] came and claimed a horse with me named Freedom Crest, it was our first horse. I've had several different jobs back and forth, Calvin's always been a loyal guy and he wanted to come back. This was a blessing for both of us. Loyalty means a lot.”

“It's been a wild ride,” said Nguyen. “Richie's put together a great team and I'm just very fortunate to be a part of it. He's just a great guy, I've known him for so long. He works hard, he's a horse lover, he's here every day… You can't dream about this, we are just very fortunate and you enjoy it while you can.”

The lightly raced Idol became the 75th stakes winner for Curlin, who made the transition from two-time Horse of the Year to one of the country's leading sires. Standing at Hill 'n' Dale at Xalapa, Curlin has 37 graded winners, including additional 2021 GSW Clairiere, one of the early favorites for the GI Kentucky Oaks. The cross of Curlin over A.P. Indy is turning into a classic, with seven black-type winners bred on the identical cross as Idol, including GISW Global Campaign and GSW Malathaat. Super broodmare sire A.P. Indy also added to his ever-growing total of stakes winners out of his daughters, ending Saturday at 231 with Idol's initial Grade I score and Weyburn (Pioneerof the Nile)'s GIII Gotham S. Idol's dam, a listed winner, sold for $400,000 at Keeneland November when Idol was a weanling. Her 2019 filly, who hammered for $350,000 at last year's Keeneland September sale, is a full-sister to Idol. Marion Ravenwood also has a 2020 colt by Violence and was bred to City of Light for this term. Her fifth dam, Your Hostess, a full-sister to Kelso's sire Your Host, was granddam of 1969 Derby/Preakness winner Majestic Prince (Raise a Native) and great-great-granddam of 1998 Derby/Preakness winner Real Quiet (Quiet American).