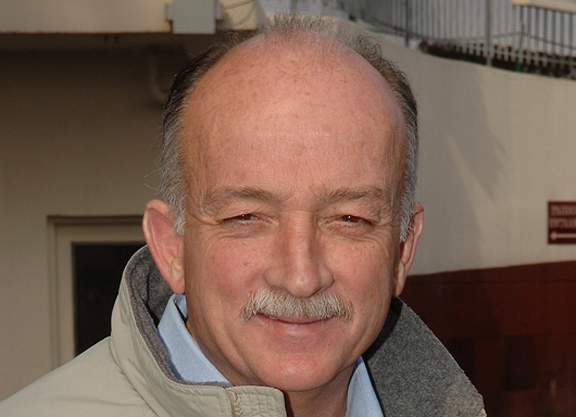 Trainer Mike Hushion, a respected mainstay on the New York Racing Association circuit, will bring the curtain down on nearly five decades in horse racing with his final two entries, Jupiter Rising (Exchange Rate) and Voodoo Song (English Channel) in the sixth race on Sunday, closing day of the spring/summer meet at Belmont Park.

Hushion, who will turn 69 Sept. 14, announced last month his plans to retire at the end of the meet, an ostensibly rare decision in a vocation that regularly sees trainers continue their craft into their 70s and even 80s.

“I think like anybody my age, I've been thinking about it for a while,” said Hushion. “My owners have all been wonderful and this is the right time for it, that's all. [The runners] keep us busy. It gives us a little something to do, but the winding down has gone pretty smoothly.”

Since he informed his owners, Hushion has spent the last few weeks quietly transferring horses–including those for longtime clients Barry K. Schwartz, Blue Bison Stable, and Chester and Mary Broman, among others–and helping to secure new jobs for his employees. In that time, he's whittled his dozens-strong stable down to a handful of starters on closing week, including the Schwartz-owned duo of Jupiter Rising, drawing post 12, and Voodoo Song on the also-eligible list, in a New York-bred allowance at a mile on the Widener turf on Sunday's closing day program.

“I've been with him for 25 years, so that pretty much says it all,” said Schwartz. “We've had a great relationship. He's a terrific guy and a wonderful trainer. It's sad to come to an end but I'm very happy for him. It'd be nice for him to win with one of them but, regardless, he's done such a great job with so many horses over the years. We've had some amazing times together, a lot of highs.”

Hushion, who battled leukemia in 2015 and has since gotten a clean bill of health, said his immediate retirement plans are to spend time with his three grown children, sons Ryan and Quinn and daughter Casey, and his “three and eight-ninths” grandchildren. His son, Quinn, and daughter-in-law are expecting their first child in the coming weeks.

The New York native saddled his first winner, Tugboat Ryan, at Aqueduct in 1975, and has amassed 1,426 winners with more than $52 million in purses through Thursday, mostly based at NYRA tracks.

“With my past experience, the one thing I was sure that I didn't want to do is go from here to basically the hospital,” he said. “I wanted to take some time and enjoy everything that's supposed to be in between. As soon as I made the phone calls to my owners, there's never been a doubt in my mind, and that's a good sign. My horses will be getting good care where they go, and I'll move on and see what happens.”

Hushion credited the unwavering support of his owners with making the transition as seamless as possible.

“He's been through so much with his owners and to get through that and survive it and be healthy, he's certainly entitled to enjoy himself now,” Schwartz said. “He's got grandchildren that he's very fond of, he's got three wonderful kids and, after working seven days a week for so many years, he wanted to spend more time with them. He's going to be doing what he really wants to do. He'll get to take it easy.”

Hushion was an economics major at the University of Oklahoma when he became enamored with horses. He had a friend back east who recommended him to trainer Allen Jerkens. Jerkens hired him, and Hushion spent six educational years working for the Hall of Famer, rubbing horses like Step Nicely, who beat Forego in the 1973 Jerome in record-setting time. Hushion ultimately served as an assistant trainer to Jerkens before going out on his own.

“Probably the horse I remember the most about was a horse I groomed, Step Nicely,” said Hushion. “He was just a tough guy in a lot of ways. Between working for Allen Jerkens and being around that bully, I learned a lot about horses. [Step Nicely] was a big-time overachiever. He went head-to-head with Forego from the top of the stretch to the wire and beat him in the Jerome. I think he gave Allen his first 2-year-old stakes winner. He ran against the greatest crop there ever was, in my opinion, the 1970 crop with Secretariat and all of them. You could name 20 serious horses out of that crop, and he held his own with all of them.”

Since taking out his trainer's license, he's maintained a 20% win rate over a 42-year career, running the gamut from the claiming levels to the graded stakes ranks.

In 1993, Hushion and Schwartz claimed Boom Towner for $50,000, who went on to win several graded stakes and more than $640,000 for the team. Hushion counts three Grade I wins among his many stakes victories, with Schwartz' 2012 Vosburgh winner The Lumber Guy (Grand Slam) and the Bromans' Artemis Agrotera (Roman Ruler), winner of the 2013 Frizette at two and the 2014 Ballerina at three, described by Hushion as “the ones who gave me the most thrills.”

In the current meet, Hushion has seven wins from 34 starts, including his most recent stakes winner T Loves a Fight, who posted a 2 1/4-length score in the Mike Lee on May 29. More importantly to those who know him well, Hushion leaves behind a breadth of knowledge and a legacy of humility and horsemanship.

“As a trainer starting out, he was always very supportive and has been a great personal friend through the whole process,” said trainer Leah Gyarmati, who worked and rode races for both Jerkens and Hushion before training on her own. “Huge kudos to him for being able to do what he's doing now, because there are very few people who can walk out of this business and still look forward to having years and years of fun…Little by little, this business is changing and we're really going to miss people like Mike. With all that he's learned, he's a great source of information and advice. He's a very, very good horseman and, integrity-wise, you couldn't ask for anyone better.”

Hushion still plans to spend much of the summer in Saratoga Springs, as he has for the last few decades, albeit with very different objectives this year. Instead of trying to win races, fishing and golfing will take top priorities this summer, said Hushion, who has stayed with Schwartz and his family the last few years.

“I love Saratoga like anybody else and I'll be able to take advantage of all the other stuff there,” Hushion said. “I'll find some things to do, I don't think I'll be spending too much time at the track. I think I'll know how to enjoy Saratoga: fish, play golf, go to dinner with friends. That doesn't sound like a bad couple weeks to me.”