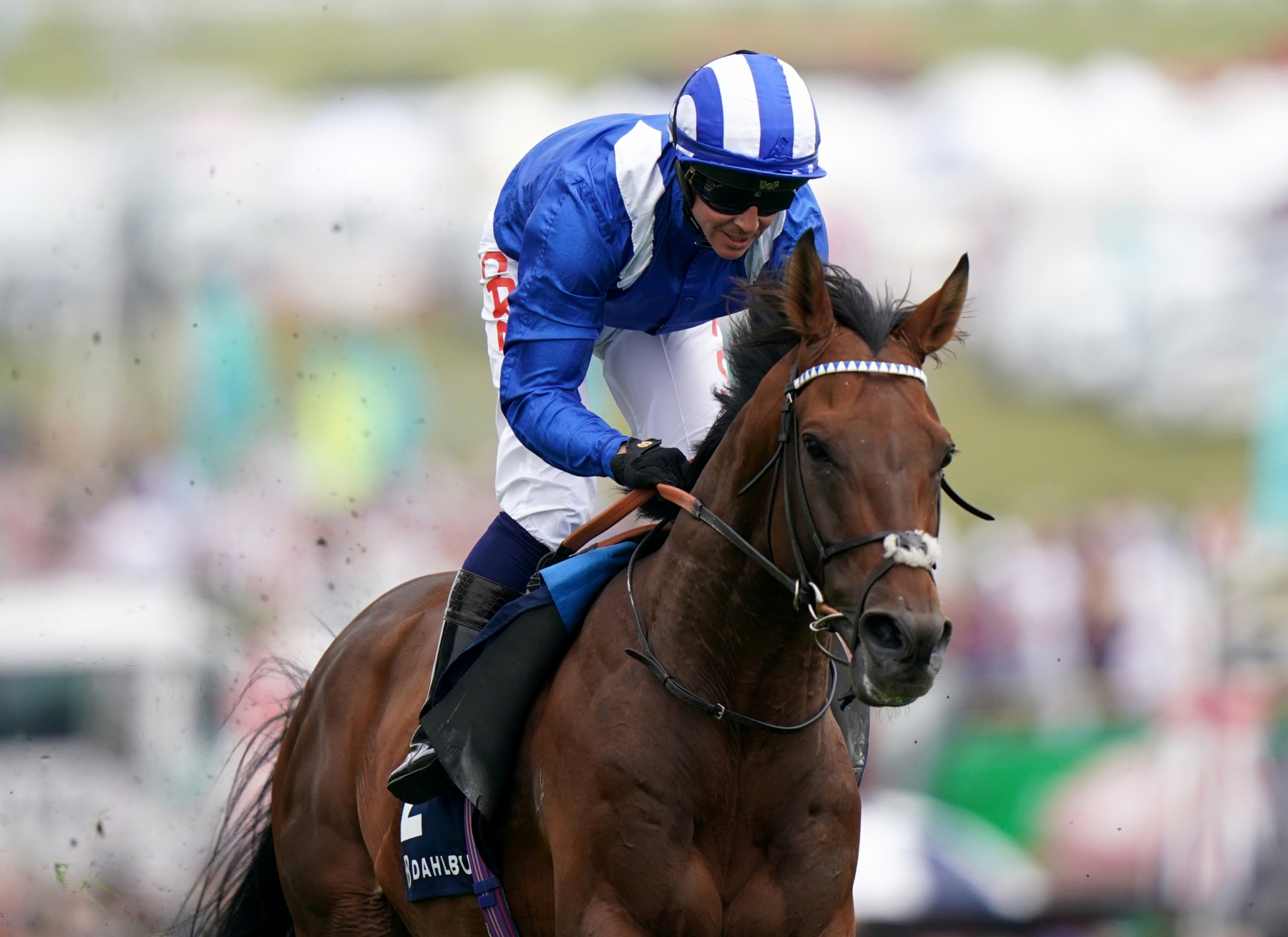 Shadwell's homebred 5-year-old entire Hukum (Ire) (Sea The Stars {Ire}–Aghareed, by Kingmambo) struck four times at Group 3 level in 2020 and 2021 before annexing Meydan's Mar. 5 G2 Dubai City of Gold and went postward for his European return in Friday's G1 Dahlbury Coronation Cup at Epsom coming back off a seventh in March's G1 Dubai Sheema Classic. Stepping out of the shadow of his hitherto unbeaten full-brother Baaeed (GB), he was unmatched in the closing stages of the 12-furlong contest and powered clear of a select field to secure a career high in impressive fashion. Hukum broke smartly and raced to the fore through the early strides before accepting a tow in fourth. Making smooth headway once leaving Tattenham Corner behind, the 11-4 chance loomed large on the bridle with three furlongs remaining and lengthened clear once hitting the front at the quarter-mile marker to easily account for last year's hero Pyledriver (GB) (Harbour Watch {Ire}) by 4 1/4 lengths. Aidan O'Brien trainee High Definition (Ire) (Galileo {Ire}) was a half length back in third with 9-4 second favourite Manobo (Ire) (Sea The Stars {Ire}) another 4 1/4 lengths adrift in fourth.

“He's been a wonderful horse for me, he's won numerous Group 3s and then the Group 2 in Dubai,” said winning trainer Owen Burrows. “He then ran probably his best race there in the Sheema Classic, when he was drawn a bit wide, they didn't go very quick and he was only beaten about a length-and-a-half. I always felt that there was one of these in him and I'm just thrilled he's done it for the team back home and also for the horse himself. I'm thrilled for everybody. We've got reduced numbers, but it's still a big thrill for me that I'm still training for Shadwell and for Sheikh Hamdan's family. Hopefully, this will document that we can get the job done and entice a few more owners and horses in. Timing wise, this has been brilliant. It's been a tough time and we've had to reduce the team, but the guys I've got left have been brilliant. They've really got their heads down and worked hard. John, my head man, rides Hukum all the time and is leading up today, my assistant Rob is back at home holding the show on the road. They are a great team and we'll celebrate this win”

Looking ahead, Burrows continued, “He was pretty impressive there and we'll have to get our heads together and see where we go next. It's important to have a little bit of juice in the ground, but he's pretty versatile. He'll be in the [G1] Grand Prix de Saint-Cloud at the beginning of July and he's in a German Group 1 in August. He's also in the [G1] Irish St Leger and then we possibly thought about Canada. I half intimated this might be his only sighting this year in England, but we might have to rethink that now. The [G1] King George [VI & Queen Elizabeth S.] would be the obvious one, but we'd have to see what the ground is like and have a chat with the team. He wasn't entered for the Arc originally, but he should get a bit of juice in the ground there and it's definitely an option.”

Winning rider Jim Crowley added, “What a difference a year makes. I got a lot of stick last year and had a much more willing partner this year. He's got high expectations with his brother, so it's nice to win a big Group 1 with him. Owen didn't tie me down, which was good. I've been in the game long enough now to do my own thing and at the top of the hill they were going quite slow, so I decided to press forward and get him into a prominent position so we could be close enough turning in. Everybody was looking at each other at the top of the hill and the last thing I wanted to do was to get caught flat footed coming down the hill. I was quite happy to go and sit where I did and the rest of it was easy. It could have gone wrong for sure.”

“We're thrilled to win a Group 1 with this horse, he's been so consistent and we've sort of set him aside for this,” said Shadwell's Angus Gold. “I thought Jim gave him a lovely ride and was in a perfect spot throughout. He was too good for them on the day and I think the horse deserved it. He's been incredibly consistent and in the shadow of his little brother, so it was nice to see him win at the top level.”

Reflecting on the performance of runner-up Pyledriver, trainer William Muir said, “He has run a tremendous race. Have we ever made the running, no, but he lobbed away in front so you couldn't make any qualms on that. Turning in, I'm thinking Hukum is cantering and he was better than us today. We've beaten him the last two times and he has beaten us today, there is not a great deal between us. We've run great and Hukum was on his day so well done to Owen. I thought he was lame, but Frankie [Dettori] said he was alright. They were going pretty steady, but I wouldn't make that any excuse because Frankie has dictated his own fractions and we haven't gone very fast. You wanted to be towards the fore and that's where the first two were the whole way round. On the day the other horse had that bit more in the tank than we did. He looked fabulous, the King George has now gone through my mind if he goes home and is really well. He is in the [G2] Hardwicke [at Royal Ascot], but after that and a long break I think we will go to the King George.”