How Steve Young Found the Bargain of the Year 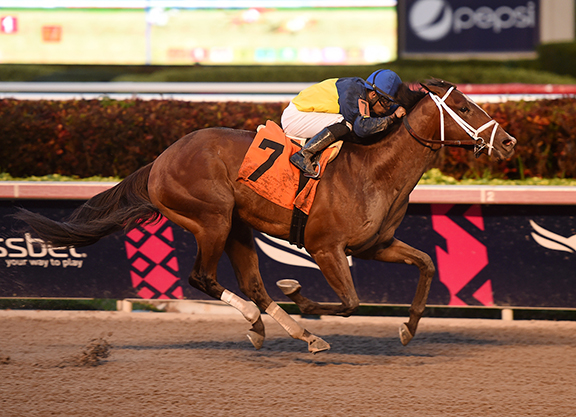 When Soldado (Verrazano) goes to the post in Sunday's 12th race at Gulfstream, a one-mile allowance, he'll look a lot like many Todd Peltcher-trained horses. He's a well-bred 3-year-old colt, won his debut easily and could prove to be any kind of horse. Then why did he only cost $8,000?

Steve Young, the bloodstock agent and owner who bought the colt at the 2018 Fasig-Tipton Midlantic 2-Year-Olds in Training Sale, has his theories, but he's more focused on the future than the past.

“I think he has the ability to move forward and run in the [GI] Kentucky Derby, especially when you watch him gallop out after his works and after his race,” Young said. “He compares equally to some of the really good 3-year-olds I have bought and trained. That being said, to get to the Kentucky Derby, we only have two months. A lot of good stuff can happen to a horse in the spring of their 3-year-old year and a lot of bad stuff can happen, too. He has time to get there as long as he doesn't take a step back. The only thing to do now is for him to get into the ring and fight and get experience.”

Soldado made his debut Feb. 2 and won a six-furlong Gulfstream maiden by 2 3/4 lengths while receiving a Beyer Speed Figure of 91. Young is a wheeler-dealer and let the word out that he was willing to listen to offers. He said he turned down several before selling a 50% interest in the colt to Lets Go Stables, which is led by Kevin Scatuorchio and Bryan Sullivan. They were also the owners of Verrazano. Young wouldn't reveal what price he got for the half-interest in the horse, but it's obvious that he made a substantial profit.

Young wasn't thinking about the Kentucky Derby or some day cashing in on selling part of the then 2-year-old when he first came across Soldado at the Timonium sale. But, he did believe he had found a horse that slipped through the cracks.

The first thing Young noticed was that Soldado had sold for $80,000 a year earlier at the Fasig-Tipton Kentucky Turf Showcase Yearling Sale. He marked him down as one to watch and liked what he saw when he worked.

“He didn't have that fast of a breeze, but I loved the way he did it and the way he ran around the turn and showed his mechanics and athletic ability,” Young said.

Young estimated that, under normal circumstances, a horse with the pedigree Soldado had and with the sort of impressive work he had turned in, had a market value in the range of $400,000 to $450,000.

He believes the colt's potential price tag began to drop when fellow shoppers had him vetted.

“I don't know how many times he was vetted,” Young said. “When we vetted him he had, if you will, insignificant flakes, in both knees and ankles. He also had a bucked shin. I would imagine people were turned off by that. I don't know what other people saw, but that's what he had. What that does is it takes a bunch of people off of him.”

Young didn't think the colt's problems were that severe or anything that couldn't be corrected. So, he waited for Soldado to come into the ring. It was a long wait. He was hip 593 in a sale that had 600 horses in the catalogue.

“You also have to factor in when a horse is selling in the last seven numbers in a two-day sale,” he said. “It's dark. There's no one around.”

The consignor did not put a reserve on the horse and when the hammer fell, the bidding had stalled at $8,000 and Young had a new Verrazano colt as part of his team.

“With the way he breezed, if he would have vetted, he probably would have been a top six horse at that sale and was he going to bring five times what he cost as a baby,” Young said.

Young had vets repair the problems that apparently discouraged other buyers and then sent the horse to WinStar Farm to recuperate. When he was ready, he was sent to Pletcher's division at Palm Beach Downs. Young said he knew he had a good horse, but maybe not how good.

“Every day has been a good day since he arrived at Palm Beach Downs,” Young said. “I think I can speak for all of us that I thought he was very good going into his first race, but he was even better than I thought he was. To run in a race where a lot of people liked their horses, to run the last half-mile in :46 and then to pass a horse from a top farm ]Juddmonte Farm] and a top barn [Chad Brown] that liked their horses, that says a lot. And then he galloped out 10 in front.

“You have to feel that he wants to run further that six furlongs off that. He's a May 7 foal. It all leads us to be very exited. There's no ceiling so far as to what he might be able to do.”

Soldado could flop Sunday afternoon, he could win a few stakes races here or there, he might even win the Kentucky Derby. There's no telling.

But Young can already take his bows. He bought a good horse with a good pedigree for peanuts and sold half of him for a lot of money. It's not supposed to be that easy.