Hotter Than July At Tattersalls 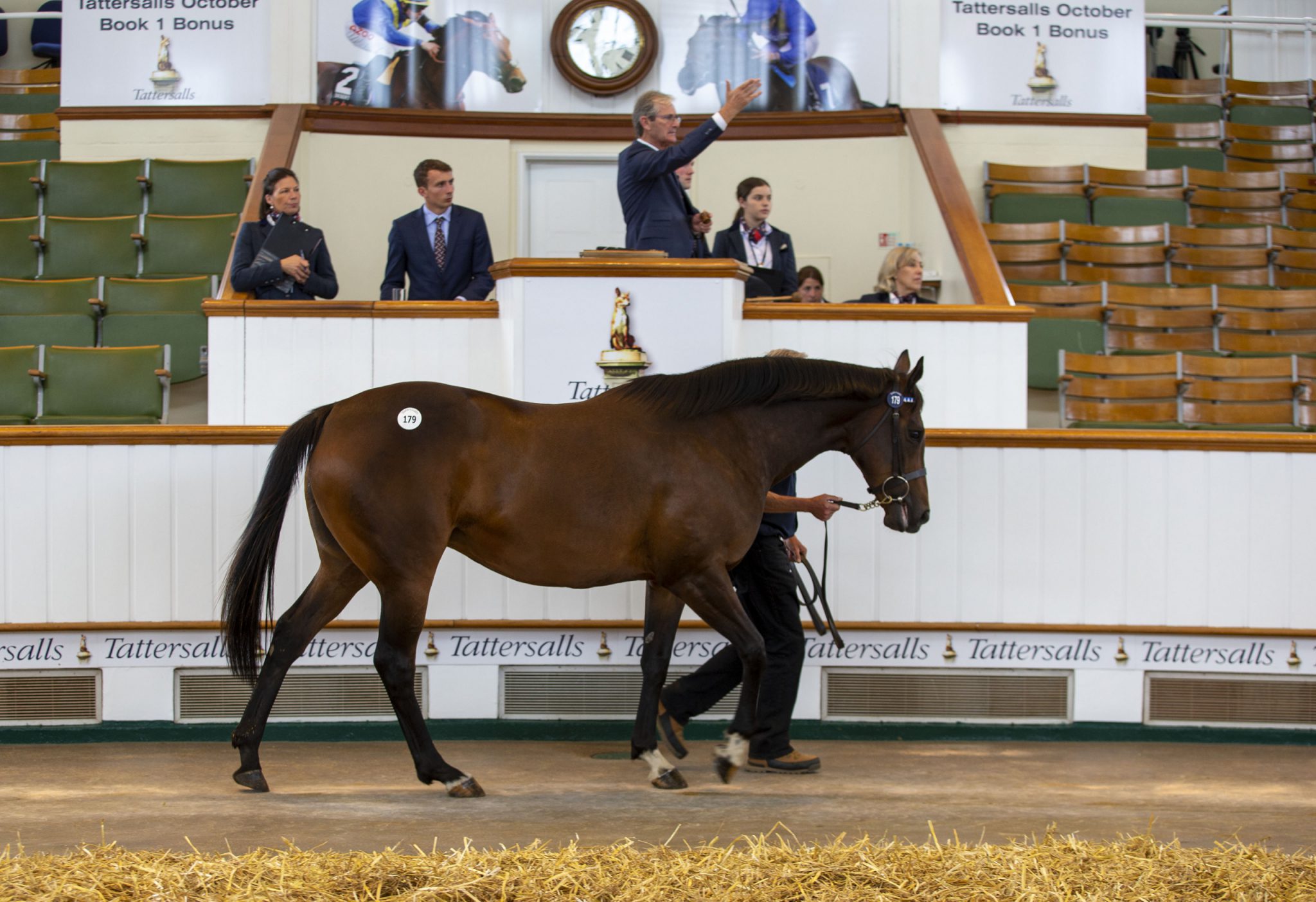 NEWMARKET, UK–The legacy of Sheikh Hamdan still casts a long shadow over the bloodstock world, and the influence of his bloodlines was once more evident at Tattersalls on Wednesday when Rihaam (Ire), a 9-year-old daughter of Dansili (GB) in foal to Dark Angel (Ire), led the first day of the July Sale at a new record price of 540,000gns.

With a buying bunch greatly enhanced by the returned freedom of international travel, several records were set at Park Paddocks, which saw the two top prices ever at a July Sale along with the highest turnover for a single session.

For that new record-breaker Rihaam, it was Tom Goff, standing with Paul Shanahan, MV Magnier and Timmy Hyde, who secured the unraced mare (lot 179). Her current 3-year-old Ribhi (Ire), a full-brother to the foal she is carrying, won twice last year and was third in the Listed European Free H.

“Of her age group she was the outstanding broodmare here,” Goff said. “It's an absolutely fantastic Sheikh Hamdan pedigree that goes back to Bahri. There's numerous stars all over the pedigree, and she's by Dansili.

“[Ribhi] is a good colt and she's carrying a full-brother to him. The Invincible Spirit (Ire) [2-year-old] is with Marcus Tregoning and is apparently showing some speed. The Blue Point (Ire), who is now a yearling, is a nice filly. It was a very good package and one that doesn't come along too often, and it's one of the reasons that the Shadwell dispersal continues to be of such interest.”

Indeed it does, and Shadwell was one of the leading consignors of the day with four sold for 696,000gns, but it was the Godolphin draft which really turned heads, with three of the day's top 10 lots emanating from the royal blue team, which, with 42 horses sold for 2,624,500gns, accounted for 30% of the day's total aggregate of 8,740,785gns–an upturn of 47% on last year's opening session.

Wild Rose Another To Pass Record

Wild-card entry See The Rose (Fr), a Group 3-winning daughter of Kendargent (Fr) and sister to listed winner Xaarino (Fr), was another to pass the previous high at the July Sale when bringing the hammer down at 500,000gns. Signing the ticket in the name of his London Thoroughbred Services for lot 271A was James Wigan, an accomplished breeder in his own right but this time acting on behalf of an undisclosed client.

Bred by John O'Connor of Ballylinch Stud, the daughter of the Xaar (GB) mare Xaarienne (GB) originally sold for €180,000 as a yearling at Arqana, and won three times in France for Andre Fabre as well as finishing fifth, beaten less than two lengths, in the G1 Poule d'Essai des Pouliches. She was unsold at 450,000gns at the most recent Tattersalls December Sale.

“She's very elegant filly,” said Wigan. “I saw her last December and she is a breeding prospect now rather than a racing prospect.”

The determined spending of Yuesheng Zhang of Yulong Investments continued apace at Tattersalls as the July Sale got underway, with the owner/breeder bidding more than 1.8 million gns for 10 broodmares or broodmare prospects through Michael Donohoe of BBA Ireland.

This group included the day's third-top lot at 450,000gns, Shining Bright (Ire) (Galileo {Ire}), an unraced sister to this season's G2 King Edward VII S. and G3 Chester Vase winner Changingoftheguard (Ire). The 4-year-old was sold in foal for the first time to Starspangledbanner (Aus) and was bought by Michael Donohoe of BBA Ireland for the Lucky Vega syndicate.

“Mr. Zhang was in Ireland last week and saw Lucky Vega and is keen to support him next season and is determined to give him every chance,” said agent Michael Donohoe of BBA Ireland of the owner's G1 Keeneland Phoenix S winner and G1 S James's Palace S runner-up who is now resident at the Irish National Stud.

“[Yulong CEO] Sam Fairgray will decide but this mare will probably go back to Ireland and be covered by Lucky Vega next spring. There was obviously a nice update to the pedigree at Royal Ascot and we have his 2-year-old full-brother, too.”

Lucky Vega will also have the Galileo (Ire) mare Footprints (Ire) pencilled in for next year's book after Donohoe went to 340,000gns to secure the 3-year-old on Zhang's behalf. The unraced sister to the four-time group winner Armory (Ire) was covered in May by Wootton Bassett (GB) and was sold by The Castlebridge Consignment as lot 271.

Matt Houldsworth made a determined effort within the ring to buy lot 33, the 3-year-old filly Le Designe (Ire) (Siyouni {Fr}), but in the end it was the online bid, again made on behalf of Yulong Investments that brought the hammer down at 180,000gns. In training with Ralph Beckett for Marc Chan, the daughter of G3 Park S. winner Oh Goodness Me (Ire) (Galileo {Ire}) never made it to the racecourse but she has plenty on her page to recommend her as a broodmare. Her first three dams are all black-type winners and her half-sister by More Than Ready is already a black-type producer in Australia, and that is where Le Designe will be heading eventually.

🤩 lot 33, La Designe, is a filly by Siyouni @AgaKhanStuds out of the G3 winner Oh Goodness Me. @BBAIreland & @YulongInvestme1 were bidding online and went to 180,000gns to secure her. She was consigned by @violethesketh & @mimi_wadham. pic.twitter.com/vheGmrUi8Q

By the day's end, 10 horses had been bought under a number of banners through BBA Ireland for just over 1.8 million gns.

“It's been a busy day but I'm really pleased with the mares we've got,” said Yulong's chief operating officer Sam Fairgray. “Some will head to Australia, some will be bred up here to Southern Hemisphere time and then head down and others will stay here and visit Lucky Vega.

“I'd imagine they'll all make their way down to Australia in time but we want to support Lucky Vega. He had a fantastic first season here and we want to continue that support. I'd imagine a couple will be covered by Frankel (GB) before heading down but we haven't decided which ones yet. We'll sit down and work out where we go from here.”

The Yulong team visited Frankel (GB) earlier in the week at Banstead Manor Stud and Zhang has special reason to continue his support of the Juddmonte star, having bred and raced his Australian Group 1-winning Hungry Heart (Aus). The filly's dam Harlech (GB) (Pivotal {GB}) was the first purchase made by the breeder at the Tattersalls July Sale, for 60,000gns in 2016. She remained temporarily in Newmarket to be covered by Frankel to Southern Hemisphere time.

Andrew Black's Chasemore Farm is enjoying a fruitful season on the track and its paddocks will welcome a new recruit from the July Sale in the form of G1 Matron S. winner Chachamaidee (Ire) (Footstepsinthesand {GB}), who was bought on Black's behalf by agent Tom Goff at 200,000gns.

A star performer on the track for Sir Henry Cecil and Tony Evans, for whom she won four group races and was also runner-up in the G1 Sun Chariot S., the 15-year-old mare has produced two stakes winners, the G3 Pinnacle S winner Klassique (GB) (Galileo {Ire}) and recent listed winner Valiant Prince (GB) (Dubawi {Ire}), who struck in York's Ganton S. for Charlie Appleby after publication of the catalogue. Sold as lot 97 through DVA Equine Services, Chachamaidee has unraced youngsters by Sea The Stars (Ire), now two and three, and was sold with a Mar. 10 cover to young Shadwell sire Mohaather (GB).

“We've followed this mare for a while; I know this family very well,” said Goff. “She's a lovely old mare and I thought she looked amazing for her age. I liked the cover to Mohaather–I think he's an exciting young sire.

“I remember her Sea The Stars [2-year-old] as a yearling; he was a nice horse and is now with Hugo Palmer and he likes him. He has a Derby entry. So it's a great package and we're delighted to get her. We'll try to breed some fillies out of her.”

Chachamaidee was succeeded in the ring by her daughter For Henry (GB) (lot 98), an 8-year-old sister to Klassique who was offered in foal to Advertise (GB) and knocked down at 100,000gns to BBA Ireland.

🍬Chachamaidee gets a treat after selling for 200,000gns at the #TattsJuly Sale. This G1 winner is the dam of three winners and is currently in foal to Mohaather @ShadwellStud. She was bought by @BlandfordBldstk for @chasemorefarm. pic.twitter.com/Di5ni7ej2H

The sizeable draft from Godolphin had been well perused since the horses arrived at the sales ground and the ring quickly filled as the first batch came through around lunchtime. Tally-Ho Stud, which has no shortage of stallions available for their broodmare purchases, came out on top at 180,000gns from a prolonged bidding exchange for the juvenile winner First Smile (Ire) (lot 127), a daughter of the G2 Queen Mary S winner Jealous Again (Trippi) and Dark Angel (Ire).

After signing for the 4-year-old mare, who is in foal for the first time to Profitable (Ire), Tally-Ho's Tony O'Callaghan said, “We already have her half-sister and it's the type of family that just works for us, with her dam being a Queen Mary winner. She'll go to a Tally-Ho stallion.”

The sibling already in the paddocks in Co Westmeath is Covetous, an 8-year-old daughter of Medaglia d'Oro bought from Godolphin at Goffs five years ago. Her daughter by Kodiac (GB) was sold at last year's October Yearling Sale for 300,000gns.

Two men who are more than familiar with the Godolphin/Darley families are John Ferguson and Mark McStay, now independent agents in their own right who made significant purchases from the draft.

Ferguson's investment scheme Natalma Bloodstock opted for lot 130, Rainband (Medaglia d'Oro), a winner and listed-placed in France and out of the German Group 3 winner Fitful Skies (Ire) (Dubawi {Ire}). With Nelson Bunker-Hunt's outstanding racemare Dahlia (Vaguely Noble) as her third dam and the Group 2-winning Wajd (Northern Dancer) as granddam, plus a foal by Invincible Spirit (Ire) in utero, the 4-year-old looks to have been well bought at 135,000gns.

“She comes from one of the great families: High Hawk, In The Wings, and Alexandros up there very close,” McStay commented. “It's a family I knew very well during my time with Darley and these families don't come up very often so you have to bid bravely when they do. She's a nice mare and she has bred a Group 1 performer already.”

The mare was sold with an early cover to Derby winner Masar (Ire), who has already found favour with McStay.

“His foals were nice and we pinhooked two of them last year for our foal syndicate,” he added.

BUY OF THE DAY

Dermot Dwan of Kellsgrange Stud did not have to spend much to take home the prize for buy of the day.

Holloway Boy's Listed Chesham S. success did not feature on the catalogue page but Dwan couldn't be accused of being asleep at the wheel.

Given that Holloway Boy is open to any amount of improvement, and his place in the pedigree may have gone unnoticed by many, time might prove the 13,000gns Dwan parted with to be money well spent.