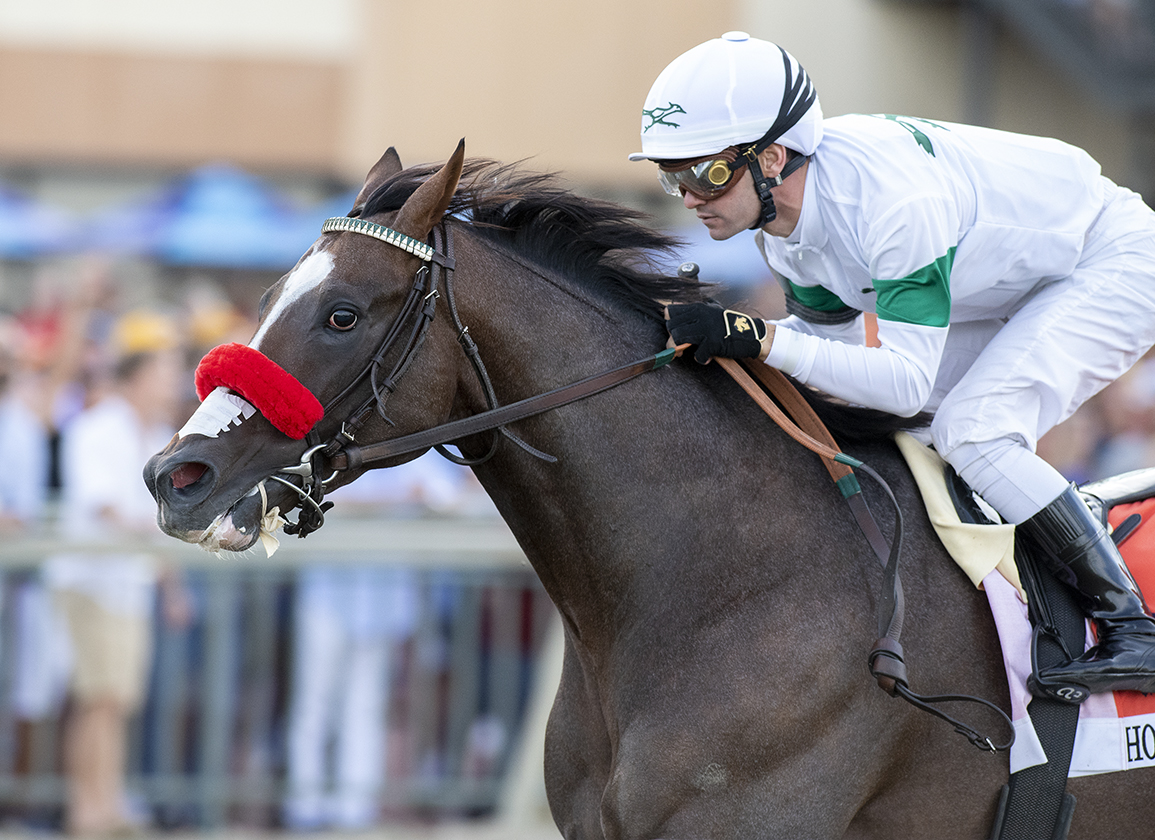 Hot Rod Charlie (Oxbow), among the most talented horses in training yet to have officially reached the highest level, got his Grade I in Saturday's Pennsylvania Derby–but not without some more drama. He had last been seen getting DQ'd from first to seventh in the GI Haskell Invitational S. at Monmouth July 17 when he crossed over on and clipped heels with Midnight Bourbon (Tiznow), causing that runner to drop Paco Lopez. And it was Midnight Bourbon who again was involved in a controversial stretch drive with Hot Rod Charlie.

Backed at 9-10 to atone for his Haskell transgressions, Hot Rod Charlie went right to the front with Midnight Bourbon locked on to his right flank through opening splits of :23.52 and :47.07. Hot Rod Charlie and Flavien Prat floated Midnight Bourbon very wide into the lane after six furlongs in 1:10.76, but they straightened up for the stretch drive and always seemed to be going better, crossing the wire 2 1/4 lengths to the good of Midnight Bourbon with Americanrevolution (Constitution) a non-threatening third.

The tote board flashed, and the tension mounted, but after some consideration the stewards made what appeared to most to be the right call and let the result stand.

“He broke well and we got ourselves to the lead,” said Prat. “He likes to be forwardly placed. When it was time to go, he kind of looked around… He kind of messed around and swapped leads. I am really happy for the whole team and the connections. I thought I was on the best horse. He was training absolutely perfect going into the race. I was under control for the whole race.”

Steve Asmussen, trainer of the runner-up, was less pleased with the result: “Flavien Prat almost drops Midnight Bourbon for the second time. My horse ran well. He survived.”

A fourth-out graduate going a mile at Santa Anita last October, Hot Rod Charlie was immediately thrown into the deep end after that, but he handled it just fine, running eventual champion Essential Quality (Tapit) to 3/4 of a length at 94-1 in the GI Breeders' Cup Juvenile. He defeated Midnight Bourbon by two lengths in the GII Louisiana Derby Mar. 20, and was a close third across the line in the GI Kenucky Derby May 1. Second to Essential Quality in the GI Belmont S. June 5 while earning a strong 108 Beyer Speed Figure, Hot Rod Charlie out-gamed current Derby runner-up Mandaloun (Into Mischief) in the Haskell stretch drive.

“Charlie is a rock star. I'm just a roadie but I am a pumped roadie, that's for sure,” said trainer Doug O'Neill, who was celebrating his first Pennsylvania Derby victory. “I could tell Charlie did not corner as well as he could. But it didn't seem like he affected [Midnight] Bourbon at all, thank God. He seemed like he was clear. Flavien had mentioned maybe putting a set of cheaters on him again. He said he got a little distracted being on the lead, kind of looking around and that might have caused him not to corner as well as he could have. This one did not seem as dramatic as the Monmouth race. For this to come on top of his last race, this was definitely exaggerated and had a long inquiry as well. Thank God he was clear and didn't cause any interference. I was pretty confident they were not going to take him down.”

O'Neill continued, “When you have speed and stamina and class, you can do some crazy, cool things. He displayed today that he has got some special qualities that, if he stays injury free, could lead to big stuff in November. I think he can be a big force in the Breeders' Cup. Obviously there are some big time horses out there that have more experience than him, but he is coming around at a good time.”

One of seven black-type winners–and the first at Grade I level–for his sire Oxbow, Hot Rod Charlie is the third Grade I winner produced by a daughter of Indian Charlie after his half-brother, 2019 Eclipse Champion Sprinter Mitole (Eskendereya), and GI Frizette S. winner Dayoutoftheoffice (Into Mischief).

The fifth foal, runner and winner out of the placed Indian Miss, Hot Rod Charlie is her second at the highest level after Mitole, who won the GI Breeders' Cup Sprint among four Grade I victories. She sold for $1.9 million to Larry Best's OXO Equine carrying to Into Mischief at the 2020 Keeneland November Sale. Indian Miss threw a filly by Into Mischief in 2019-also an OXO Equine purchase at $525,000 at last year's Keeneland September Sale–and a colt by that sire this term. A half-sister to GII Davona Dale S. heroine Live Lively (Medaglia d'Oro), she visited the court of Instagrand earlier this year.