Hot Rod Charlie on to Derby 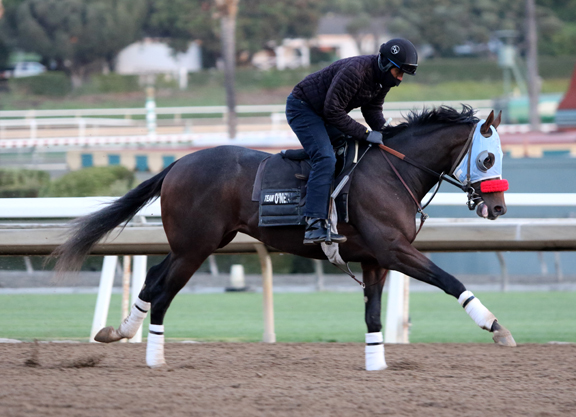 Hot Rod Charlie (Oxbow) exited his win in Saturday's GII Twinspires.com Louisiana Derby in fine shape and will ship back to trainer Doug O'Neill's California base Tuesday to prepare for the May 1 GI Kentucky Derby.

“Charlie looked great this morning,” O'Neill said. “He flies back to California on Tuesday. I love the spacing [six weeks] leading up to the Kentucky Derby. It's ideal. He's proven to travel well. I'm very proud of my nephew Patrick [with co-owner Boat Racing]. He's a real good young man and I'm very excited for him and all of the owners.”

Hot Rod Charlie was second as a 94-1 longshot in last year's GI Breeders' Cup Juvenile. He was beaten a neck when third behind Medina Spirit (Protonico) and Roman Centurian (Empire  Maker) in the Jan. 30 GIII Robert B. Lewis S. before his front-running victory Saturday at Fair Grounds.

“It was a big effort and he's another horse that's just going to continue to improve,” Scott Blasi, assistant to trainer Steve Asmussen said of the Winchell Thoroughbreds runner. “I don't think distance will be an issue with him and the timing back to the Derby off this series here, there will be plenty of time to freshen up and run his best race. We'll train here for a week and ship a week from Sunday [the 28th].”

Of O Besos (Orb)'s third-place effort Saturday, trainer Greg Foley said, “We all want to go forward after yesterday. The only question we had was the distance, and he answered that pretty good. He galloped out past the winner. We've got 25 [Derby qualifying] points. If we got second, we wouldn't have to think about it, but now we have to hope we get in. We just have to wait and see. I don't want to run him back [before the Derby]. I don't think it will affect our training. He's a dead-fit horse. We'll get him back home next week [to Churchill Downs] and we'll just wait and see. If it gets us in, great, if it doesn't, oh well, we'll go from there. I'd like to try and get in the big one and hopefully that will get it done. At least we're not wondering any more [about the distance].”

Favored Mandaloun (Into Mischief) was a lackluster sixth in the Louisiana Derby.

“We couldn't come up with any reasons for the dull performance,” trainer Brad Cox said of the beaten favorite. “We'll get him back to Kentucky, see how he trains, and then go from there. I've thought about it, but I think right now I'll probably nominate him to the [Apr. 10 GIII Stonestreet] Lexington [S. at Keeneland] and we'll see. He was done at the half-mile pole, so I don't think the distance was the reason. He ran out of horse fairly quickly. He handled everything in the paddock, so to show up and get beat by those horses we had run so well against, that was obviously disappointing.”

“She came out of it good, scoped good, looked good,” Cox said. “I was super happy with her. She's had two races and that was our plan all along, to come down here and run twice and have a horse who is the third race off the layoff [in the GI Kentucky Oaks].”

Travel Column has been exchanging blows with Clairiere (Curlin) all winter and that filly also heads into the Kentucky Oaks after her runner-up effort Saturday.

“I love Clairiere stretching out to a mile and an eighth,” Blasi said of the Asmussen trainee. “The pace yesterday was very moderate and it really didn't benefit her running style. I thought it was an A-effort considering everything and she should move forward a lot off of it. With her breeding and her running style, the distance at Churchill should really benefit her.”