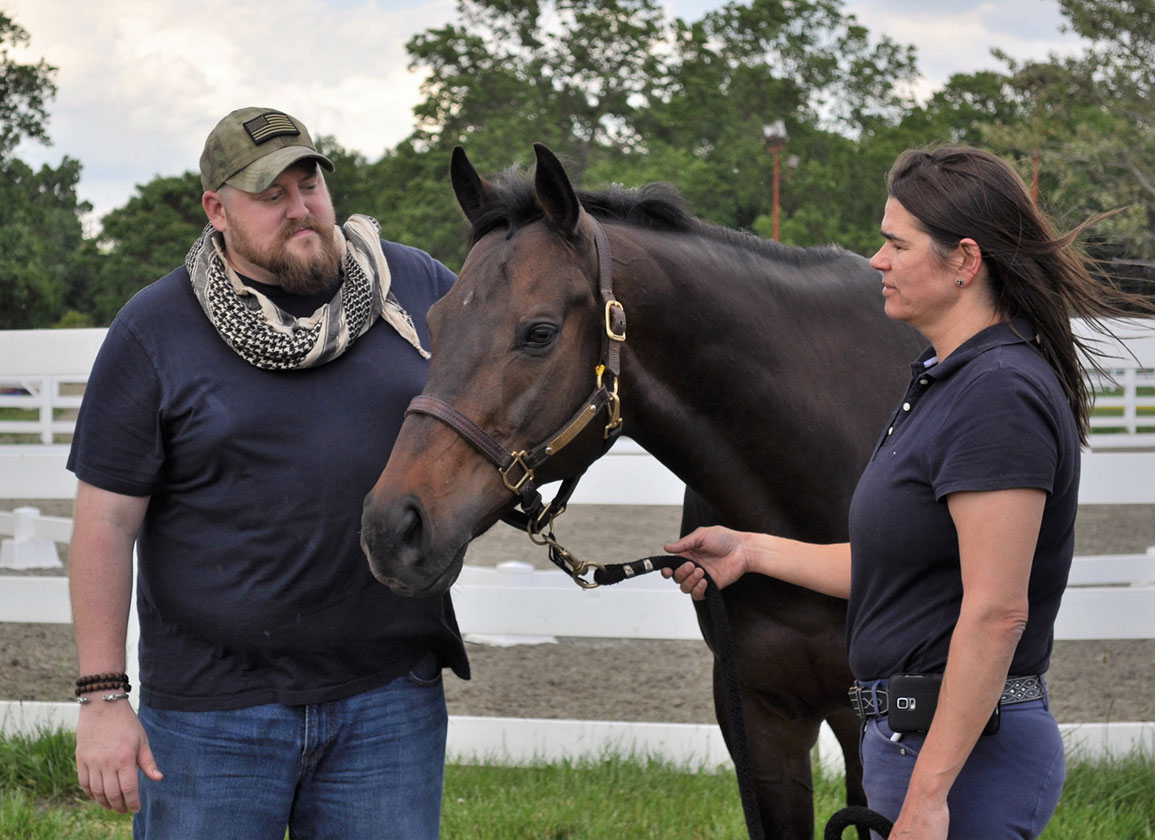 The goals of the Man O' War project, which is spearheaded by horse owner and philanthropist Earle Mack, may seem almost too big, too much to reasonably hope for. Not only does Mack want to make major progress when it comes to dealing with the epidemic that is veterans returning from combat with Post Traumatic Stress Disorder (PTSD), he wants to use horses as the mechanism to do so. And if the Man O' War project can prove unequivocally that equine assisted therapy (EAT) is a valuable tool for combating PTSD, there should be a great demand for horses to work with the veterans, including off-the-track Thoroughbreds. That has the potential to save the lives of hundreds of race horses who might otherwise be sent to slaughter.

“We are extremely optimistic at this time that an initiative like the Man O' War project will work,” Mack said. “Our hopes and prayers are with victims of PTSD who have served our country with gallantry. We owe them more respect and better treatment. And this will save the lives of lot of Thoroughbreds that ordinarily would be mistreated or slaughtered. We are hoping for a major breakthrough in both areas.”

It may not be too good to be true. Mack will tell you that, and his team is starting to compile data to prove just that. But he knew his word, his beliefs and a bunch of anecdotal information or data coming from small-time, poorly funded projects were not nearly enough to create what he wants–for EAT to not only become a widely accepted treatment for PTSD, but for it to be recognized as one of the most effective treatments there is. To do that, he needed to create the definitive study, and that is what the Man O'War project is.

Why do people believe that working with horses is an effective treatment for people suffering from a variety of mental disorders, PTSD among them? Because people tell us so. What has always been missing from the equation is science and data, science and data that will, hopefully, prove beyond all doubt that EAT is a very effective tool to fight PTSD and will create a best-practices manual for all others to follow. Once you have that, doors should start opening, to the Veteran's Administration, the Department of Defense and other agencies and groups that can put their resources to work to create nationwide EAT programs that have the potential to change the lives of thousands of veterans.

Mack sought out the foremost experts in the field, members of the Psychiatry Department at Columbia University Medical Center, including some of the most respected people in the area of PTSD study. The Man O' War project is led by Yuval Neria, Columbia's director of the Trauma and PTSD Program; and Dr. Prudence Fisher, a research scientist and a professor of clinical psychiatric social work.

Neria and Fisher are overseeing a study that includes several stages and is about halfway complete. Once a week, veterans diagnosed with PTSD come to the Bergen Equestrian Center in Leonia, New Jersey, and spend 90 minutes interacting with horses, grooming them, petting them, lifting their feet or simply trying to befriend them and gain their trust. No riding is involved. The sessions for each group last eight weeks and then a new group is brought in. The project will not conclude until 50 to 60 veterans have come through the program. After that, Neria and Fisher will publish their work, including comprehensive data.

Neria has been reluctant to speak about his initial findings, but Mack said Neria told himself and the Man O' War Board that the results so far have been “amazing.”

Fisher has already seen significant changes in many of the patients who have come through the program. One of the most notable examples was a patient that who could not go outside without assistance. By the end of his eight weeks that was no longer an issue.

“He could do things he could not do before,” Fisher said. “He could deal with crowds. He described a situation where he had a problem going out of his house and always had to have someone go with him and now he doesn't. He gave an example, that he was able to go into Penn Station by himself, and that's a place that is really crowded. It was a really big change and he felt empowered. He said generally his anxiety level when outside was about an 8 on a 10-point scale and now it is a 0 to a 2. He was having problems sleeping and now he is sleeping fine.

“He's not waking up in middle of the night and he stopped having nightmares.”

According to the Veteran's Administration, 11 to 20 out of every 100 returning veterans from the wars in Iraq and Afghanistan suffer from PTSD. It also estimates that 30% of Vietnam veterans have had PTSD in their lifetimes. There are four types of PTSD symptoms listed by the VA. They are: reliving the traumatic event; avoiding situations that remind you of the event; negative changes in beliefs and feelings; feeling keyed up. Estimates are that between 5,000 and 8,000 veterans a year commit suicide due to PTSD.

“I have lost friends to suicide as a result of their traumatic experiences and not being able to reintegrate back into society,” said Marine Corps veteran Matthew Ryba, who served in both Afghanistan and Iraq. “I can't even tell you how many guys I know who suffer from PTSD. I have very positive expectations for the Man O'War program.”

Ryba grew so committed to helping his fellow vets that he went back to school after his tours were over and received a Bachelor's degree in psychology at Fordham University. He is currently the project administrator for Columbia's Lighthouse Project, which deals with suicide prevention and PTSD in veterans, and also a part of the Man O'War team.

Mack is himself an Army veteran, though he never saw active duty. He had a prior experience dealing with behavioral and emotional issues when he was the Chairman of the New York Council on the Arts and initiated a program that brought music and art studies to inner city schools in New York and Buffalo.

He said he was amazed by the progress under-achieving or at-risk students achieved in all areas when introduced to the arts. Mastering an instrument or creating a painting helped give them the confidence they had been lacking. That led him to believe that unconventional treatments could also help PTSD veterans and he was already well aware of the work people had been doing with horses to help those with other afflictions, like autism, and the work small organizations had already been doing with PTSD suffering veterans.

But he understood that the missing link was the type of credible study that could provide the science and data necessary to take EAT-PTSD programs to the next level. He reached out to a friend who worked in the childhood psychology department at Columbia and that led to the formation of the Man O'War project. The Earle Mack Foundation has donated $1.2 million to get the program off the ground.

The project was a perfect fit for Mack, who is deeply concerned about the problems of PTSD among veterans and has had a life-long love affair with horses. It can be hard to explain why, but there's little doubt that interacting with horses can change someone's very soul.

“Horses are somewhat social because they are herd animals; they like to be around something else,” Fisher said. “They are reactive, they are hyper-vigilant. They react and because they are big you notice their reaction. It's sort of a sensual thing, how they smell, their size. If you're around cows you don't get the same reaction. With horses, it's almost magical in certain ways.”

More traditional treatments for PTSD include medications, cognitive therapy and something called exposure therapy, where the patient is asked to relive the trauma and focus on it. Fisher says that while many are effective, there is a need for more options.

“No treatment works for everybody,” she said. “One of the treatments that is most frequently used is exposure therapy, where they focus very much on the trauma. That's really a hard therapy for people and a lot of people drop out because they can't do it. It's hard for a lot of people to tolerate, so there is room and a need for other things.”

The team at the Thoroughbred Aftercare Alliance is paying close attention to the Man O'War project and has great hopes for what it can do for retired race horses. Though virtually any breed can be used in such a therapy program, Thoroughbreds are part of the Man O'War project and have traditionally done well with EAT programs. TAA Operations Consultant Stacie Clark Rogers is like Mack in that she's not afraid to think big. If the use of treatment for veterans suffering from PTSD catches on and spreads, that could provide ample opportunities for racetrack retirees.

“I am a big believer in the use of Thoroughbreds in equine assisted therapy programs,” she said. “I have seen it work in a lot of places. It excites me to find new lives for these horses outside of the traditional, showing and eventing, and those other occupations we've found for Thoroughbreds in the past. The Thoroughbred has a sensitivity that no other breed has. It has had to put up with a lot of stuff from us in racing. It is a willing partner. We believe at the TAA that therapy programs are important. It's not a new concept. The Thoroughbred Retirement Foundation has been using its prisoner program for therapy and that has the lowest recidivism rate of any prison program there is. So it's not surprising that we've seen it work with autistic kids,  and now this new, much-needed study with Earle Mack's Man O'War project.

Postscript: Though Mack has donated $1.2 million to the Man O'War project, more money is needed to bring the study across the finish line. To learn more or to contribute, you can reach out to Anne Poulson at 202-285-1172 or [email protected]… Fisher, Neria and Mack will take part in a seminar during the Equestricon conference in Saratoga on Aug. 14. They will be part of a seminar entitle “Aftercare Pathways.”