Horse Saved at Fort Erie After Falling Into Sinkhole 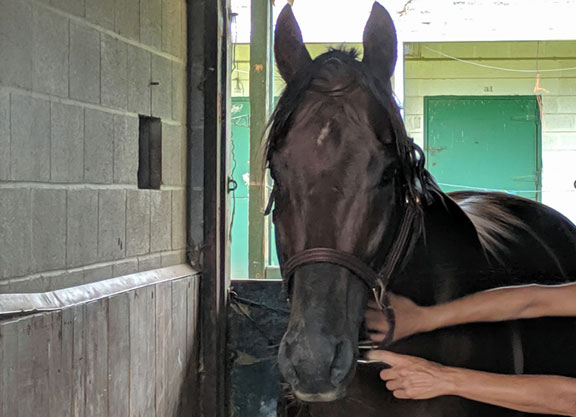 Mr. Changue back in his stall after his rescue | Fort Erie Racetrack

A 6-year-old horse at Fort Erie Racetrack was saved during a dramatic rescue Thursday morning after falling into a sinkhole on the backstretch caused by a broken water main.

Mr. Changue (Gottcha Gold), trained by Ken Albu for Tom Passero, was grazing when the ground gave way. The incident did not happen close to the actual track.

Along with the help of horse people and the Fort Erie Fire Department, the horse was rescued safely and unharmed. Tom Valiquette, chief operating and financial officer of the track, which is owned and operated by Fort Erie Live Racing Consortium, said key members of the racetrack’s maintenance, security and racing office staff have been trained to manage these types of situations through programs such as the Large Animal Emergency Rescue Training.

“The safety of our horses is always a priority,” Valiquette said. said. “We would like to thank our horse people, staff, and local fire department for assisting with the safe rescue.”

Trainer Ken Albu said that he was thankful to all the people who pitched in to help.

“It could have terrible if not for everyone coming together and the horse being such a professional,” Albu wrote on Facebook.

“There was no way of knowing this situation (would happen), but let me tell you the horse is good.”

He praised the horsemen who helped, along with Fort Erie’s management and the Fort Erie Fire Department.

“As scary as this was, Fort Erie management from top to bottom came together and fixed the problem immediately,” he said. “They went above and beyond to fix the problem and I personally thank them.”

One of the horsemen involved, Kim McIssac Landsborough, called it a miracle that neither the horse nor the humans who saved it were not hurt.

“I took hold of (the horse) right away. It happened in seconds,” she said. “If one of us had gone in (the sinkhole) it would have been bad, but by the grace of God no one got hurt.”

Fort Erie is the site of the $400,000 Prince Of Wales Stakes, the second leg of the Ontario Lottery and Gaming Corporation Canadian Triple Crown and runs on July 23.

The track just announced a 5% increase in purse scale for the remainder of the 2019 season. It also announced a 20% increase for all of the races on the Prince Of Wales card.

This year the Canadian Triple Crown has a $500,000 bonus if a horse wins all three races, which includes the Breeders’ S. Aug. 17.

One Bad Boy (Twirling Candy), trained by Richard Baltas for owners Savjay Racing LLC, Greg Hall and Brooke Hubbard, won the Queen’s Plate, the opening leg of the Canadian Triple Crown, and is being pointed to the Prince Of Wales.