Horse of the Year Knicks Go Settling in at Stud 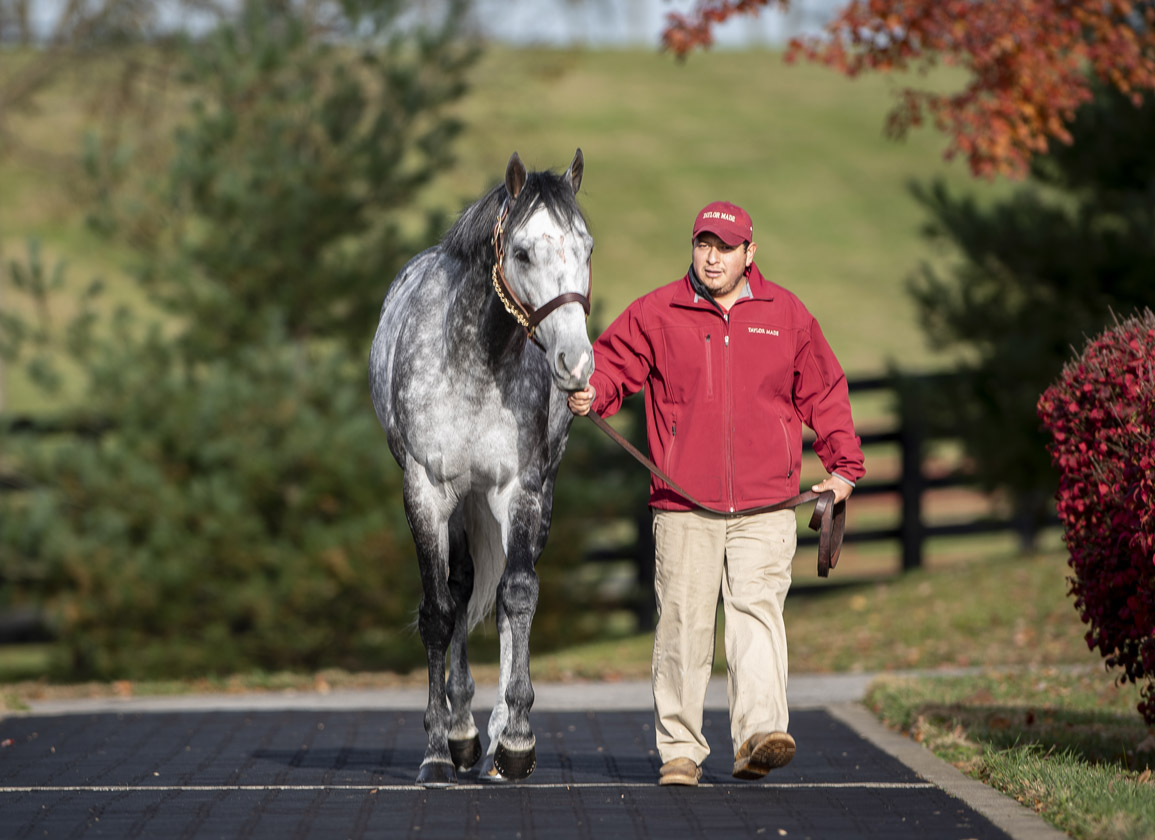 Two-time Breeders' Cup Champion and newly-crowned 2021 Horse of the Year Knicks Go is already well underway in his first year at stud at Taylor Made Stallions. It's been a whirlwind stretch for the five-time grade I winner over the past few weeks after his final career start in the GI Pegasus World Cup Invitational S. as he traveled from Florida to Kentucky and had just a few days to prepare for the upcoming breeding season before the shed doors officially opened.

“He ran in the Pegasus on Jan. 29, shipped on the 30th and started test breeding the next day,” Taylor Made's Brooks Taylor shared. “He bred his first mare on the eighth this month and has already bred 10 mares. He's taken to his job really well. He really didn't have any time off.”

Such a quick turnaround might bring about some apprehension for those overseeing a young stallion's career, but Taylor said most horses take it all in stride.

“There is a lot riding on it, but I think they can handle it as long as you treat them right and make it as easy as possible for them. You make sure to give them enough time outside and things like that.”

For now, Knicks Go's first book includes close to 160 mares, but Taylor said that number may increase as the season continues.

He added that the Taylor Made team is thrilled with how their new sire's first book is shaping up and explained how as they were searching for mares for him, their two main focuses were physical and race record.

“Physical is important to us,” he said. “We realize that in that first year, how they sell is really important. We want to breed the best physical that fits him. For me personally, I like Tiznow mares with him and he has about 10 Tiznow mares. We also wanted horses with a race record behind them and horses that could prove they could run. We didn't want a lot of unraced mares. It's really about trying to balance the physical with all these other different factors.”

Taylor, the son of the President of Taylor Made Stallions Ben Taylor, started his career in the industry by working on the farm at Taylor Made and spending summers gaining hands-on experience abroad in France, Argentina, Brazil and Australia. He spent several breeding seasons working with the Taylor Made stallions before moving into the office to work as a stallion sales assistant for eight years. Now 35, Taylor serves as a Thoroughbred advisor, helping clients reach their breeding and racing goals.

He also played a major role in landing Knicks Go onto the Taylor Made stud roster.

Taylor remembers first laying eyes on the colt when the talented gray was just a 2-year-old at Keeneland.

“I've known [Korean Racing Authority racing manager] Jun Park for a long time through selling seasons with him and seeing him at the sales,” he explained. “I had watched the Sanford and thought it was cool that the KRA was winning here in the U.S. I was at Keeneland for the GI Claiborne Breeders' Futurity and remember looking at Knicks Go in the paddock and thinking, 'Man he's a pretty horse.' He ended up winning really impressively and I just remember being so happy for Jun and the KRA to see them have that success.”

“I had asked Jun what their plans were and he said they wanted to stand him in the U.S.,” Taylor recalled. “I told him when the time comes, we would like to have that conversation. We wanted to see how it played out. Once it looked like he was going back to the Breeders' Cup last year, we made our pitch.”

Taylor Made was of course not the only stud farm hoping to add Knicks Go to their roster.

“They told us what they wanted and we told them what we could do and we met in the middle on everything,” Taylor said. “We just got lucky I guess, but we were always ecstatic about the horse. I also talked a lot with Jun about Not This Time and I told him that the one thing we did right with him is we went after horses with 2-year-old form. I think our discussion about how important race record is and talking about how we did things with Not This Time is really what drew them to us.”

Knicks Go's accolades from the racetrack also include 2021 Longines World's Best Racehorse and along with his Horse of the Year title, he was also named champion older dirt male. The accomplished six-year-old retired with career earnings of over $9.2 million.

“It's pretty cool to have a racehorse of this caliber,” Taylor said. “It doesn't happen often. We're very blessed to have him and we got really lucky. It's one of those things where you're so excited but you don't want to go start shouting about it or anything, you just want to work hard so that they succeed, and then you can celebrate.”