Horse Country Gears Up With BC Tours 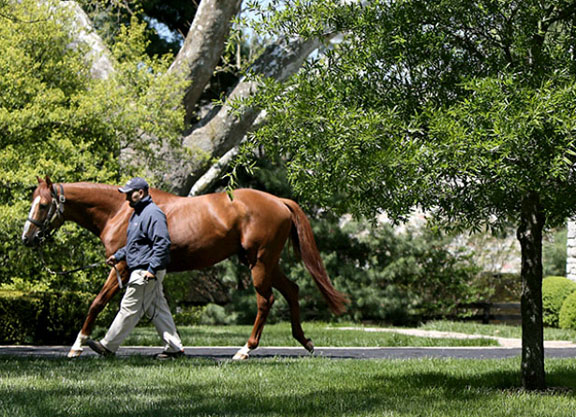 In January, Horse Country Inc. was launched to promote and facilitate tours of Lexington's horse farms, medical clinics and equine attractions. This fall, the upstart non-profit will play a central role entertaining fans when the Breeders' Cup World Championships is held at Keeneland Oct. 30-31, and while organizers recognize the challenges, they're excited to showcase what Kentucky's Bluegrass region has to offer.

“The Breeders' Cup is a huge deal to us, but maybe not as known to the general consumer,” said Mill Ridge Farm's Price Bell, who along with his father Headley Bell joined with Brutus Clay and Dr. Luke Fallon to help spearhead the formation of Horse Country. “We want to draw people to Lexington early and make a kind of fanzone here.”

As part of Breeders' Cup Festival Week, Horse Country has put together ticketed tours available to the general public. Each tour, lasting about four hours, features two fan experiences. There are 27 tours in total, with about 2,500 tickets on offer. The goal is simple: fan development.

“We want to share with fans and the community the story behind the Breeders' Cup,” said Bell. “We have all these farms and all these experiences, so let's try to bundle them. Look at the horses competing in the Breeders' Cup. Many of their mothers are here. Most of their fathers are here. They were treated at clinics here, and many are fed by local feedmills. Having a horse in the Breeders' Cup is what most of us get up every day and strive for. It's our passion. We hope that sharing that passion is part of the fan-development puzzle.”

Tours begin at a designated area at the newly renovated Red Mile near downtown. After guests register and hop on a bus, they are off to the first destination. Volunteers will act as guides, and some buses will have “betologists” to teach handicapping skills and offer tips.

The tours are named after Breeders' Cup horses, past and present, who are associated with the farms the guests are visiting. The Unbridled's Song tour, for instance, features a trip to Taylor Made Farm, where the late 1995 GI Breeders' Cup Juvenile hero stood, and where Triple Crown hero American Pharoah, the current GI Breeders' Cup Classic favorite, spent time as a yearling. Following a guided tour of Taylor Made, guests will be shuttled to Keene Ridge Farm, home to the good producer Belva, dam of the 2007 GI Breeders' Cup Turf winner English Channel.

Price believes this behind-the-scenes access will not only help create fans, but to lead to a more dedicated fan base.

“We as breeders always think that racetracks should create the fans,” he said. “But really, it's an impossible task–-to tell someone why horses run, to get them into a seat comfortably, to teach them how to bet, all these things we ask the tracks to do, all in a 30-minute timeframe before the next race. What we can do, as breeders, farms, clinics and feedmills, is to tell that story in a very managed way.”

The location of the 2015 Breeders' Cup gives Horse Country and its partners a unique opportunity, said Bell, who went on to describe what visitors can expect.

“Zenyatta is associated with Donnie Robinson and Winter Quarter,” he said. “So if you take the Zenyatta tour, you'll go to Winter Quarter, you'll talk to Donnie, and learn the story of Zenyatta. What it meant to the farm..what she was like as a foal…where she was foaled. And what the Breeders' Cup means to Donnie. And that's the question we're trying to answer with every tour.”

Bell said that, ideally, guests will get a chance to visit a horse associated with a 2015 Breeders' Cup runner.

“At Mill Ridge, we raised Coffee Clique, who hopefully will race in the Filly & Mare Turf,” he said. “If she's entered for the race, you'll meet Miss Chapin, who's her dam, and you'll take pictures with her. And you'll learn about John and Jerry Amerman, and how they bred Miss Chapin and then bred Coffee Clique. You'll learn what it means to Mill Ridge to have raised a Breeders' Cup horse. If you take the Lady Eli, you go to Runnymede, and you meet [Lady Eli's dam] Sacre Coeur. You meet the Clay family, and realize that across three generations of humans, they've raised six generations of this family, and how they realized the ultimate when Lady Eli won the GI Breeders' Cup Juvenile Fillies Turf last year. Then you hop on the bus and head over to Claiborne Farm, and you learn all about Blame, and what Blame's Breeders' Cup win meant to the Hancock family. That's one thing we want to impart on the tours, just how big a deal the Breeders' Cup is to us.”

It may seem strange to some that farms whose primary income derives from the sale of horses and/or stallion seasons would come together to support Horse Country. After all, it's unlikely that tourists who visit the farms during the Breeders' Cup will then stay around for the November sales and purchase a mare or weanling. But that's not really the point, said Bell.

“Do I think they're going to go over to the sales and buy a horse? No,” he said. “But from a long-term perspective, they're never going to become owners if they don't become fans first.”

Bell also admits there's a PR component to it.

“People might say, 'Oh, the racing industry doesn't take care of their horses,'” he said. “But on these tours, they're able go to a veterinary clinic and see firsthand the facilities and the care the horses do get. We have amazing retirement and aftercare facilities, too, and it's a great opportunity for us to show all that we do do for horses. And that changes the conversation. If something bad happens–and inevitably it does–we can show that it's the exception, not the rule. The people who have taken these tours become your advocates.”

Heading up Horse Country is the organization's bright, energetic executive director Anne Sabatino Hardy, who was hired in January to help get Horse Country off the ground. Though she's a longtime resident of Lexington, Hardy wasn't a horse racing insider. A graduate of Asbury University, she worked with Associations International, an association management company based in Lexington. She also worked at the PR firm Preston-Osborne, and was the editor-in-chief of the Chevy Chaser and Southsider Magazines, two local magazines.

In many ways, Hardy was the ideal choice to lead Horse Country. She does, after all, represent what many consider to be racing's target audience—the young, professional, dedicated sports fan.

“That's a perspective I bring to it,” said Hardy, an avid Indianapolis Colts fan. “I love when I can be educated enough and brought along enough in a sport that I can really engage with it. And that's something I really struggled with horse racing when I went out to the races. I lived here for 15 years before I was hired into this job and visited a horse farm for the first time. And I look at the farms we have here, and the clinics, and I think, 'Man, if we can just give people a pathway to engage with this sport.' It's a thrilling sport to be part of, but we have to get the ball rolling to get potential fans to that point.”

The good news, said Hardy, is that the casual race fan, the one who tunes into the Kentucky and maybe the Preakness and Belmont, is eager to learn more.

“Churchill Downs did a survey after the Derby this year about what resonated with fans,” she said. “One of the things they shared with us is that the majority of people who watched the Derby coverage didn't do so for the celebrity coverage or any of the other things they promote. They were watching because they wanted to learn more about the horse, and more about the competitors.”

Added Bell, “Churchill said that the number one factor driving the people who watched was interest in the horse–35%. Number two was the history of the event at 12%. And number three, at 11%, was the celebrity content. So three times more people tuned into the Derby because they were more interested in the animal than the celebrities.”

Interest in the Breeders' Cup horse farm tours has been solid. Horse Country grouped together those people who had inquired to individual horse farms about tours, and offered them an initial crack at tickets. From roughly 650 email addresses, about 200 tickets have already been sold.

Hardy said she was encouraged by the initial demographics.

“From the first 100 buyers, there were people from 23 states and two countries,” she said. “Only 18% of the purchasers were in Kentucky, which I was so excited about. And we've barely started to promote it yet.”

Hardy added that while the majority of tour participants figure to be out-of-town visitors, she's expecting plenty of local involvement, too.

“The tours run from Sunday, Oct. 25th through Wednesday, Oct. 28th, so there's a window there—maybe from Sunday afternoon through Monday morning—that it's much more likely to be locals,” Hardy said. “And we're excited about that opportunity to reach into the local community and start to share what their neighbors are doing, and to get them tied in and excited about it.”

“When people are able see the horses and touch the horses…this is an easy sell,” said Headley Bell. “Lexington can be a destination city without any trouble. It's very exciting. The number-one request from VisitLex is to get onto a horse farm. Before, there was never such a coordinated and broad way to do so. Now, we're providing a platform, and there's no telling where it can go. Before, if you were a tourist visiting Lexington, it was like window shopping. Now, as an industry, we're embracing and welcoming fans to be part of this.”

And that, said Hardy, gives Horse Country a big chance to be successful.

“The fact that it was the farms and clinics that came up with this idea, and that they came together and continue to drive this idea, that is what will make it work ultimately,” she said. “It's their assets that they've identified as something they want to share. Everyone's been so unified under this big idea. It's incredible, and it's kept everyone so enthusiastic. And that's what will make it special for the visitors.”