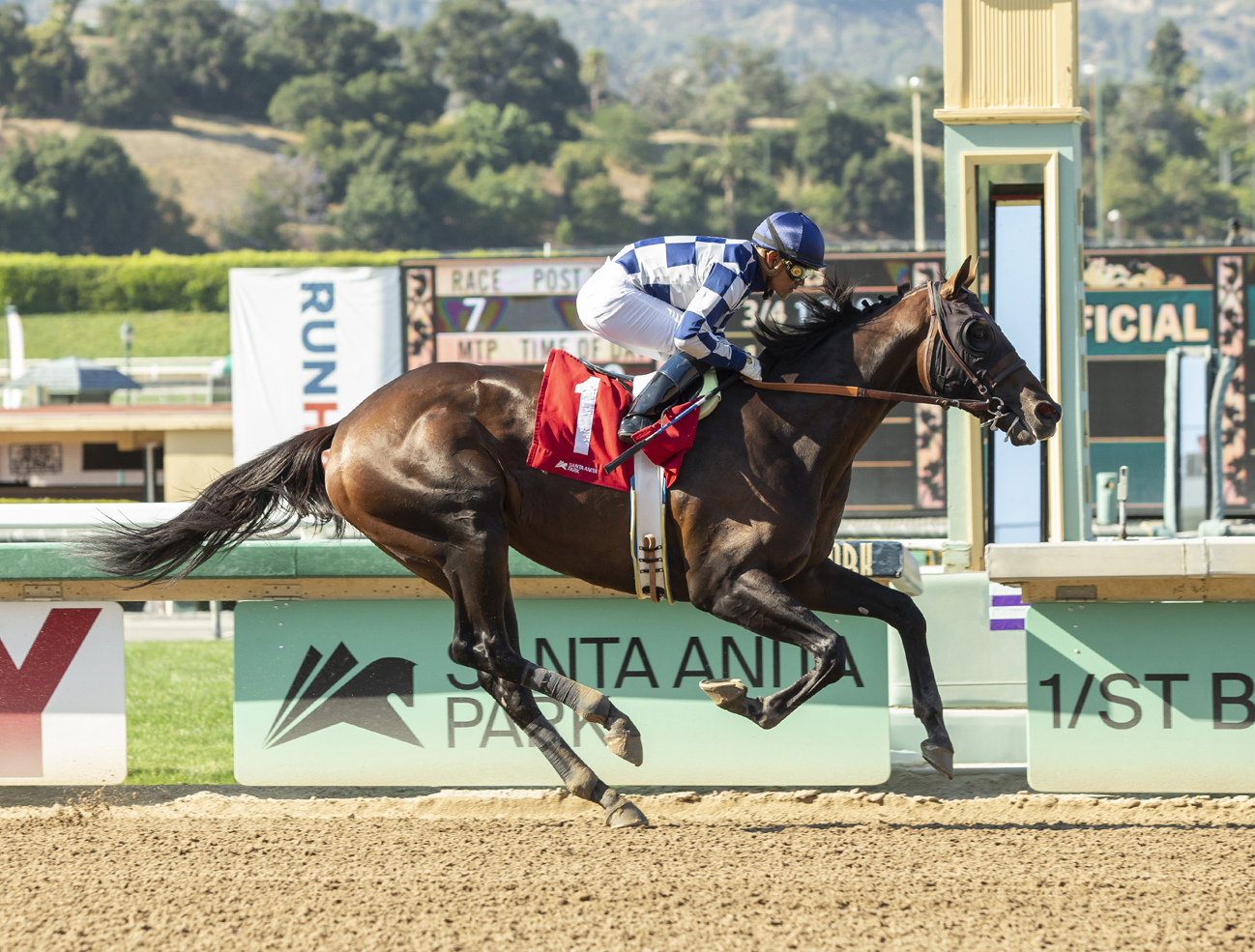 While the 3-year-old picture was focused primarily in New York Saturday with the GI Belmont S. and the GI Woody Stephens S., Hopper (Declaration of War) threw his hat into the ring from the other coast with a facile victory in the GIII Affirmed S. at Santa Anita. It was a short field, but the exacta horses both hailed from the Sean McCarthy barn while the trifecta was filled out by three former Bob Baffert pupils.

When the stall doors flew, Hopper immediately hightailed it the front from the one post. He stayed on the inside, moving easily and getting the first quarter in :23.37. 'TDN Rising Star' and GSP Doppelganger (Into Mischief) drafted in second, just off his flank and to the outside as Hopper threw down a half in :46.74, still moving smoothly. Abel Cedillo roused him in the stretch, leaving Doppelganger far behind, and the dark bay drew clear to win by 5 1/4 lengths while stablemate High Connection (Connect) passed Doppelganger late. Hopper gave the impression of being out for a morning breeze, making it look easy as he dominated the field.

“I saw Juan [Hernandez] asking [High Connection] at about the three-and-a-half to get into contention and Doppelganger was moving at the same time, but Hopper was just cruising on the front end, so I had a pretty good feeling,” said McCarthy.

Owned by Lanni Bloodstock, Madaket Stables, and SF Racing, Hopper debuted for Baffert Feb. 25 in a six-furlong maiden special weight over this surface, getting bumped at the start and again just after the three-eighths pole. He didn't reappear again until May 7 after that troubled beginning, and by then he'd been transferred to the McCarthy barn. Going seven furlongs that day, he went wide to win by 2 1/4 lengths and register an 87 Beyer. The Affirmed was only his third career start. McCarthy has indicated both Hopper and the runner-up will return to Baffert when the Hall of Famer returns from his suspension next month.

Pedigree Notes:
War Front's European champion and MG1SW Declaration of War is the sire of Hopper and 32 other Northern Hemisphere-bred black-type winners. Among his 17 graded winners are Canadian champion Mr. Hustle, GI Breeders' Cup Juvenile winner Fire At Will, GISW Decorated Invader, French G1SW Olmedo (Fr), and MGISW Gufo, who was also third in the GI Manhattan S. Saturday. Declaration of War stood at Coolmore in Ireland, America, and Australia before moving to Shizunai Stallion Station in Japan ahead of the 2019 season.

Hopper is out of Irridescence (SAf), a champion and MG1SW in her native country. She traveled all over the world for major races, winning Hong Kong's G1 Audemars Piguet Queen Elizabeth II Cup, and placing in the GI Beverly D. S. in the U.S., the G1 Falmouth S. in England, and the G2 Haafhd Jebel Hatta in Dubai. Hopper is her first stakes winner. She did not produce foals in 2020 or 2021 after being bred to Noble Mission (GB) both times, and was last bred to Air Force Blue. Her sire, the Nureyev stallion Caesour, has 16 stakes winners out of his daughters, including the 2020 GI Jaipur S. winner Oleksandra (Aus) (Animal Kingdom), a mare who beat the boys more than once.