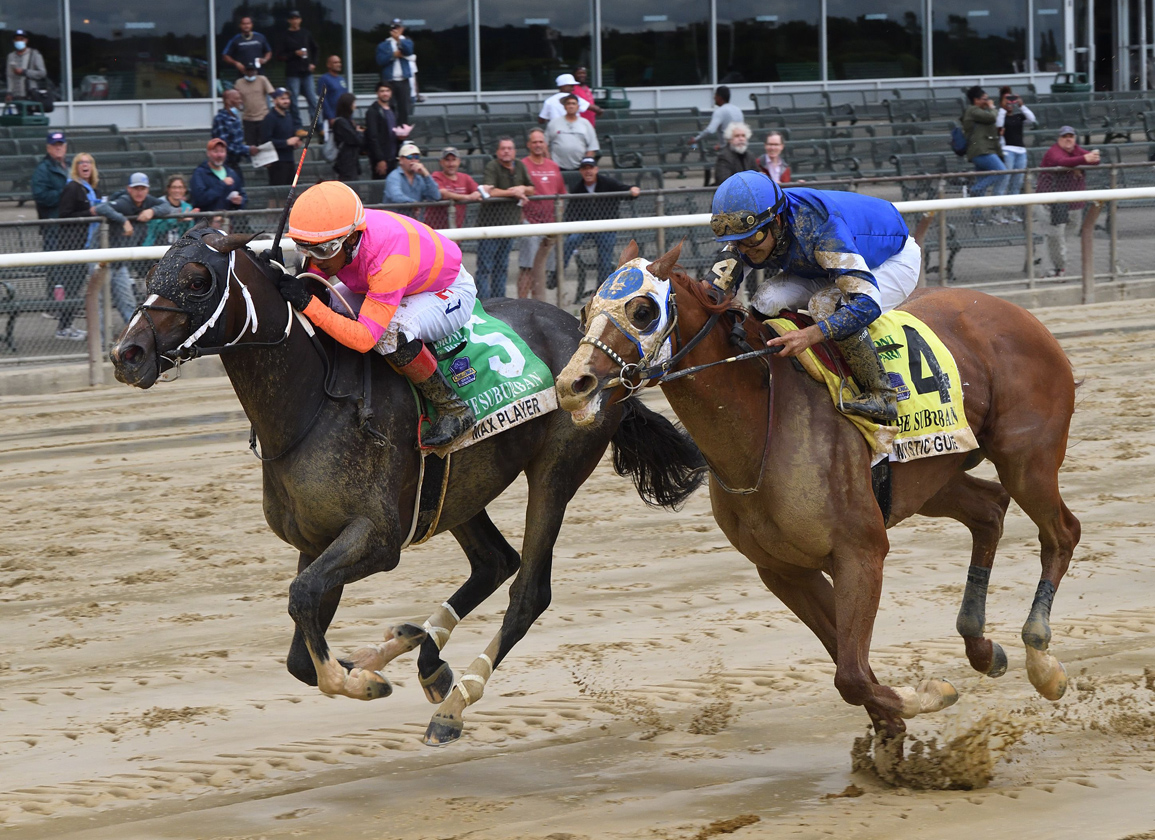 The betting public had Saturday's GII Suburban S. down to a battle between a pair of 'TDN Rising Stars': in one corner, Mystic Guide (Ghostzapper), whose victory in the G1 Dubai World Cup made him favored at 85 cents on the dollar, and in the other, Happy Saver (Super Saver), who got the better of Mystic Guide when first they eyeballed one another in last year's GI Jockey Club Gold Cup and the clear second choice at 8-5. Max Player (Honor Code) had yet to beat a horse of the quality of either of those and was duly sent off a distant fourth choice at what some would deem underlaid odds of 11-1. He was clearly overmatched on paper, but as the old saying goes, they don't run races on paper, and the persevering 4-year-old outslugged the odds-on choice to cause the upset in the 'Win and You're In' qualifier for this year's GI Breeders' Cup Classic. Happy Saver was no real menace in third.

Drawn five of six, with Mystic Guide to his inside and Happy Saver to his outer, Max Player wasn't the quickest out of the stalls but was soon clicked up by Ricardo Santana, Jr. and improved to be the pace-chaser as Moretti (Medaglia d'Oro)–a stakes winner at 11 and 14 furlongs–called the shots up front. Santana was content to lie second and wait for Moretti to play his hand, but Mystic Guide–perhaps a touch eager in his first start in 98 days–tugged for his head beneath Luis Saez, and Happy Saver was committed to an overland journey by Irad Ortiz, Jr.

Racing one off the fence, Moretti took the Suburban field into the final four furlongs, but Saez immediately seized upon the opening at the inside and allowed Mystic Guide to advance into what appeared to be a pretty tight spot, causing him a moment's hesitation that may have briefly stopped any momentum he'd built up. Max Player kept pace three wide, but Mystic Guide looked to be doing the better work has he struck to the front right at the quarter pole. Shaken up at the three-sixteenths, Mystic Guide looked to have the race at his mercy, but he was tardy in switching his leads, drifted to his right despite right-handed urging and could not resist the persistent rally of Max Player in the run to the wire. Happy Saver, four wide off the home corner, stayed on at one pace while never a danger to the top two and just lasted for third over Moretti.

“He was training really well,” said the winning jockey. “He always runs well on this track. He always tries hard. Today, he broke well and put me right there. I took the spot and no one wanted to go. As soon as he felt [Mystic Guide] inside, he kept on fighting until the end.”

Mike Stidham, trainer of the beaten favorite, was not unduly dismayed, and said: “It's not that surprising that a horse coming off three months might get tired off this kind of a racetrack. Certainly no disgrace in defeat. He ran hard and ran well. We're going onward and rolling toward the Breeders' Cup. We'll see how he comes out of it and then start talking about what's next.”

Winner of the GIII Withers S. while under the care of Linda Rice last February, Max Player was caught up in the uncertainty surrounding the numerous COVID-19 cancellations and ended up–less than ideally–racing first off a 4 1/2-month absence in the GI Belmont S. in June. A creditable third to Tiz the Law (Constitution), he repeated the effort in the GI Runhappy Travers S. in early August, but when Rice expressed some doubt about a possible run in the Sept. 5 GI Kentucky Derby, was moved to the Steve Asmussen barn. Fifth in the Run for the Roses and again in the GI Preakness S. a month later, Max Player had been soundly defeated in his two starts this term–an 11th-place effort in the Saudi Cup in February and a distant sixth in the GIII Pimlico Special S. when last seen May 15.

Kelly Breen signed the ticket on Fools In Love, going to $80,000 on behalf of K&G Stables at the 2007 Fasig-Tipton Midlantic yearling sale. A debut winner and multiple stakes placed at two, Fools In Love won her only black-type race in the 2009 Orleans S. at Delta Downs a few races before Hall's Truth and Justice (Yes It's True) was unfortunately pulled up when favored in the GIII Delta Princess S.

Fools In Love has gone on to be an integral part of Hall's broodmare operation and has bred five winners from five to race, including GSW & G1SP Seahenge (Scat Daddy), GSP Urban Bourbon (City Zip) and SP Frank's Folly (Mineshaft) prior to Max Player. The half-sister to MGSW International Star (Fusaichi Pegasus) was sold to Cheveley Park Stud for an even $1 million (offered not pregnant to Speightstown) at Keeneland November in 2017. Her first foal for that operation, the 2-year-old colt Homeric (GB) (Ulysses {Ire}), fetched €175,000 from Jamie Railton Sales Agency as a foal at Goffs in 2019 and she has since produced a filly by Frankel (GB) and another Ulysses colt.