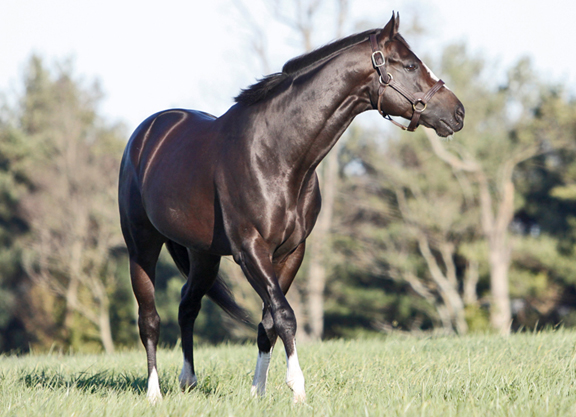 Sent off the narrow second choice at odds of 23-10 to improve off a courageous fourth on course-and-trip debut Dec. 15, the registered black filly landed in midfield and about 10 lengths off the pace set by Bateau du Ciel (Jpn) (Lord Kanaloa {Jpn}). The latter took the field into the lane and Queen's V V looked to have it all to do to bridge a six-length deficit entering the final 300 meters, but she stayed on determinedly and nabbed the front-runner as the wire loomed.

Queen's V V, her sire's lone starter in Japan to date, is a daughter of V V Goodnight (Midnight Lute), runner-up in the 2014 GIII Pucker Up S. while under the care of Tom Proctor, and sold carrying this filly in utero for $360,000 from James Keogh's Grovendale consignment at the 2016 Keeneland November Sale. V V Goodnight is a half-sister to Grade III-winning turfer Gleam of Hope (City Zip) and the stakes-winning Forest Princess (Hansel).

Carrying the A.P. Indy cross over Quiet American responsible for the likes of champion Bernardini, Queen's V V is a half-sister to a 2-year-old filly by Screen Hero (Jpn)–sire of 2015 Japanese Horse of the Year Maurice (Jpn)–and a yearling colt by Yoshida (Jpn)'s sire Heart's Cry (Jpn). V V Goodnight was bred to the latter last season.