Honor A.P. Faces Off With Baffert Duo in Shared Belief 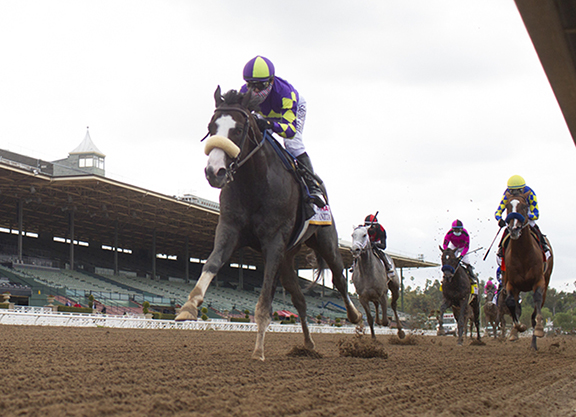 Honor A.P. (Honor Code) looks to add more GI Kentucky Derby points to his collection in Saturday's Shared Belief S. at Del Mar. An impressive second-out graduate when extending from six panels to a mile at Santa Anita in October, the $850,000 FTSAUG buy was runner-up to recent GI Haskell Invitational S. victor Authentic (Into Mischief) in the GII San Felipe S. Mar. 7. The dark bay turned the tables on that rival last time with a decisive score in the GI Santa Anita Derby June 6.

Bob Baffert had three set for this test, but undefeated 'TDN Rising Star' and GIII Los Alamitos Derby winner Uncle Chuck (Uncle Mo) has been re-routed to the GI Runhappy Travers S. Aug. 8 instead. That leaves Thousand Words (Pioneerof the Nile) and Cezanne (Curlin) to represent the Hall of Famer. Opening his account with a trio of wins, including the GII Los Alamitos Futurity and GIII Robert B. Lewis S., Thousand Words was fourth in the San Felipe and faded to 11th in the Oaklawn S. Apr. 11. Given a brief freshening, the $1-million KEESEP buy ran second to his stablemate in the Los Al Derby last time.

Also a defecting from the field is Santa Anita Derby fourth-place finisher Anneau d'Or (Medaglia d'Oro), who will instead contest the Aug. 9 Ellis Park Derby. Kiss Today Goodbye (Cairo Prince) rounds out the now four-horse field. Breaking his maiden at fifth asking at Santa Anita Feb. 22, he was 10th last time in an optional claimer there May 17.