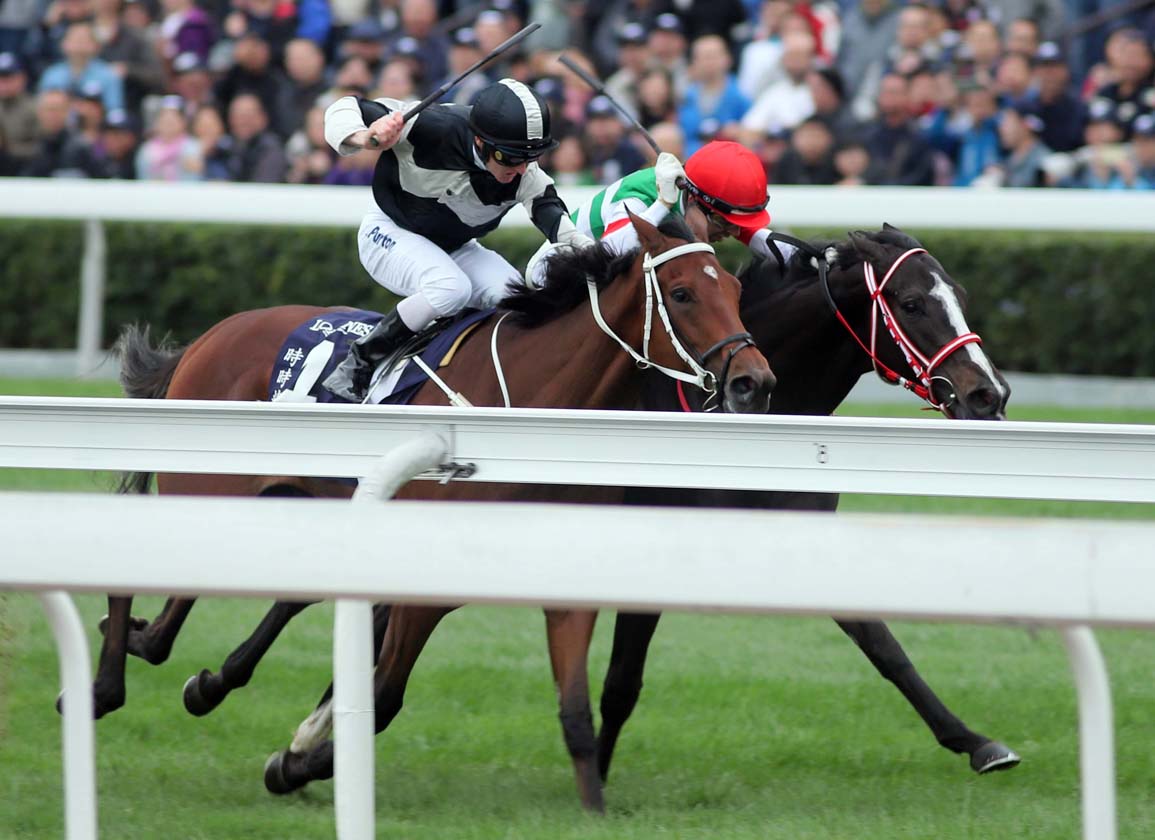 Exultant (Ire) (Teofilo {Ire}–Contrary {Ire}, by Mark of Esteem {Ire}), arguably the best stayer to be based in Hong Kong and the jurisdiction's Horse of the Year in 2019-2020, has been officially retired from racing, according to information on the Hong Kong Jockey Club website.

Bred by Belinda Strudwick's Co. Kilkenny-based Ballygallon Stud, Exultant was raced by his breeder as Irishcorrespondent in Europe and was trained by Mick Halford to a third-place effort behind Churchill (Ire) (Galileo {Ire}) and Thunder Snow (Ire) (Helmet {Aus}) in unsuitably soft ground in the G1 Irish 2000 Guineas in 2017. Sold to Hong Kong as a Derby prospect following a fifth to Benbatl (GB) (Dubawi {Ire}) in the G3 Hampton Court S. at Royal Ascot, Exultant was a running-on third in the Derby the following March, but hit his straps really and truly over further when taking out the G3 Queen Mother Memorial Cup (2400m) ahead of a runner-up effort to 'TDN Rising Star' Pakistan Star (Ger) (Shamardal) in the G1 Champions and Chater Cup over the same trip.

Exultant displayed the grit and determination that would come to define him during his next campaign, out-toughing future Japan Horse of the Year Lys Gracieux (Jpn) (Heart's Cry {Ire}) for a breakthrough top-level success in the 2018 G1 Longines Hong Kong Vase (2400m) (see below) while becoming just the third locally based galloper to take out the race. He carried that momentum into the second half of the season, adding the G1 Citi Hong Kong Gold Cup (2000m) before the first of two successes in the Champions and Chater Cup.

Only an undefeated season by Beauty Generation (NZ) (Road to Rock {Aus}) denied Exultant a Horse of the Year crown on that occasion, but he made amends during his next preparation, with four wins from seven appearances, including a tough-as-nails win over Derby hero Furore (NZ) (Pierro {Aus}) in the G1 FWD QE II Cup (2000m) (video) and a second straight Champions and Chater Cup. He was also third in the Hong Kong Vase after being forced to make the running from barrier 14.

Though he failed to greet the judge in his seven starts in 2020-2021, he was never disgraced, finishing runner-up to a primed Mogul (GB) (Galileo {Ire}) in the Vase in December while finishing third to likely Horse of the Year Golden Sixty (Aus) (Medaglia d'Oro) in defence of his title in the QE II Cup and in the Champions and Chater Cup in his final career trip to the post May 23. Zac Purton, also the regular partner of Beauty Generation, rode Exultant in his final 19 starts and in 25 of his 32 local appearances.