Honeybee Next for Promising Motion Emotion 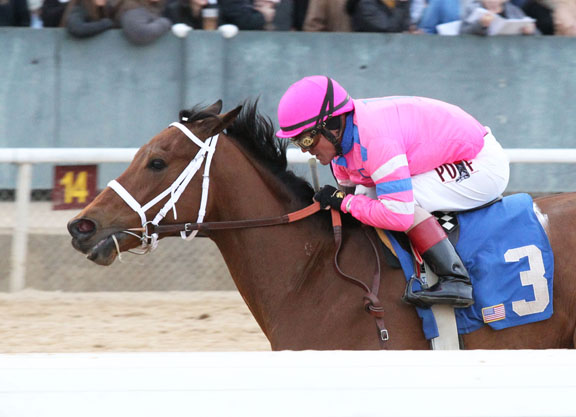 When Motion Emotion (Take Charge Indy) drew away to an effortless 6 3/4-length allowance victory Feb. 17 at Oaklawn Park (video), owner Mark DeDomenico had plenty of interest in his promising filly, but the bay sophomore will still be carrying DeDomenico's colors when she heads postward in Saturday's GIII Honeybee S.

“There were quite a few people over to visit her looking for private purchases,” trainer Tom Van Berg said Tuesday. “Dr. Mark had a deal in place and then at the last moment, I think he watched the replay again, and decided he wanted to keep her. So we changed course and we're staying with her. We are going to point for the Honeybee this coming Saturday. Hopefully she'll repay that decision.”

“Mike is a firm believer that a race equals two or three works,” Van Berg said. “And he didn't really have her tightened down. He told us he was going to give her a start so we'd get two or three works into her and give her experience. She ran a decent race, but it wasn't lights out and it was against the boys, so it kind of worked out to plan.”

Motion Emotion joined Van Berg's barn at Churchill Downs and made her second start over a sloppy strip in Louisville Nov. 1 where things decidedly did not go to plan.

“About four strides out of the gate, her back end went totally out from beneath her and she slipped,” Van Berg recalled of that ninth-place effort. “The starter at Churchill told me, 'Tom, it was so violent and so quick, I can't believe she didn't go down. I thought she might have broke her down because her legs went out from under her at such an awkward angle.' And then she gathered herself up and the jock, for whatever reason, he went five or six wide around the turn to go head to head with the leader. She made this massive sweeping move and I thought, 'I'm going to move by 10 by the way she's moving.' And then she got tired. The winner drew off to win by six. If the jock had just sat, we could have run a good second. We weren't going to beat the winner with the start we had.”

Motion Emotion began her 2019 campaign with a front-running maiden score going six furlongs at Oaklawn Jan. 25. She stretched out to 1 1/16 miles last time out and glided home a never-in-doubt winner.

“I wasn't surprised that she was as good as she was stretching out, but I didn't know to what extent she would show that form,” Van Berg said of the Feb. 17 victory. “She had acted a lot like that in the morning where you'd see her do things so easily and so effortlessly and she covered a lot of ground. And she did it with such class and a mind set that showed she was enjoying what she was doing out there all the time. She is just a really neat filly to be around; she has a great mind on her.”

Both of Motion Emotion's victories to date have been recorded in front-running fashion. Van Berg decided to test his charge's ability to rate with a four-furlong drill in :50.00 (60/102) at Oaklawn last Saturday.

“It wasn't the work we were looking for,” Van Berg admitted. “I wanted to set her in behind another pretty nice horse that we had. I didn't want him to exert too much and take too much out of her, but I wanted to see how she would respond if she had to be behind horses. So he settled in behind and the lead horse kind of did the right fractions and Jon [Court] just kind of eased her up there, never pushed her up a ton and she never really got head to head, but she did it really easily and she came out like it was just a gallop. So hopefully we got enough out of it. She's definitely fit, so hopefully we don't need anymore. She came out of it great and she showed she could relax behind horses and can rate if she needs to.”

While there is a forecast for rain in Hot Springs Saturday, Van Berg said he isn't too worried about an off track.

“She's trained great on the off track and she's worked good on the off track,” Van Berg said. “I think that [Churchill race] was just an isolated incident. Hopefully it was and, if it rains Saturday, we'll be ok. We've nominated her to a couple different places just to keep our options open, but that's where we are pointing to now. We'll see what the track looks like on Saturday.”

The first future wager pool for the GI Kentucky Oaks opens Friday and Motion Emotion is listed at 50-1 on the morning line.

“I'd put money on her,” Van Berg said with a laugh. “I have faith in her. She's a nice little filly. I don't think at this point we're a Bellafina or one of those top ones, but I think we're right in the next tier. If she takes another step forward, there is no telling how good she can be. She has the mind for it and she has the body for it. Everything she has done, it seems like she is that type of filly. Time will tell. Hopefully she'll be able to keep on going towards the Oaks. That would be nice. It's a long time between now and then. A lot of things could happen.”