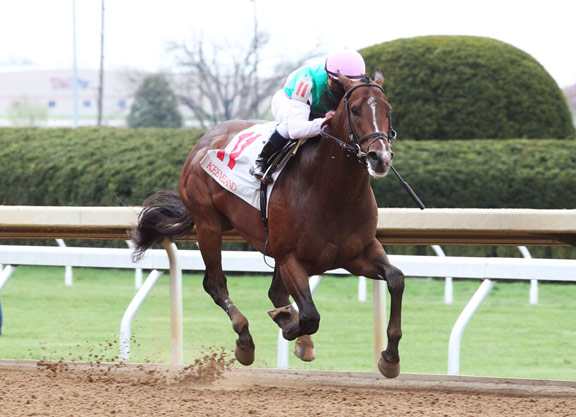 Honest Mischief (Into Mischief-Honest Lady, by Seattle Slew) is the first son of the record-setting leading sire Into Mischief to stand in New York. He also hails from the blue-blooded Juddmonte family that produced Empire Maker, who died at age 20 in January of 2020, leaving a void in the Thoroughbred breeding industry. Raced by Juddmonte and trained by Chad Brown, Honest Mischief now begins his stud career at Becky Thomas's Sequel New York. He will stand for $6,500 LFSN.

Honest Mischief broke his maiden his second time out as a sophomore at Keeneland by eight lengths and was tabbed a 'TDN Rising Star' by virtue of that win. In just his fourth career start, he was third behind Shancelot (Shanghai Bobby) in the GII Amsterdam S. at Saratoga. He was also a runner-up to Volatile (Violence) in 2020 at Churchill Downs in the Aristides S. He retired with a record of 9-4-3-1 and earnings of $287,464.

“Honest Mischief showed a lot of early potential as a dirt horse, especially in being rated very highly by TDN as a Rising Star when he broke his maiden by eight lengths,” said Charl Van Der Weshuizen, Stallion Consultant at Sequel. “That race actually gave him a Ragozin rating of two, which is phenomenal in any young horse.”

Van Der Weshuizen said he felt that Honest Mischief had inherited many of the same traits as his sire.

“I do think Honest Mischief has a lot of the same qualities as his sire, Into Mischief,” said Van Der Weshuizen. “If you actually look at the conformation of Honest Mischief, you see the similarities. He's got a nice deep girth. Personally, I like the fact that he's slightly longer in the back, and he has actually got a shorter cannon, which I like in conformation. He has a really good hip to him as well.”

“Honest Mischief has a really fluent walk,” he continued. “I think he has a good overstep, which is a good sign he is a really good, smooth walker. That compliments his whole conformation setup. A horse that walks quite relaxed, with his head down, does well as a racehorse. Especially with the overstep that they have, they possess the ability for a little bit of extra reach, which always comes in handy. I think giving him the right mare, you will breed a lot of speed. Honest Mischief was a speed horse and he hails from a real Classic speed family.”

With his pristine pedigree and speed on the dirt, Honest Mischief's connections said they were anticipating wide support from breeders across the country, many of whom are new to the New York breeding program.

“Honest Mischief has more people outside of New York as shareholders than any other horse we have stood,” said Becky Thomas, owner of Sequel New York. “For these out-of-state people to contact me and say we want to be involved in this horse really means something. Juddmonte retained a number of breeding rights and they'll be sending mares to him. This is the first time that they've utilized the New York program.”

“An Into Mischief who ran as fast as Honest Mischief did, comes from a rock-solid family and has a support team under him is remarkable,” said Thomas. “I could only sell 20 shares and I have a waiting list.”

Honest Mischief arrived at the sprawling Columbia County, New York farm about two and a half months ago. Of the 89 mares on the farm, a good number have shipped in to breed to Honest Mischief.

“The interest in Honest Mischief has been really phenomenal,” said Van Der Weshuizen. “You know, just by looking at the number of views he has had and people inquiring about him, it's a very good sign. We've had mares that were bought at the Keeneland Sale and then shipped here to foal and are booked to Honest Mischief. So it's very exciting.”

“I have to say he's been really, really good settling into his new home,” he added. “At first, we had him in a smaller paddock. I was hand-walking him a few times a day for a couple of weeks, just to actually get him acclimated into the stud life. Then after that, he moved into his big paddock and he's actually been a pleasure and settled in quite nicely.”

In November 2020, Into Mischief set a new Northern Hemisphere record for single-season earnings by a sire, overturning the reign of Tapit as his son Authentic was crowned 2020 Horse of the Year. The Sequel team said that getting the first son of Into Mischief to stand in the state, and at a reasonable price, was an attention getter, particularly when combined with his dam's royal breeding and her success as a broodmare.

Juddmonte's Garrett O'Rourke told the TDN in November of last year, “Honest Mischief was pegged as a real talent by our exercise riders from the very beginning. He had raw speed, he was sound, and he had desire. He placed behind stars like Shancelot and Volatile at the top of their games and when he won, he won like a Grade I horse. Honest Mischief has such a genetic concentration of classic talent, on top and bottom of his pedigree, that expectation of his success at stud is just a given.”

“Honest Mischief was bred and raced by Juddmonte Farms, which by itself is an extraordinary thing,” said Van Der Weshuizen. “They are globally renowned for their racehorses. To be able to do business with them, and actually have the opportunity that they picked us basically to venture into Honest Mischief with them in New York, by itself, is a big accomplishment. It will be great for Sequel, and I hope for the New York breeding program.”