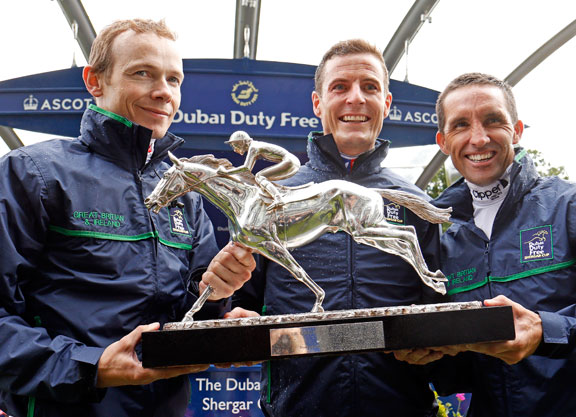 Team Great Britain and Ireland emerged victorious in the Shergar Cup international jockeys' competition on Saturday at Ascot. The team, comprised of captain Jamie Spencer, Neil Callan and Fran Berry, compiled 86 points across six races, including three wins. Two of those wins were recorded by Fran Berry, who won the Silver Saddle Award for leading rider at the meeting.

“I didn't realise that we'd won the competition until after I'd crossed the line [in the last race],” said Berry. “It's great to get the call up, and to ride a couple of winners, I am very thankful for that. It's been a lucky competition for me, I've been here three times and it has always gone well for me. It's a big day, you get a kick out of it. You work hard through the week, but it's all about getting Saturday winners.”

Team Great Britain and Ireland handily beat the Rest of the World Team (Kerrin McEvoy, Keita Tosaki and Anthony Delpech), who were second with 67 points. Team Europe (Adrie de Vries, Umberto Rispoli and Alexander Pietsch) was just behind with 64 points, while The Girls (Emma-Jayne Wilson, Hollie Doyle and Hayley Turner), the winners two years ago, trailed in with 23 points. Apprentice Hollie Doyle replaced Australia's Michelle Payne on The Girls team after Payne was declared unfit to ride on Saturday morning by doctors after contracting a virus.

McEvoy, captain of team Rest of the World, said, “I didn't personally get a winner but I was up amongst the placings and I'm happy for our team coming second, we finished with a real flurry. It's been a great day, with a tight contest, unfortunately the Irish Boys beat us.”

The Shergar Cup drew a crowd of 31,696, up from 29,276 last year, and Nick Smith, Director of Communications and Racing at Ascot, said, “What was particularly interesting today was that 84% of this great crowd were through the turnstiles by 1:15 p.m., showing that they were keen to see the racing. With a capacity of about 12,000 for the concert, the evidence today is that the majority of the crowd were here to fully embrace the racing, which is very gratifying. It shows the event and the structure are building well.”

“We were very pleased with how the races worked out again– there were maximum fields for all of them,” Smith said. “The algorithm that we used for the allocation of the jockeys was particularly pleasing, with three out of the four teams in with a chance of winning the Dubai Duty Free Shergar Cup coming into the last race. There were also seven jockeys capable of taking the Alistair Haggis Silver Saddle approaching the final contest. All in all, it was a tremendous day. We were sorry that Michelle Payne had to miss out, but it was good to see Hollie Doyle ride well and nearly have a winner. Our thanks go to all the visiting jockeys for their help in promoting the event.”