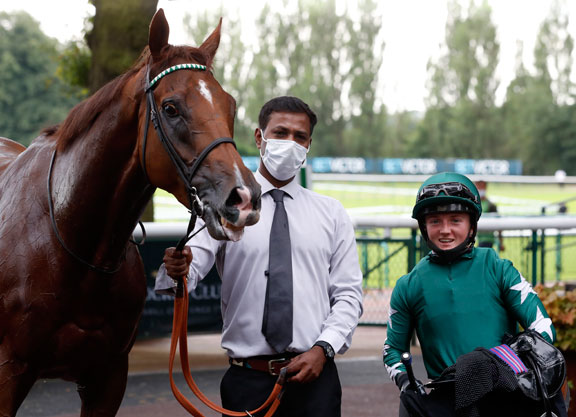 Hollie Doyle recorded a 899-1 five-timer at Windsor on Saturday, in the process becoming the first female rider to win five races on a card in the UK.

Doyle has enjoyed a landmark campaign, earning a first win at Royal Ascot in June before taking her first group race with Dame Malliot (GB) (Champs Elysees {GB}) in the G2 Princess of Wales's S. in July and gaining a riding contract with Imad Al Sagar. It was for that boss that she won the card's featured G3 Winter Hill S. aboard Extra Elusive (GB) (Mastercraftsman {Ire}). She also took the other stake on the card, the Listed August S., aboard Aziz Kheir's Le Don De Vie (GB) (Leroidesanimaux {Brz}).

“When I woke up this morning I thought it could go one way or the other. I could have a good day or a really bad day,” Doyle told Sky Sports Racing. “The last few years have been awesome, but you've got to keep on improving and pushing more and more. I like riding under pressure, I feel with the better rides I get I like it more. I love riding horses, you've got to to do this job.”

Extra Elusive's trainer Roger Charlton said, “I'm really pleased for him and for Hollie, it was a great ride. It wouldn't be his choice of ground or his choice of track, but he did it well and I would say it's the best performance he's put up. Hollie is remarkable–he's not an easy horse, he's quite keen but she had him very settled there. The biggest work is carrying the saddle out for her, I think there must have been three stones of lead in there.”