Hollie Doyle At The Double in Ascot’s Champions Sprint 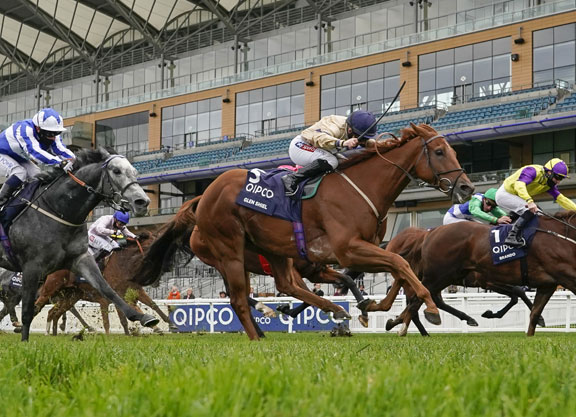 Not content to rest on her laurels, rider-of-the-moment Hollie Doyle claimed a career-best success when guiding last month’s G1 Haydock Sprint Cup runner-up Glen Shiel (GB) (Pivotal {GB}) to a dramatic success in Saturday’s Qipco British Champions Sprint S. at Ascot. Hambleton Racing Partnership’s veteran chestnut, who had previously claimed a first pattern-race triumph in The Curragh’s Aug. 8 G3 Phoenix Sprint S., broke like greased lightning from the gates and was in command under a tight hold until allowed a measure of rein at halfway. Looking certain to be swamped when a host of rivals threatened from all angles approaching the eighth pole, the 16-1 chance found Doyle at her maximum when fellow old stager and 2016 third Brando (GB) (Pivotal {GB}) gained an edge in the closing stages and rallied gamely in a ding-dong tussle to pluck a nose victory from the jaws of defeat in the final stride. Lael Stable’s One Master (GB) (Fastnet Rock {Aus}) finished with her usual gusto to edge Art Power (Ire) (Dark Angel {Ire}) for third.

“I didn’t think I’d won, so to have had the result we have was incredible and I’m in a state of shock right now,” said a delighted Doyle after securing a first triumph at the highest level. “We had a really good old battle with [G1 July Cup hero and eventual fifth] Oxted from the three-furlong pole and I thought I’d be doing well to hold on like I did, but he is such a game horse. He is incredible and has got quicker with age. When we first got him, he was running over 10 furlongs [for Andre Fabre] in France and didn’t show a whole lot of speed, but the further we dropped him back, the quicker he has got. This isn’t about me, it’s about [trainer] Archie Watson, who has campaigned this horse unbelievably and no one else would have won a Group 1 with this horse. It is a dream come true, a massive dream come true, especially on this horse and everyone in the yard adores him. My aim, at the start of the year, was to ride a Group winner and I always said a Group 1 one day, but I didn’t think it would come this year. I don’t get too carried away, but I’m a bit delusional as to what is going on at the moment as it has all been a bit of a whirlwind.”

Popular veteran Brando, contesting a fifth straight renewal and registering his best effort in this event, rolled back the years and provided a flashback of all his old sparkle in getting to within a pixel of springing an 80-1 shocker. Jockey Tom Eaves enjoyed mixed emotions, but was nonetheless delighted with the performance and said, “You are always gutted finishing second, but he has run a stormer of a race. It was a bob of the heads and I’m delighted, but gutted at the same time. He has been running okay, he ran well [when third in the rescheduled G3 Bengough S.] at York last Saturday and that probably put him right for this. York has never been his sort of track, but he likes it here on this big, stiff track. It is a great training performance.”