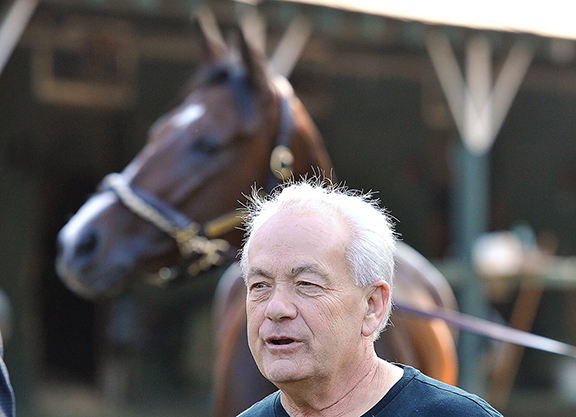 A complaint was filed in the Superior Court of San Diego by Hall of Fame trainer Jerry Hollendorfer and The California Thoroughbred Trainers against the Del Mar Turf Club that the plaintiffs hope will ultimately lead to Hollendorfer being able to resume training at the Del Mar meet.

A complaint is just the first move in a legal battle that cannot move on to the next step until the court sets a hearing date. With the Del Mar meet, one of two conducted annually at the Southern California track, concluding Sept. 3, how quickly the court reacts will no doubt play a major factor in deciding Hollendorfer's immediate fate.

“Ex parte applications for temporary restraining orders are not easy to obtain,” he said. “I think we have substantial arguments to support obtaining one, but I would say the odds are against us. That's based on what I've seen, that the courts hate to intervene. I'm hoping that won't be the case.”

Prior to the beginning of the meet, Hollendorfer was denied stalls by Del Mar officials and told his entries would not be accepted. This came after he was banned by Santa Anita after a fourth horse under his care had to be euthanized at a meet where there were 30 fatalities. In addition, Hollendorfer's former small string in New York, all owned by Larry Best, are now trained by former assistant Don Chatlos Jr. Once it became clear that Hollendorfer was not going to be allowed to compete at Del Mar, several horses that had been under his care were turned over to his long-time assistant Dan Ward. The list of Ward-trainees includes More Ice (More Than Ready), who will run in Wednesday's Runhappy Oceanside S.

Del Mar has never publicly given any reason why it banned Hollendorfer but in a previous interview with the TDN, Hollendorfer's attorney Drew Couto alleged the track was not willing to undertake “the “PR risks” involved with letting Hollendofer compete.

The court filing lists the action as a “complaint for emergency relief” and lists four causes of action: a temporary restraining order, a preliminary injunction, declatory relief and breach of contract.

Other than confirming that the compliant was filed, Couto declined further comment.

Involving the CTT in the case opens the doors for new arguments that Del Mar does not have the right to ban Hollendorfer. According to the complaint, the CTT and Del Mar have an agreement whereby Del Mar cannot discriminate against any CTT member trainer in an arbitrary or capricious manner. Vienna contends that denying Hollendorfer the ability to race at the meet because of what he alleges are public relations concerns violates the CTT-Del Mar agreement.

Vienna also contends that should Del Mar deny a CTT member the right to participate at the meet the contract calls for an expedited arbitration process before a mediator. He says that Del Mar has refused to abide by that provision.

“Section six of the contract provides for the CTT to reach a determination as to whether a person who has been denied allocation of stalls has a grievance on the basis that the denial was done arbitrarily or capriciously,” he said. “And if the CTT believes there is merit to the complaint of the trainer, there is a provision in there that there will be a grievance presentation on behalf of the trainer by the CTT. Del Mar has argued that this provision doesn't apply. We disagree and believe that the provision provides for arbitration before a hearing officer mutually agreed upon by the two parties. The only rational that I have seen by Del Mar for his exclusion is that having him race there is a matter of bad public relations. That seems to me to be arbitrary and capricious, so we are desirous of having a hearing.”

The complaints also alleges that Del Mar is attempting to take away stalls Hollendorfer has been granted by Los Alamitos.

A portion of the complaint reads: “DMTC has now taken the position that it is entitled to request LARC remove Hollendorfer from stalls allocated to him by LARC under certain finding provisions of the 'Stabling and Vanning' Fund shared by select racing associations.”

The TDN emailed a Del Mar official seeking comment on Hollendorfer's legal complaint, but as of late Tuesday afternoon, had not received a response.