Hollendorfer to Relocate to Oaklawn 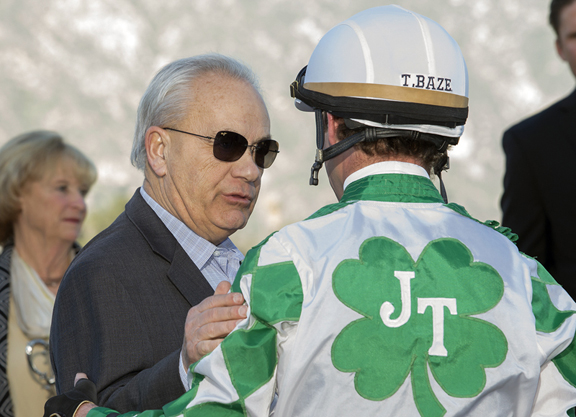 Still not allowed to race at The Stronach Group tracks in California, Hall of Fame trainer Jerry Hollendorfer will spend his winter based at Oaklawn Park.

“I am not able to run at Golden Gate or Santa Anita, so I have no choice but to go somewhere and the Oaklawn folks gave me stalls. So that's where I am going,” Hollendorfer said.

The story was first reported by the Daily Racing Form.

In June, Hollendorfer was banned at The Stronach Group tracks, which, in California, include Santa Anita and Golden Gate Fields. The ban came after a fourth Hollendorfer-trained horse had broken down at the Santa Anita meet and had to be euthanized. The trainer has been left to scramble ever since, turning his horses set to race at Santa Anita over to his assistant Dan Ward, while trying to win reinstatement in the courts. Hollendorfer was never banned at Los Alamitos and was able to get an injunction that blocked Del Mar's decision to also ban him.

When asked what he would do after the Oaklawn meet concluded, Hollendorfer said, “I'm taking it one step at a time.”

Despite his record of being one of the most productive trainers in the sport, Hollendorfer said he didn't think it would be easy to break in at Oaklawn.

“I always do the best I can, but that's a tough place to go and expect to have a huge meet,” he said. “We have some horses we think will fit there. We think we will do ok.”

When asked if the news that he had been cleared to race at Oaklawn had made him more optimistic about the future, Hollendorfer replied, “I've never been pessimistic. I've had problems, but I am facing my problems.”

Hollendorfer added that Ward would be working beside him at Oaklawn rather than overseeing a string at Santa Anita.

With California racing struggling to keep up with other tracks when it comes to purse structure, Hollendorfer doesn't figure to be the only familiar name out of the West Coast who will be competing at Oaklawn. The Racing Form also reported that California regulars Richard Baltas, Phil D'Amato, Mark Glatt, Peter Miller and John Sadler are likely to have stalls at Oaklawn, which offers larger purses than Santa Anita does.