HKIR Week Is Here, a.k.a. Merry Early Christmas To Me 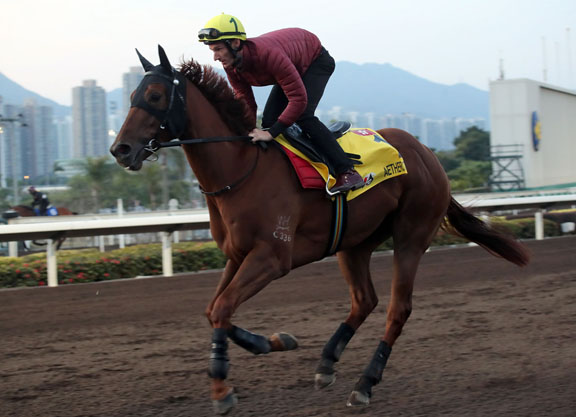 Let’s see: according to FlightAware.com, we are currently just over three hours into this 15 hour and 15 minute flight to Hong Kong, one which I was increasingly convinced was not going to happen given the snow that pelted this 777-300ER, even as we were being de-iced. But after a white-knuckle ride from my home in South Jersey to Newark Liberty International, to my great relief, we began to taxi out about 90 minutes behind schedule. I am just happy to be airborne, and Hong Kong-bound.

I’m not sure why this is the case, but the 51 weeks between the time one edition of the Longines Hong Kong International Races finishes and the time I set foot aboard United flight 179 the following December seems to really fly by. There’s obviously enough going on once January rolls around with the build-up to the Triple Crown and then the boutique meets over the summer and then Breeders’ Cup and then, BAM! It’s HKIR time.

Don’t get me wrong, I love me some home cooking and racing stateside, but HKIR is my Breeders’ Cup. Four big races worth HK$93 million (just shy of US$12 million), horses from here, there and everywhere. It’s my sweet spot.

The couple of weeks since invitations were announced have been something of a roller coaster ride for the event. Anticipation couldn’t have been higher than when it was revealed that Magical (Ire) (Galileo {Ire}) was an intended runner in the G1 Longines Hong Kong Cup, where she would clash with Almond Eye (Jpn) (Lord Kanaloa {Jpn}), arguably the second-best horse on the planet. Well, within 12 hours, Magical was out and over the weekend, the connections of Almond Eye announced she would not be making the four-hour trip to Hong Kong, having spiked a bit of a temperature after her final piece of work at home. I made my second trip to Hong Kong in 2005 and was set to see Silent Witness (Aus) (El Moxie), only to have him declared from the race despite all best efforts from his connections. But I gotta say, this one hurts a little bit more. It’s still a field of eight running for $3.5 million, so all’s not lost. But I am bummed.

Rest assured–the stars will still come out to play. The Japanese contingent may not have a Maurice (Jpn) (Screen Hero {Jpn), but it does have an Indy Champ (Jpn) (Stay Gold {Jpn}) and a Lucky Lilac (Jpn) (Orfevre {Jpn})–whose dam Lilacs and Lace (Flower Alley) was a Grade I winner stateside–and a Deirdre (Jpn) (Harbinger {GB}), who makes Hong Kong the latest port of call in what has been an ambitious and successful campaign.

Melbourne Cup form has often read well in the G1 Longines Hong Kong Vase and Charlie Fellowes will hope that Cup runner-up Prince of Arran (GB) (Shirocco {Ger}) doesn’t draw in the parking lot as he did 12 months ago. Called To the Bar (GB) (Henrythenavigator) has an interesting back story which I’ll tell in Sunday’s TDN Europe.

The G1 Longines Hong Kong Sprint has been dominated by the locals down the year and Aethero (Aus) (Sebring {Aus}) has a chance to make history by becoming the first 3-year-old to win the race. But to do so, he’ll have to hold off last year’s 1-2-3 Mr Stunning (Aus) (Exceed and Excel {Aus}), D B Pin (NZ) (Darci Brahma {NZ}) and the consistent Beat the Clock (Aus) (Hinchinbrook {Aus}). Look for my feature on him and his breeders Tyreel Stud as the cover story of my HKIR preview package in Saturday’s paper.

As a citizen of the world, it will be interesting to see just what Hong Kong looks like after six months of anti-establishment protests that have wreaked havoc on the city’s infrastructure. The Chinese University of Hong Kong was, as recently as three weeks ago, the scene of perhaps the most violent and disruptive protests and, at least in part, led to the cancellation of racing at Happy Valley that week, the second such cancellation of the year. The CUHK sits about a half-mile from the stables at Sha Tin. Things seem to have calmed down some over the last two or three weeks, but I’d be lying if I didn’t say that this trip was in serious doubt and that I was close to taking a pass. But HKIR and Wednesday’s Longines International Jockeys’ Championship go on and for that, I am grateful.