Hit the Road Works for Pegasus 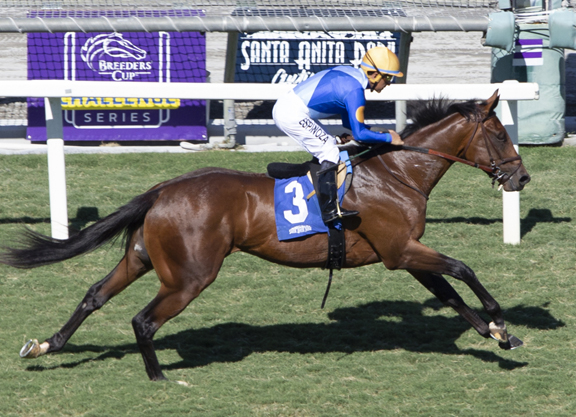 Hit the Road (More Than Ready), aiming for the Jan. 29 GI Pegasus World Cup Turf Invitational at Gulfstream Park, worked five furlongs in :58.40 (1/1) over the Santa Anita turf Sunday. The 5-year-old, trained by Dan Blacker, capped a four-race win streak with a win in the GI Frank E. Kilroe Mile S. last March. He has been off since a third-place effort in the GII City of Hope Mile S. last October. The nine-furlong Turf Invitational will be Hit The Road's first start beyond a mile.

Also working over the Santa Anita turf Sunday in preparation for an engagement on the World Cup card in Hallandale,  Bodhicitta (GB) (Showcasing {GB}) went four furlongs in :47.00 (1/1). The 6-year-old mare trained by Richard Baltas for owner Calvin Nguyen, is expected to start next in the GIII Pegasus World Cup Filly & Mare Turf Invitational. Winner of the 2020 GII Yellow Ribbon H., Bodhicitta was second in the 2020 GI Gamely S. and third in that race in 2021. She was most recently second in the Jan. 1 GIII Robert J. Frankel S.

Working for the Pegasus Turf in Florida Sunday, Joseph Allen's Doswell (Giant's Causeway) went seven furlongs over the Palm Meadows turf in 1:22.95 (1/2). The Barclay Tagg trainee is coming off a front-running victory in the Dec. 18 GII Ft. Lauderdale S.