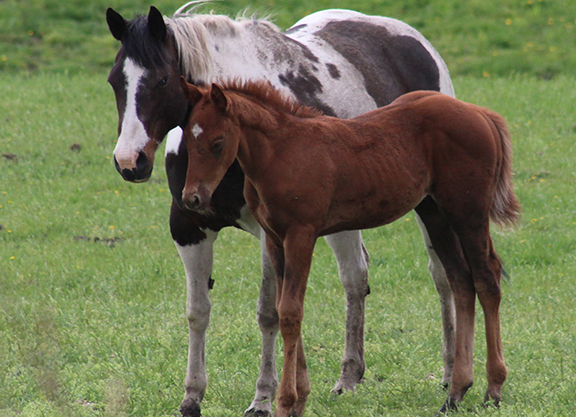 When a Washington-bred 2-year-old who debuts Wednesday at Emerald Downs was a month old, he needed a mother. His dam had died of colic. And a paint mare on a nearby farm in Washington needed a baby to care for after her foal died shortly after birth. The two came together and the result is a healthy, now 2-year-old colt, who will make his debut Wednesday at Emerald Downs.

It's a sweet story of two very different horses coming together to fulfil each other's needs and one that so resonated with breeder Tim Floyd that he turned it into a children's book, “Baby Haynes, a True Story About Adoption and Unconditional Love.”

The next chapter will be written in the day's sixth race when the book's star, now appropriately named Myuddermamasapaint (Haynesfield), will begin his racing career.

“He's working like he's a runner and I know the barn is pretty high on him,” said Floyd, also a co-owner of the colt.

But Myuddermamasapaint doesn't have to be star to stay close to Floyd's heart. Floyd was adopted and saw similarities in his story and that of the foal and the nurse mare. He knows that adopted parents and children can love each other just as much as biological parents and children, a sentiment he shares throughout the book.

“I couldn't have had better parents,” he said. “They were just unbelievable.”

The first month of Myuddermamasapaint's life was routine, but that changed when the dam In Vitro (Demon Warlock) was stricken with colic and had to be put down. It is Baby Haynes or Myuddermamasapaint who tells the story in the book, describing the ordeal and how it ended. “She kissed me goodbye and went to heaven,” the book reads.

Floyd had heard that there was a breeder in the area that had a paint mare whose foal has just died and he arranged to see if the mare would accept Baby Haynes. The two acted like they had known each other forever.

“It ended up working out really well,” Floyd said. “The grafting process went great and the baby took to the mare really nicely. The baby was hungry and the mom wanted a baby.”

The mare's instincts kicked right in. On the first night they were together, the two were separated and then brought together every two hours for a feeding. Floyd said the mare pined for her new child.

“We separated them and each time we took the baby away she got more and more upset,” Floyd said. “You could tell that she wanted that baby. We knew that this was going to work because every time we separated them she would get upset.”

Local television station WKHQ got wind of Baby Haynes's story and came to Floyd's farm to do a feature. (Click here to watch.) There was so much positive feedback that Floyd decided he would write the children's book (which prompted this feature). It is his first.

“When we posted videos of the paint mare and the baby running around our farm it got over 20,000 views,” he said. “I thought that people love stories like this. I'm also adopted, so the adoption part of it kind of hit home with me. I knew there would be a lot of interest in this so I decided to write a book. I wanted to do a children's book with the story being told by the horse.”

Maybe there will be a sequel as Floyd believes Myuddermamasapaint has a bright future.

“He's a big beautiful, long-striding horse,” he said. “I think he'll get even better with distance. I'm glad the race is at six furlongs and not five. For this race, we want him to hit the board. If he wins it will be a bonus.”

The book, which is 22 pages long, is geared toward smaller children, 10 or younger. It was released in March and Floyd said he has gotten nothing but good reviews. Selling for $14.99, the book isn't the sort of thing Floyd can expect to make much money off of, but that wasn't the idea behind the book. He wanted to tell a story, one of unconditional love.