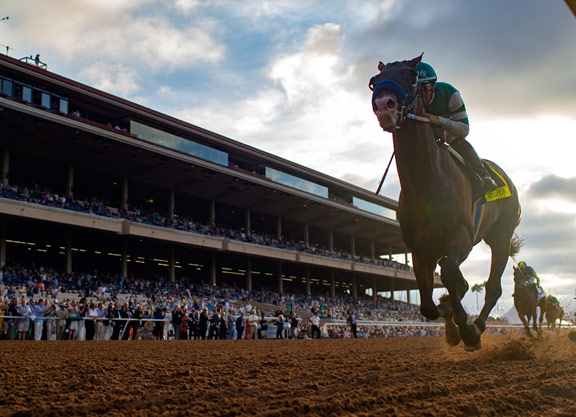 Higher Power (Medaglia d’Oro) proved to be yet another shrewd purchase by bloodstock agent David Ingordo on behalf of Hronis Racing, giving the Eclipse-winning owners and trainer John Sadler their second straight victory in the GI TVG Pacific Classic, a “Win and You’re In” event for the GI Breeders’ Cup Classic. These connections won last year’s Pacific Classic and Breeders’ Cup Classic with subsequent champion Accelerate (Lookin At Lucky), another Ingordo purchase, albeit as a yearling.

Showing good early initiative, the 9-1 shot pressed pacesetting Quip (Distorted Humor) from second early fractions of :23.68 and :47.69. Longshot Mongolian Groom (Hightail) drew up on his outside as three-quarters went up in 1:12.65 and, in turn, Higher Power inched up to look Quip in the eye heading into the turn. That lasted only a moment as Higher Power instantly powered clear of his rivals to win as he pleased. Draft Pick (Candy Ride {Arg}) nipped Mongolian Groom for second.

“There were no special instructions, just to make him comfortable,” jockey Flavien Prat said. “We were in a good spot all the way around. At the three-eighths [pole] I asked, and he took up the bit and went from there. He was traveling well all the way around. I thought he would run a good race today. He had been training so well, I thought he’d have a good one in him today.”

Winning two of his first five starts for breeder Pin Oak Stud and trainer Donnie Von Hemel, Higher Power was transferred to Mike Stidham in the middle of 2018 and made four starts for that conditioner, winning his final one in a muddy Fair Grounds optional claimer Mar. 16. Sent through the ring and newly rejuvenated Keeneland April Sale, he summoned $250,000 from Ingordo for these connections and was sent to Hronis Racing’s sole trainer, Sadler. Ambitiously spotted in the GI Gold Cup at Santa Anita May 27 in his first start on the West Coast, the 4-year-old checked in fifth behind Vino Rosso (Curlin). Switched to the turf next out and given a class break, Higher Power wired a one-mile optional claimer in Arcadia June 14 and was a half-length second in the restricted Wicker S. on the lawn at Del Mar last time July 21.

Higher Power made it a banner 35 minutes for his sire Medaglia d’Oro at Del Mar, becoming the Darley stallion’s 23rd Grade I winner just one race after Cambier Parc became the 22nd in the GI Del Mar Oaks. The bay colt is also Medaglia d’Oro’s 70th graded winner and 133rd black-type winner. In addition, he is the 27th Grade I winner produced by a daughter of Triple Crown winner Seattle Slew, who is also the broodmare sire of the legendary Cigar.

The winner’s dam Alternate hails from a long line of Josephine Abercrombie’s Pin Oak homebreds. A half-sister to Canadian Horse of the Year and dual Grade I winner Peaks and Valleys (Mt. Livermore), she produced MGSW millionaire Alternation (Distorted Humor), who stands stud at Pin Oak; as well as SW & GSP Interrupted (Broken Vow), who was purchased by Jane Lyon’s Summer Wind Farm for $575,000 in foal to Distorted Humor at last term’s Keeneland November Sale. Alternate is also responsible for the unraced 3-year-old colt Redirect (Speightstown) and a yearling colt by Curlin, who is entered in next month’s Keeneland September Sale. The 20-year-old mare was bred to Maclean’s Music this spring.