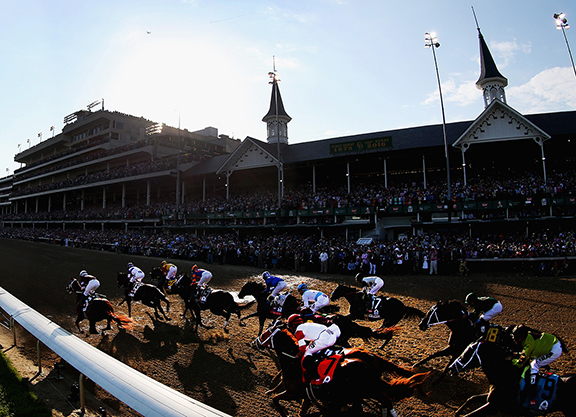 Saying he'd “like to briefly address the elephant in the room,” Kentucky Horse Racing Commission chairman Jonathan Rabinowitz opened the board's Oct. 20 videoconference meeting by attempting to reassure the racing community that elected and appointed officials are working to find a solution to a Sept. 24 Supreme Court of Kentucky opinion that told a lower court to re-examine the legality of historical horse race (HHR) gaming.

HHR handled $2.2 billion during the commonwealth's most recent fiscal year, and revenue from that form of gaming annually contributes tens of millions of dollars to purses at the state's five Thoroughbred tracks. The Supreme Court's opinion that HHR does not comply with the pari-mutuel wagering statute has imperiled that crucial source of funding.

“While I cannot say too much, I do want everyone to know that if the current Supreme Court opinion is rendered final, that this commission is committed to finding a solution,” Rabinowitz said.

“Additionally, after having numerous conversations with the governor, it's clear that the governor and his team are committed to finding a solution,” Rabinowitz continued.

“Lastly, I truly hope and believe that this legislature is equally committed to finding a solution to this bipartisan issue in order to save thousands of Kentucky jobs, millions in tax revenue annually for the commonwealth, and to preserve the commonwealth's signature industry as the best in the world,” Rabinowitz said.

Rabinowitz provided no specifics and there was no additional discussion of the topic among KHRC members, either directly after his statement or during the entirety of the meeting.

Chief among the various items that passed via unanimous voice vote on Tuesday was the KHRC's approval of 2021 race dates, awarded as follows:

Turfway Park: Jan. 1-Mar. 28 on a Thursday-Sunday schedule. The Thursdays, however, are all marked “optional” on the calendar provided by a KHRC spokesperson.

Churchill Downs: Apr. 24-June 26. With the exception of the first Wednesday that falls during GI Kentucky Derby week, the Wednesday programs are “optional.” Derby week will also feature an Apr. 27 Tuesday card but no racing Sunday, May 2. A Monday, May 31 (Memorial Day) program is also added.

Ellis Park: June 27-Sept. 4. With the exception of July 1, all of the Mondays-Thursdays within that date allotment are “optional.”

Churchill: Sept. 15-Oct. 3 on a Wednesday-Sunday schedule, with the Wednesdays “optional.”

Keeneland: Oct. 8-30 on a Wednesday-Sunday schedule.

Churchill: Nov. 3-28 on a Wednesday-Sunday schedule.

Susan Nash, the KHRC's executive administrative secretary, said that, “I'd like to point out that the total number of requested Thoroughbred dates for 2021, compared to what was awarded in 2020, shows as a negative one [date], representing a decline from last year.”

But Nash explained that's because Keeneland's request to host the two-date Breeders' Cup meet this year bumped up the state's 2020 total by two dates from 2019, “so consequently, there is actually an increase of one day for 2021” when the two Breeders' Cup dates are removed from the equation.