He’s ‘Back’: Gun Runner Sharp in Razorback Romp to Start 4YO Campaign 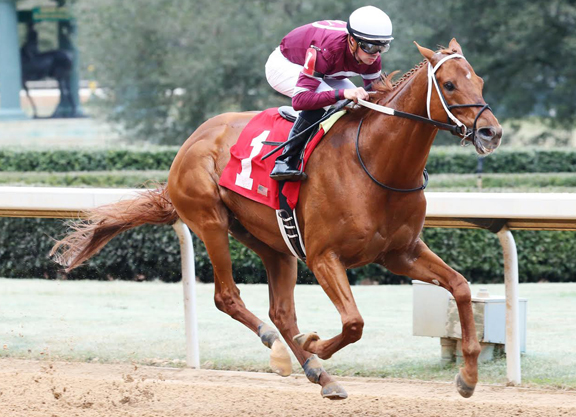 Gun Runner got his 2017 season off to the perfect start with a dominant wire-to-wire victory in Oaklawn Park’s President’s Day co-feature Monday. The chestnut–making his first start since an initial Grade I success in the Nov. 27 Clark H. at Churchill Downs–broke alertly and immediately cleared the field, winning for fun as the heavy chalk.

“He’s a fast horse,” said winning Hall of Fame trainer Steve Asmussen. “We’re very happy to get this race done. We’ve always been confident that this horse would get better with time.”

Kept honest by Blue Tone (Birdstone) through an opening quarter-mile in :23.18, Gun Runner began to drop that one through a half in :46.88 and stepped on the gas further around the far turn. The 4-year-old ran up the score in the lane, coasting across the wire 5 3/4 lengths clear of hard-trying Hawaakom. 9-year-old Domain’s Rap rounded out the trifecta.

“This horse just gets better and better,” jockey Florent Geroux said of Gun Runner. “He was in every fight last year and he feels even better this year. I’m hoping the sky’s the limit for him.”

Aside from the brilliant 2016 campaign put forth by eventual 3-year-old champion Arrogate (Unbridled’s Song), Gun Runner was arguably the most consistent sophomore colt of the crop. Winner of the GII Risen Star S. and GII Louisiana Derby last winter, he ran third in the GI Kentucky Derby behind Nyquist (Uncle Mo) and Exaggerator (Curlin) in May. He kicked off his summer campaign with a facile score in Churchill’s GIII Matt Winn S. and finished fifth over a sloppy track in the GI Haskell Invitational at Monmouth prior to completing the trifecta in the wake of Arrogate in the GI Travers S. in late August. The colt checked in second in both the Sept. 24 GII Pennsylvania Derby and Nov. 4 GI Breeders’ Cup Dirt Mile, and wrapped up his season with a front-running triumph in the Clark–defeating subsequent GI Pegasus World Cup Invitational runner-up Shaman Ghost (Ghostzapper) and GISW Hoppertunity (Any Given Saturday) in the process.

“Last year we learned to let Gun Runner just be Gun Runner and the success has come to him,” Asmussen continued. “I’m very thankful to Winchell Thoroughbreds and Three Chimneys for the opportunity to race this horse again this year. With his pedigree and his Grade I win last year, it’s very sporting of them to give us another year.”