Home » Archive » Europe » Beeby: 'Orby Is The One That Matters Most'

Beeby: 'Orby Is The One That Matters Most' 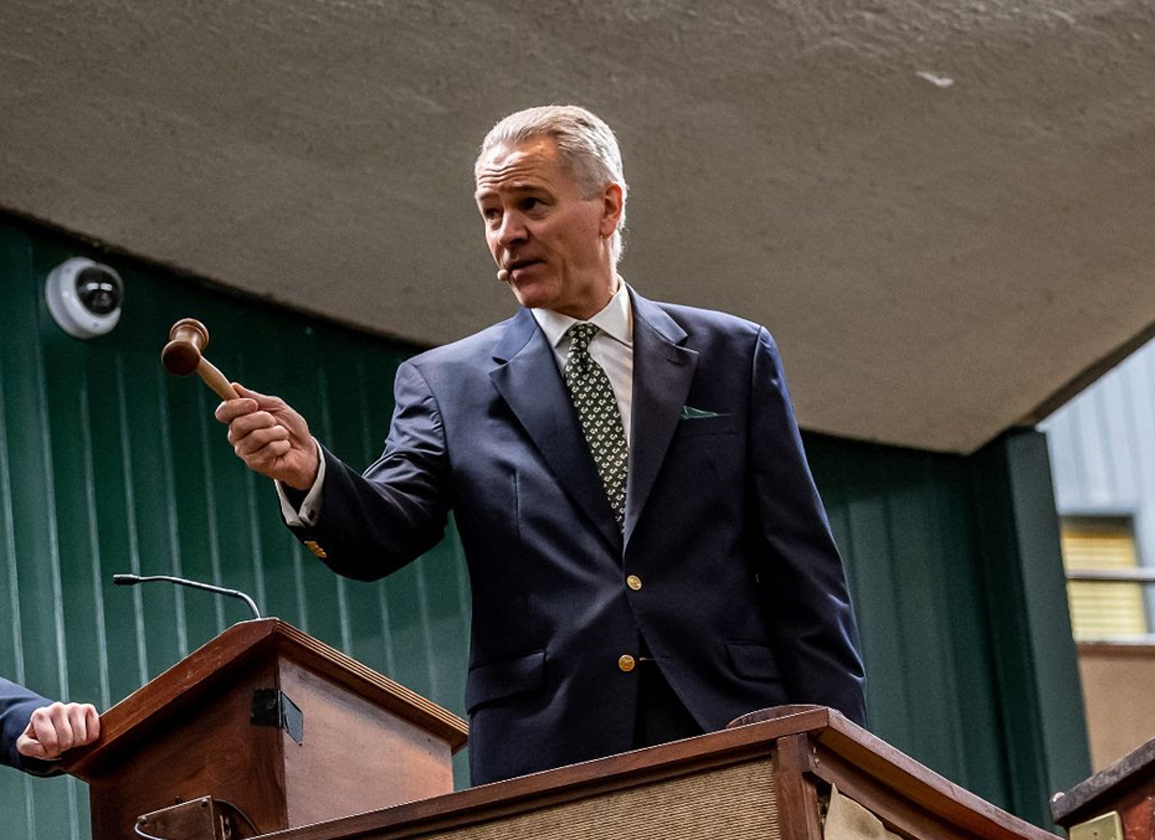 Henry Beeby: “I just love it and I can't wait for next week.” | Goffs

Tasked with identifying just one horse to look forward at the Orby Sale next week, Goffs Chief Executive Henry Beeby must have realised that he was in clover when rattling off progeny by sire sensations Dubawi (Ire), Frankel (GB) and Sea The Stars (Ire) but admitted that having the chance to offer 11 Galileos (Ire) was a particular boon ahead one of the most eagerly-anticipated yearling sales on earth.

Beeby also described himself as thrilled with the field of 2-year-olds the Goffs Million has attracted at the Curragh on Saturday and shared hopes that the race can prove a springboard for what promises to be a helter-skelter week of trading.

He said, “Having 11 Galileos in his penultimate crop is a big deal for us. Kirsten Rausing's Dubawi is gorgeous and there are some lovely yearlings by Sea The Stars as well. We've got Frankels, Kingmans (GB), Invincible Spirits (Ire), Night Of Thunders (Ire), Dark Angels (Ire), Kodiacs (GB), Siyounis (Fr)–everything you could possibly want.

“We have some really good sire profiles and deep, deep pedigrees. The brother of Saffron Beach (Ire) (New Bay {GB}), I saw him back in May and my tongue was hanging out, he's such a good-looking horse.”

Beeby added, “There are a couple of superb No Nay Nevers and the Frankels I've seen have been gorgeous as well. I've been to the Irish National Stud and I think they have a very strong draft but it's very hard to just pick out one or two horses off the top of my head because all of the big vendors have supported us well. Put it this way, everything is in place for it to be a big sale.”

Before the two-day Orby kicks off on Tuesday, there is the Goffs Million, which will be run for the first time since 2009 on Saturday and boasts a whopping €1,234,000 prize fund. Beeby has described his satisfaction with the field of 19 runners that have assembled for Saturday's seven-furlong contest and explained the reasons behind rescheduling the race.

He said, “We're delighted with the field because it has a good representation from England and Ireland which demonstrates the interest of the sale. It looks a good race with good 2-year-olds who will go on to bigger and better things. What the race has provided is a focal point. We had a rough old time of it two years ago and, when we were thinking about the sale last year, we decided we needed something that would really grab peoples' attention.

“We looked at all sorts of things, incentives and bonuses, all of which have merit, but we just felt that the Goffs Million had a real ring to it. There are 19 runners, 10 of them will get prize-money and the winner will get €617,000 as the race is worth €1,234,000 because any excess entry fee rolled straight back into the race. It's very exciting and really caught the imagination at the sale last year–which can be seen by the diversity of the trainer and owner profile of the race.”

Beeby added, “Two years ago was very hard. We have been very clear about the fact that we could have made better decisions in 2020. We have essentially appealed to Irish breeders to give us another chance and happily they did. They were quite heavily rewarded last year and, one of the key things I will always say is, we are nothing without the horses.

“We can come up with as many gimmicks or marketing campaigns as we like but, if you haven't got the raw material–which is the quality Irish thoroughbred–then you have nothing.

“As a result of the great support we got last year, we saw great trade and, because of that, the Irish breeders have given us a greater share of their best horses for this year's sale.

“Many vendors have upped their game. We have a bigger catalogue than ever and the build-up to this sale has been all about convincing the Irish breeders that they have a premier outlet in Goffs and that they don't need to go elsewhere. More and more people are happily coming around to that way of thinking.”

There is no better advertisement for a sales company than the racecourse and the Orby was once again put in lights when Eldar Eldarov (GB) (Dubawi {Ire}) stormed to St Leger glory at Doncaster.

Fellow graduate Prosperous Voyage (Ire) (Zoffany {Ire}), winner of the G1 Falmouth S. at Newmarket, has also done her bit to advertise the prowess of the sale and Beeby is all too aware that such victories are needed to maintain the Orby's reputation as a guaranteed source of top-notch talent.

He said, “People come back to the Orby Sale to buy good-looking and well-bred individuals who perform on the racetrack. Eldar Eldarov and Prosperous Voyage are obviously the most high-profile graduates this season but they are pumped out every year. The sale punches above its weight in that respect. We call it the Irish national yearling sale, because that's what it is, but it is a premier European yearling sale. It's one of the most important dates in the year, certainly in Europe, if not in the northern hemisphere breeding season. It will have the full focus of attention and we expect a pretty big buying bench to turn up.

“That's certainly the indication at the moment as hotel rooms are at a premium and we're flying people in from the United States. We have interest from the Middle East, the Far East, obviously from Ireland, Britain and Europe, so we are prepared for a really big turnout.”

And that American interest should not be underestimated. Given the strength of the dollar, it is understood that up to 60 American-based agents and buyers could be in attendance at the Orby Sale next week, which would be a record.

Add that to the fact that the demand for yearlings has been strong at the the August Sale at Arqana, the Premier Yearling Sale at Goffs UK, the Tattersalls Somerville Sale and at Tattersalls Ireland last week, Beeby is quietly optimistic of the trend continuing at Goffs.

He said, “The yearling sales have been extraordinary this year. We would be hopeful of a good trade. The American interest is higher than it has ever been, exactly what number turns up remains to be seen but the dollar being where it is a major attraction. They are looking for our kind of horses and we've got them in droves.”

Beeby added, “I've seen a lot of these horses and I would be surprised if buyers are not very impressed. For our sale, we need to have the pedigree and the conformation because there's plenty of good yearlings to come in the following weeks, and that's always been the case, so you really have to be the right article to get into the Orby.”

And with all of this excitement comes great responsibility. Beeby admits there will be butterflies in the stomach when he stands up on that rostrum at 10am on Tuesday morning for a sale that broke the €40-million mark 12 months ago but everything is in place for another record-breaking session.

He said, “From a Goffs point of view, this is the most important week of our year because the two days of the Orby Sale are our highest-grossing sales by some way. Any sale that I go to, and I mean this genuinely, I care deeply about it and want it to go well.

“For example, the Premier Sale means a lot to me and I have been working at that sale since the late 1970s, but the Orby is the one that matters most. As my late father used to say, the yearling sales are all about potential and you can see in front of you what the horse is going to look at–it's like looking at a late teenager in human terms. You can see the athlete.”

Beeby added, “The overriding emotion is anticipation, excitement and there is a certain amount of adrenaline flowing. When I get up on that rostrum, I will feel some nerves, but I think you need that. If you're an auctioneer, the whole point of doing this job is the moments leading up to when a horse walks into the ring, everything else leads towards that moment. So, stepping forward with a microphone on you, the gavel in your hand and seeing a beautifully-bred horse from a major operation with a track record of selling top-class horses walking around a ring that has seen champion after champion, that's what I live for. I just love it and I can't wait for next week.”