Help Has Arrived, But Still Grim Situation at Camarero 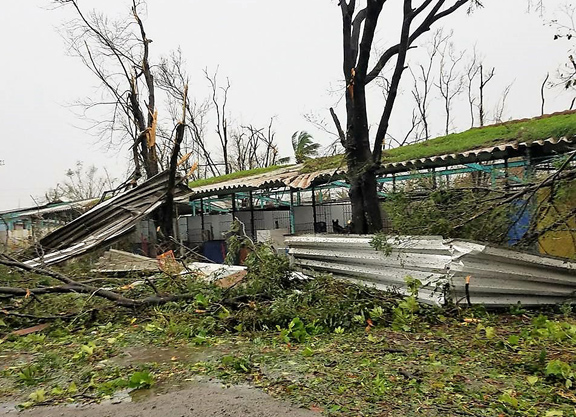 A plane carrying 20 tons of hay cubes and veterinary supplies arrived in San Juan yesterday, which will provide needed sustenance for the many horses still at Camarero Racetrack and help veterinarians and volunteers working to care for the horses.

The situation has been dire on the backstretch of Puerto Rico's lone racetrack since Hurricane Maria ravaged the island starting Sept. 21.

For some horses, however, the supplies arrived too late. According to Kelley Stobie of Carribean Thoroughbred Aftercare, three more horses at Camarero have been euthanized within the last few days, upping the number of known equine deaths at the track to 11.

“The problem is that with a lot of the cheaper claiming horses, they haven't had anybody to take care of them or they do and the people just don't care,” Stobie told the TDN from Puerto Rico. “The horses are just being left and are standing in water and horses can't handle that. They will founder.”

Stobie added that she has been telling people who come upon abandoned horses to let them out of their stalls.

“Just let them out,” she said. “At least that way I can find them and they can wander around and find some grass to eat.”

Stobie reports that the situation has improved in recent days. She said early yesterday that she expected that every horse on the backstretch would have received at least minimal care, food and water by the end of Monday afternoon. There are still about 150 horses who do not have adequate shelter because they are in barns where the roofs have been blown off.

Stobie spoke to the TDN from the San Juan airport, where she was helping unload the cargo that had just arrived from the U.S. mainland. The work done to get the supplies and feed to Puerto Rico was a team effort from a number of groups, including Thoroughbred Charities of America, the American Association of Equine Practitioners, the Jockey Club and Ranch Aid, a FEMA appointed organization that assists with logistics and care for large animals during natural disasters.

The veterinary supplies and medications en route to San Juan were donated in part by MWI Animal Health and purchased by TEVA. Delivery was assisted by south Florida veterinary practice Teigland, Franklin, and Brokken. The hay cubes were donated in part by Cargill/Nutrena and purchased by the AAEP Foundation. Additionally, two satellite phones were purchased by the AAEP Foundation and delivery assistance was provided by south Florida Purina Animal Nutrition representative Shiela Conde.

“I have to commend the industry,” said Shelley Blodgett, a member of the Caribbean Thoroughbred Aftercare team who is based in Florida. “We got this plane in and it took Erin Crady of Thoroughbred Charities of America and others moving heaven and earth to make it happen. There were so many false starts with this. It is a mini-miracle that this plane actually got in and it is a credit to people in this industry who have a lot of influence. I am grateful for what people have done. This is literally lifeblood.”

According to a press release put out yesterday by TCA, Thoroughbred owners Terry Finley and Vince Viola played a vital role in cutting through the red tape and clearing the way for the plane to arrive in Puerto Rico.

Members of the Humane Society also arrived yesterday at Camarero and will assist with the rescue efforts and assess the situation.

Blodgett said that the biggest problems have been getting hay and clean water to the horses. Many have had grain but nothing else. She added that there is still a need for shavings and several horses are standing in stalls with no bedding.

“It has been 11 days since the hurricane, so for many of these horses, with the arrival of the hay and supplies, this will be the first day that they have had any forage,” Blodgett said. “It's a lifeline for them. Some horses have had some grain but not enough forage or water, which is problematic. Having the forage will help them, help their digestive health so they don't colic or founder. Water has also been a big problem. I've been told the water available at the track was not clean. On the flip side, there are folks hauling clean water in from their own homes or wherever they can get it from for their horses.”

Blodgett said that Stobie has been working nonstop since the hurricane hit and has had little help or rest. When reached yesterday, Stobie was clearly frustrated and said Camarero management has done little to assist her.

“It's really been hard,” Stobie said. “There has been so much government crap and red tape. It's unbelievable. I cannot believe it's been almost two weeks since the storm and I am only now getting my first shipment of supplies.

“I've always worked with the racetrack, but I am very disappointed with the way they have handled the care of these horses. They have enough people that could have helped me with this and they didn't. It's not like they are making me do everything because they couldn't care less if I did anything. This is my job. I am here for the animals. I don't care about anything else. I'm here to protect them and fight for their rights.”

The phone lines remain down at Camarero, therefore the TDN was not able to seek comment from management there addressing Stobie's complaints.

Stobie said the heroes have been the grooms.

“It's the poor people, the local grooms, they have been busting their butts to help these horses.”

Camarero has issued a press release saying it expects the track will reopen shortly for training and that racing will resume there within 45 to 60 days.