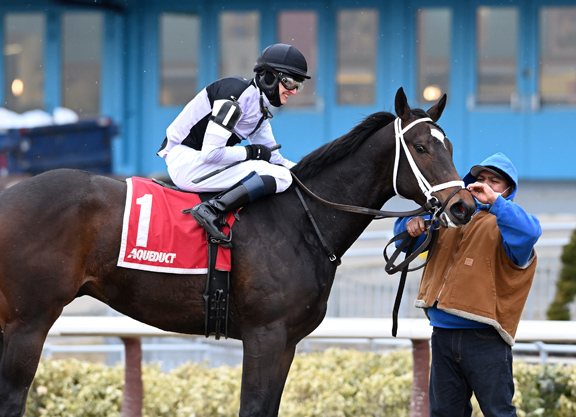 Hello Hot Rod (Mosler), fresh off a gritty score in the Jimmy Winkfield S. at Aqueduct last Sunday, will make his next appearance in the sales ring during Tuesday's second session of the Fasig-Tipton Winter Mixed Sale. The 3-year-old (hip 672), owned by Dark Horse Racing and Brittany Russell and trained by Russell, was a late supplement to the two-day auction and will be consigned by Elite.

Russell and Dark Horse Racing's Jodi Quinn already had a favorable impression of the son of Mosler before they purchased him for $10,000 at the 2019 Fasig-Tipton Midlantic October Yearling Sale. They had purchased his half-sister Hello Beautiful (Golden Lad) for $6,500 at the Midlantic December Mixed Sale the previous year.

“Hello Beautiful had just broken her maiden at the time he was being sold, but we really liked her and we knew she had some ability,” Russell said of the colt's appeal as a yearling. “He had good bone on him, he was a good-looking little horse. He had a few minor flaws that we could deal with, so it was nice we could get him bought for that price back then.”

Despite his half-sister's accomplishments, Russell kept her initial expectations for Hello Hot Rod in check.

“I think when you buy a horse like that for that kind of money, you don't have those high expectations,” Russell said. “You just hope you are going to have a useful racehorse. It's a nice price where, if they're going to be a lower level horse, you paid just $10,000. And if they are a nice horse, it's great because you only paid $10,000.”

But Russell's husband, jockey Sheldon Russell, knew early on the colt had talent.

Hello Hot Rod got his racing career off to a promising start, closing to miss by just a neck in a six-furlong waiver maiden claiming race at Laurel Oct. 30.

“You'd love to win first time, but we were kind of just trying to give him a run and he nearly got his first start won,” Russell said. “Sheldon took him back and taught him something and he came with a run and nearly won it. He probably needed that race, anyway, from a physical standpoint.”

“We sort of expected for him to come back and win the way he did,” Russell said of Hello Hot Rod's second start. “And I thought he would like the mile and he did everything right in that allowance race as well.”

Hello Hot Rod jumped up to the stakes ranks for his sophomore debut and went wire-to-wire in the seven-furlong Jimmy Winkfield S., digging in gamely in the final strides to keep his nose in front on the wire (video).

“I loved him to be fair, but you don't love the one hole going seven-eighths, so that was a concern,” Russell said of expectations going into the race. “But [jockey] Trevor [McCarthy] and the horse handled it and got the job done. It's tough in the winter, these winter tracks are hard racetracks for horses to run on and he jumped out of there and he showed some speed and he kept going. He showed he's a tough racehorse and that's what you want.”

The idea of selling the colt had been percolating for some time before the final decision to enter him in the Fasig February sale.

“I had some interest [in buying him] after he broke his maiden,” Russell said. “Actually after both of his wins, we had some interest. It's kind of the goal in the game, right? To make a $10,000 horse into a more expensive horse. This is how you make money in the game, it's a tough game.”

She continued, “We own 50% of him and it was always in the back of our minds that we might try to sell him. I'd love to keep him in the barn, naturally, but I have some friends who work with Fasig and we bounced some ideas back and forth. After he won, it just seemed like maybe a smart business move.”

While the decision to sell may be a smart business move, Russell agreed it was still an emotional one.

“Oh absolutely, I love him,” she said. “He means a lot to us. We have his sister in the barn and he's our other big horse, so to see him go will be sad. But who knows, maybe we'll end up getting him back in the barn.”

“He's very easy to train and he's sound,” Russell said. “He's not a bleeder, so moving forward with what we are dealing with with Lasix, I think that's a huge attribute. And I think he'll go farther. He's smart, he has a good mind on him. He can go or he can sit, so as the races get longer, he has options. I think that's going to be a huge thing.”

The Fasig-Tipton Winter Mixed Sale will be held next Monday and Tuesday at the company's Newtown Paddocks. Each session begins at 10 a.m.