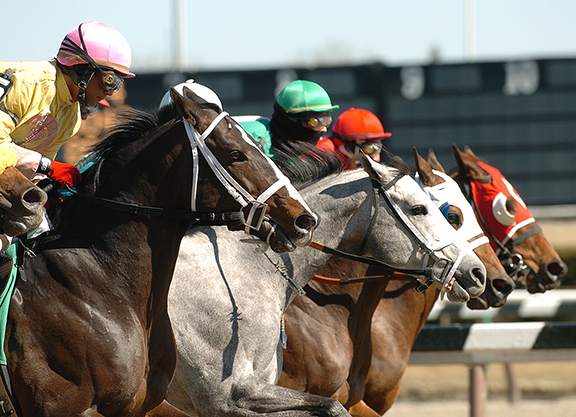 One day in the not-too-distant past, a jockey who had taken a tumble at a Mid-Atlantic racetrack was required to get a doctor's note giving him the medical all-clear before he could ride at the same facility. And so, that's what he did.

But rather than head immediately to a physician in that same state, the jockey hopped the border to ride at Laurel Park. After taking his mounts at the Maryland track, the rider swung by the office of Kelly Ryan, co-medical director for the Maryland Horsemen's Health Program.

“He said, 'I need to see the doctor because I need a note so I can get cleared to go back and ride,'” explained Ryan, who declined to name the jockey and original racetrack due to the sensitivity of the situation. “He could have been riding with a concussion and nobody knew.”

The point of this anecdote wasn't to skewer the jockey but rather to highlight a broader and rather more insidious problem: That while huge strides have been made in the arena of equine health and safety in recent years, when it comes to ensuring the health and safety of the folks steering them, the industry leaves much to be desired.

More pointedly, there's a glaring hole that needs to be filled with an easy-to-use, legally compliant and uniform system across the country to track, store, manage, and share vital information pertaining to jockey health. Which is where a system called HeadCheck Health, pioneered and developed for use between Maryland and Delaware, is seeking to act as a plug.

“This is a very important need. It's a very big need,” said Ryan, who added that for too long, the industry has been making excuses instead of fixing the problem. “We're giving them a reason to stop making excuses.”

Ryan isn't overselling the need. Roughly 45% of sports related brain injuries are related to equine sports, while 7% of falls result in concussions.

In a recently published four-year jockey injury study helmed by Ryan encompassing 590 race days and 5,611 races, there were 204 injuries involving 184 separate incidents and 131 separate falls. Out of the 22 head injuries that jockeys suffered during that time, eight were concussions, which worked out to a ratio of 0.18 concussions per 1,000 mounts.

Mix into the ingredients wildly varying concussion protocols, medical staff and medical models from track-to-track, and it soon becomes apparent why proponents of HeadCheck Health are keen to sing the system's praises. “This is going to make collecting information so much easier,” said Ryan. “It's a game-changer.”

Founded about eight years ago, HeadCheck Health works with all sorts of other sports teams like rugby, football, and hockey–some of them at the elite, Olympic-level–where the risk of concussion is ever present.

“We've gone through it and we know how to make things work,” said Eric VanderHelm, an account manager at HeadCheck Health, who has worked with Ryan and her colleagues to build a platform catering to the specific needs of horse racing.

Importantly for Health Insurance Portability and Accountability Act (HIPAA) compliance, there are various levels of access into the system that differentiates what jockeys and medical personnel–like those from the emergency medical services field, athletic trainers and medical directors–can see in the system, and what clerks of scale, stewards and other regulators are able to view.

The main dashboard provides a simple outline of which jockeys are eligible to ride, and their current health status if not. This is the sort of information anyone acting as a concussion spotter at a track has access to.

Specific health-related information, however, is locked to the jockey and medical experts. And what does this cover? Turns out, a fair bit.

There's an electronic form to input the results of a Sports Concussion Assessment Tool 5 (SCAT5) test, which is a standardized way to evaluate sports-related head injuries.

Other digital forms include an accident report, and a digital clearance note with time stamps. Jockey physical cards–typically a slip of paper riders routinely lose–can also be inputted electronically into the system.

See a more complete presentation of the system here:

The overarching purpose of the app is to streamline and centralize the collection of vital jockey health data and make important details (ranging from information pertaining to suspected or diagnosed concussions to missing physical notes) available to those who need to see it–jockeys especially, said Ryan.

Some in the industry who read this will no doubt be familiar with a similar system already in place.

The Jockey Health Information System (JHIS) was launched by The Jockey Club–and integrated into their InCompass system present at nearly all U.S. tracks–some 12 years ago.

But it would be fair to say that the JHIS hasn't been enthusiastically embraced as originally intended. Indeed, the Jockeys' Guild was able to verify only that Keeneland and Churchill Downs are currently utilizing the system.

“It hasn't gotten the support that we would have liked,” admitted Terry Meyocks, president and CEO of the Jockeys' Guild.

Complicated HIPAA laws have made implementation difficult. And while the original intent of the JHIS was for approved medical personnel to input the information, said Meyocks, the huge disparities in medical staffing levels between tracks led to the riders taking on much of that responsibility themselves–a dynamic replete with potholes associated with language and technology barriers, and good old-fashioned apathy.

Varying concussion protocols at different tracks also hindered the effectiveness of the JHIS, with some tracks still to implement them.

Indeed, the ARCI has a model rule regarding concussion protocols, requiring a track to have on-site trained personnel to diagnose and assess concussions, for example, and established return-to-ride guidelines.

But according to Jockey's Guild attorney Mindy Coleman, Maryland, Delaware, Colorado, Washington State, and Oklahoma are the only states where these model rules have been both adopted and enforced, while NYRA is working with New York Institute of Technology to adopt concussion protocols as a house rule.

“If everybody's serous about concussions, which I think they should be if they're worried about liability, I think it would be in the industry's best interest to come up with something, whether it's through InCompass or HeadCheck,” said Meyocks.

HeadCheck Health–a much more sophisticated and dynamic tool than the JHIS, say its proponents–isn't yet the finished article, with technical wrinkles still being ironed out.

Nevertheless, the individuals behind it are now looking to start expanding the system beyond the Maryland and Delaware borders.

As they do, they, too, face some of the same issues that hampered the rollout of the JHIS, namely the Swiss cheese distribution of trained medical staff across the nation's tracks. But HeadCheck Health has the potential to circumvent some of these barriers.

For one thing, it opens the door to things like baseline concussion testing via telehealth consultations, meaning that a trained physician could perform a virtual assessment on a jockey in a completely different state (provided that physician is licensed in the rider's state, explained Ryan).

Importantly the software can be tailored to the individual needs of a track or jurisdiction, said VanderHelm. “It's a matter of them telling us what they need to have in the system to make sure it's compliant, but we can tweak it to make it work.”

Ryan sees other uses for HeadCheck Health. With a centralized database detailing falls and injuries, for example, it could also be used to run important data, potentially identifying trends to make tracks safer, she said.

Proponents of the system also downplay the costs. “It's really not very expensive–I haven't faced any pushback on the financial investment,” said Andy Belfiore, project manager with Thoroughbred Horsemen's Association. “I think people are more concerned about personnel, who's responsible for entering the medical information.”

In other words, for the system to work as effectively as it could and should, it needs buy-in from all stakeholders. “The heart of doing that is going to be up-front,” said Belfiore. “Once you've got those jockeys entered into the system, it becomes a much easier task for everyone.”

Which is why some industry figures are looking at the recently inked Horseracing Integrity and Safety Act (HISA) as a potential compliance vehicle for HeadCheck Health that's broad-based and enforceable.

“The HeadCheck Health program developed through Dr. Ryan's leadership in Maryland represents the ongoing effort to prioritize health and safety for horse and rider. 1/ST RACING has led nationwide reforms and is pleased that our industry is moving towards uniform regulations,” wrote Steve Koch, The Stronach Group's senior vice president of racing, in a statement.

“As we look to the future, it is reasonable to anticipate that that HISA would use a program like HeadCheck Health, that focuses on head health for jockeys, as a foundation for establishing and expanding a program of this nature across U.S. racing jurisdictions.”

Note: The Association of Racing Commissioners International is hosting a briefing on the HeadCheck Health system Monday, Mar. 15 at 1 p.m. ET. Register for the briefing here.