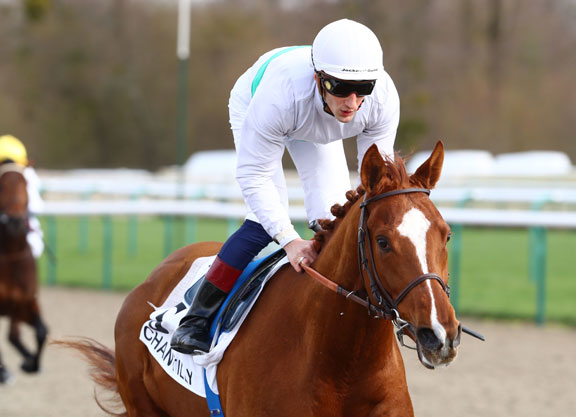 Exciting filly Khayzaraan (GB) (Kingman {GB}) could reappear at ParisLongchamp on May 11 if racing in France gets the go-ahead to resume on that date. France Galop announced on Wednesday evening that plans were in place for a resumption of the sport behind closed doors next month, subject to the necessary Government clearance. Should that be the case, Freddy Head has the option of taking in the G3 Prix de la Grotte with the Sheikh Hamdan-owned daughter of Kingman, before hopefully heading back to Paris for the G1 Poule d'Essai des Pouliches (French 1000 Guineas).

The Chantilly-based handler said, “Khayzaraan might run on the first day, the 11th, they plan to run the Group 3 prep race for the French 1000, so maybe we will go there. I don't know yet, I haven't made up my mind. The idea is to go to the French 1000. She was very impressive last year, but all the family had a lot of speed and didn't stay, so I don't know yet. Her sister was very fast and was a sprinter, so I don't know if she will get a mile. We'll see.”

At the other end of the stamina and age scale to Khayzaraan is stablemate Call The Wind (GB) (Frankel {GB}), who was last seen winning the Longines Turf H. over a mile and seven furlongs at the inaugural Saudi Cup meeting in Riyadh in February. Head reported the 6-year-old, who runs in the colours of George Strawbridge, to be back at his yard after being in Dubai for what would have been a run in the G2 Dubai Gold Cup.

Head said, “Call The Wind is very well. He came back from Dubai, he's had a lot of trips this year with Riyadh and Dubai, but he's very well. I'm going to run him in a Group 3 in May over 3000 metres. He is a stayer, he wants a distance so we'll go for all those staying races and see about the Gold Cup [at Royal Ascot]. If there is a Gold Cup this year, we don't know.”

Head is also looking forward to a fruitful campaign for the once-raced 'TDN Rising Star' Another Sky (Fr) (Le Havre {Ire}), who created quite an impression on the all-weather at Chantilly last month.

He said of the half-brother to Almanzor, “Another Sky is another horse in the George Strawbridge colours and is a horse I like a lot. He won first time out in March and won very easily. He is a nice horse, I think. We'll run somewhere and then afterwards go up in group races and see if he is good enough to run in a Derby or something like that.”

“I've been very lucky, I've had all my people and been able to work as usual and train the horses as usual, so things are not too bad,” he said of the coronavirus lockdown. “We hope to run in France on May 11, so we will see.”