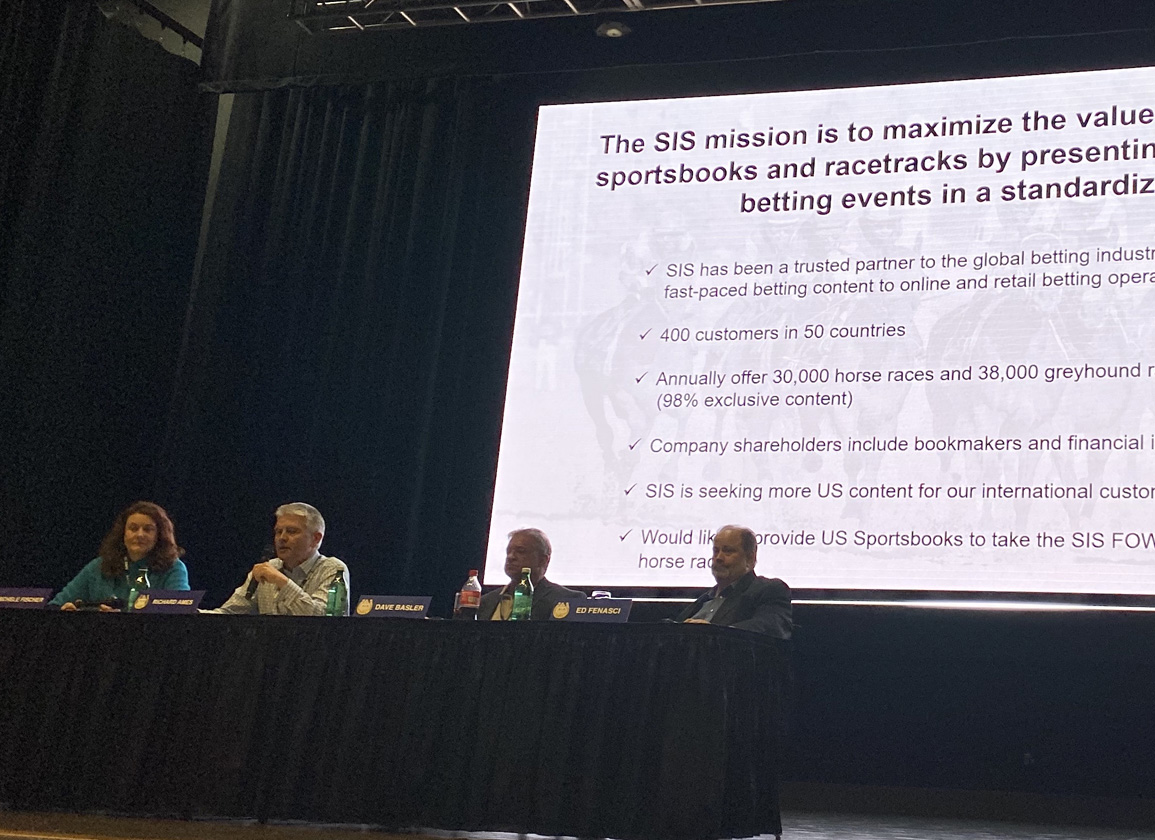 “We can fill that void a lot of times during the day so that they don't have to play table tennis from China or cricket from Australia–things that people have no idea about,” Basler, the executive director of the Ohio HBPA, said Thursday during a morning session of the National HBPA Conference at Oaklawn Racing Casino Resort. “That's not just attractive to sports books, that's attractive to horsemen and racetracks for the opportunity to increase our revenue.”

Eric Hamelback, CEO of the National Horsemen's Benevolent & Protective Association, at the 2018 conference cautioned horsemen that sports wagering was coming and the racing industry needed to be prepared. Shortly thereafter, the U.S. Supreme Court struct down the ban on sports wagering. Thirty states now have passed such legislation, including Arkansas.

Now, he says the U.S. racing industry must turn its attention to implementing fixed odds. That's a divergence from the pari-mutuel industry that currently is the linchpin of American horse racing, while sports betting is based on fixed odds that allow players to lock into a price in advance of an event.

“It's here, it's on us,” Hamelback said. “Now we need to really move and pivot and focus on how to deal with it.”

“Pari-mutuel wagering is not going to be in the sports books,” Basler said. “Fixed-odds wagering will be. So we need to take advantage of that ability to bring in customers and get our product in front of millions and millions of potential new fans.”

Fenasci said sports books have the ability to be more creative than pari-mutuel wagering, including with parlay bets.

“This is the future of horse-race wagering in the United States. Not this year, five years from now. This model of sports book wagering has competed very well with other forms of gaming. The parimutuel model has been eroding over the last 30 years. It's not standing the test of time when other forms of gaming come in and capture the attention of the customer base.”

Fenasci said the apps for betting online with sports books is “the type of interaction that is going to appeal to 20- and 30-year olds…We want shelf space on these new e-commerce sites. We want horse racing to be there prominently displayed for people who may not have had the opportunity in the past to consume that product.”

“There's a graded-stakes race with six horses and a 3-5 shot in there,” he said. “There's a good chance the bookmaker will take the 3-5 shot out of the pool entirely and price everybody else as if that horse weren't in the race. There are a lot of things that we don't have the ability in parimutuel pools that fixed odds can offer and perhaps enhance our product.”

Former Ladbrokes executive Richard Ames is CEO of British-based Sports Information Services and president of its U.S. subsidiary SIS Content Services Inc., both of which provide content and production services to the betting industry. He said Australian racing went from being overwhelmingly parimutuel to a decade later seeing “probably 55, 60 percent” of wagering through fixed odds.

“We know consumers like the idea if they place a bet at 6-1, that's what they're going to get,” he said.

Panel moderator Michele Fischer, an industry consultant who spent years working for the tote-betting company Sportech Racing and now serves as vice president of SIS' American operation, said some horsemen are surprised to hear that U.S. races already are being distributed in overseas sports books. While the Stronach Group-owned GWS is the largest exporter of U.S. content, she said SIS is the world's largest horse-racing content distributor in the world. It is fairly new to the American market, however.

“The sports book wants to have a volume of content,” Ames said. “They want to have access to thousands of races.”

He said there are different models on how racetracks and horsemen are compensated for having their races in sports books, including a fixed fee, revenue-sharing or getting a percentage of betting proceeds.

“Why should we consider this?” Fischer asked rhetorically. “Horse racing had a fabulous year in terms of handle in 2021, the highest it had been since 2009. In some states, we have a false comfort. Purses are very high–you look at Kentucky with HHR (historical horse racing) booming there. It's doing well in Virginia. But when you look at the big picture across the United States, the simple answer is horse racing is not self-sufficient. We're using alternative gaming to support our purses.

“This is an opportunity to become more self-sufficient, because we're betting on horse racing–not betting on a VLT machine or HHR machine.”

Rees is a horse-racing communications specialist in the horse-racing industry, including working for the National and Kentucky HBPA.