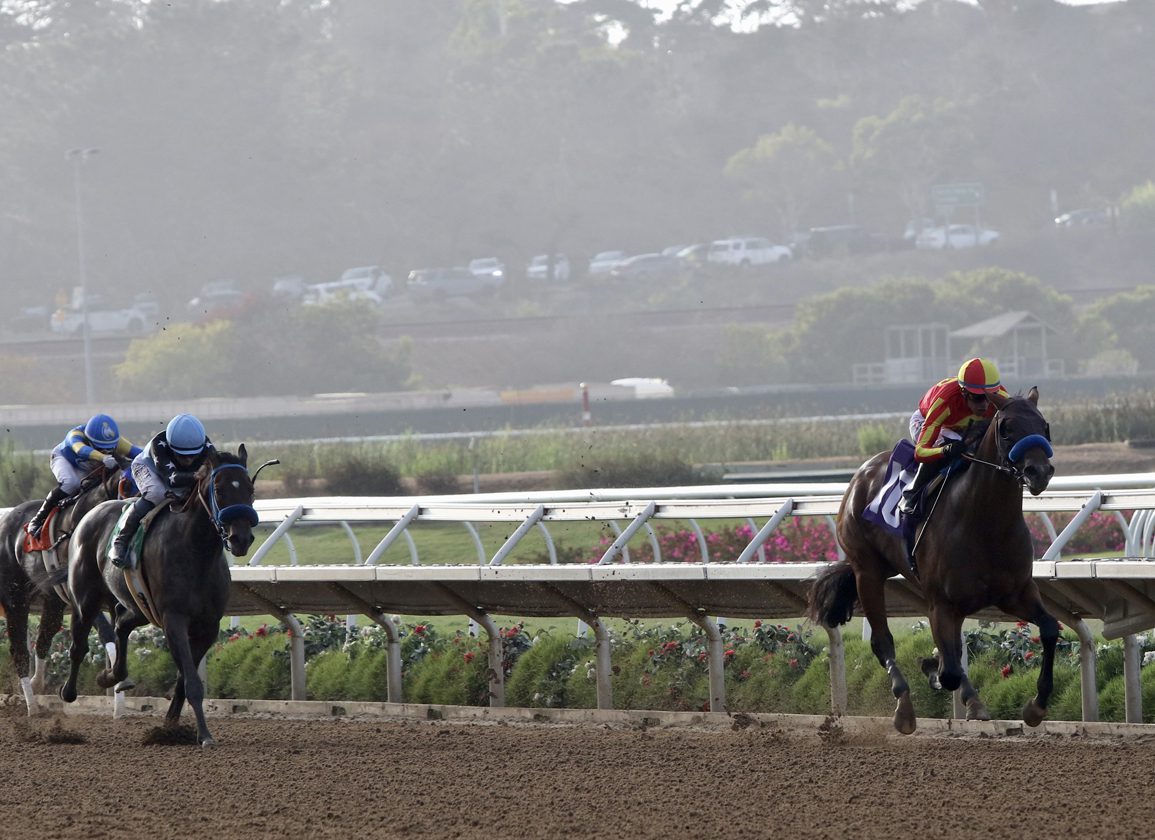 Havnameltdown runs away in the Best Pal | Horsephotos

Sent off the 1-2 chalk on the strength of a 2 1/4-length debut victory going five furlongs July 24, Mike Pegram, Karl Watson & Paul Weitman's Havnameltdown (Uncaptured) was made to work for it, but in the end proved too classy for his rivals in Sunday's GIII Best Pal S., coming away late to take it by open lengths.

Drawn widest of all, the $16,000 OBS October Yearling turned $200,000 OBS April breezer (:9 4/5) pinged the stalls and showed good early speed to get down into the three path, where he cut the opening quarter-mile in a sharp :21.74 despite having to do some work. Maintaining a narrow advantage into the turn, the Florida-bred raced in the two path and faced a fresh challenge from $400,000 OBS March graduate  Agency (Bolt d'Oro), who rolled up three wide, looking every bit poised to capitalize on the favorite's early exertions. The latter got to within about a half-length with three-sixteenths of a mile to travel, but Havnameltdown had something in the locker and kicked home about 2 1/2 lengths to the good. Longshot Man Child (Creative Cause) rounded out the trifecta. Havnameltdown was providing trainer Bob Baffert with a record-extending ninth Best Pal, but first since Klimt (Quality Road) in 2016. The same ownership group won the 2009 Best Pal with future champion 2- and 3-year-old male Lookin At Lucky (Smart Strike).

“I was outside and my plan was to stay second or third, but he was real aggressive out of the gate,” said winning rider Juan Hernandez. “He wanted to go to the front so I just let him run and do his thing. At the quarter pole he was getting kind of lazy so I woke him up a bit and he picked it up really well and got to the wire.”

Havnameltdown is the 11th stakes winner and sixth graded winner for Uncaptured, who was sold by Ocala Stud to South Korea to continue his stud career in late 2019 and covered a total of 137 mares in his first two seasons there, including 92 in 2020. The 12-year-old is a son of Lion Heart, whose record as a sire of sires–particularly in Florida–is well documented, as his son Kantharos achieved great success before being moved to Hill 'n' Dale. The latter's son Bucchero is off to a promising start at Pleasant Acres Stallions. Produced by a half-sister to three full black-type winners and to the dam of 2020 GIII Selene S. winner Two Sixty (Uncaptured), Havnameltdown has a yearling half-sister by Tapiture. Ashley's Babe was barren to both World of Trouble and Maximus Mischief for 2022 and was most recently bred to the latter.