Have You Taken the Breeders' Cup Aftercare Pledge? 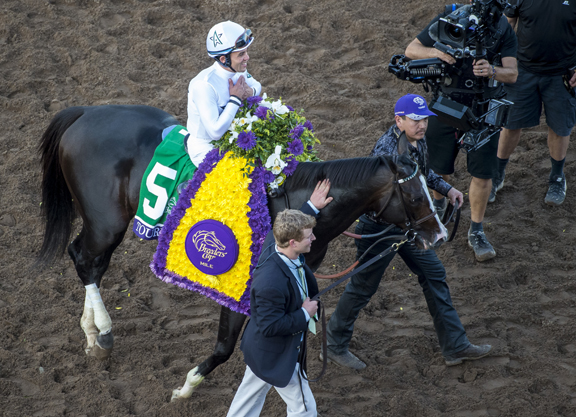 Effective equine-care fundraisers have three things in common: 1) Ease of donor participation; 2) A donation model in which 100% of the proceeds benefits the charity; 3) A shared, excitement-based communal rooting interest among all participants.

Now it's up to owners and trainers who have horses aiming for the world championship races at Del Mar Nov. 3 and 4 to step up and accept the ninth annual Breeders' Cup pledge.

Here's how it works: Owners and trainers of Breeders' Cup entrants voluntarily pledge in advance to donate a portion of the purse earnings of their horse(s) to New Vocations. Donors declare the amount as a percentage point of their own choosing, generally from one-half of 1% to 10%. This strategy in past pledge drives has netted New Vocations anywhere from $40,000 to $120,000 during the course of each year's two-day Breeders' Cup event.

“It's my favorite fundraiser because 100% of the proceeds go to the New Vocations program,” said Anna Ford, the Thoroughbred program director for New Vocations. “There's no overhead to it, because there's no big event that we have to put on. The Breeders' Cup puts on the event. We get the pledges and the commitments, and then we just sit back and see how the horses do–they're the show.”

Last year's windfall might be difficult to top, but that won't stop Ford and her team of volunteers from trying: The 2016 Breeders' Cup resulted in two winning horses whose owners had taken the New Vocations pledge.

“Normally, we're lucky if we get one winner, but last year was a really exciting year, with Classic Empire (Pioneerof the Nile) pledged by owners John and Debby Oxley and Tourist (Tiznow) pledged by owners WinStar Farm, Wachtel Stable, and Gary Barber,” Ford said. “We always hope that we're going to have winners, but we have had years where we don't and are fortunate just to have some horses hit the board. But it really makes a difference to us when they do win, so that was huge.”

“We're just starting to talk to people, those who've pledged in the past, while also reaching out to new people to educate them about what the pledge is about,” said Ford. “As you know, in horse racing people can be a little superstitious, not wanting to commit to the pledge until they know they're in the race. They sometimes like to pre-enter first, and once the pre-entries are in then we see a flurry of activity.”

New Vocations was founded in 1992 by Ford's mother, Dot Morgan, as both a kindness to retiring Thoroughbreds and Standardbreds and as a convenience for those industries, which at that point had no established national placement organizations to assist with re-homing and retraining.

New Vocations has since blossomed into a network of multi-state stabling and retraining centers in Lexington, Kentucky; Hummelstown, Pennsylvania, and in both Laurelville and Marysville, Ohio. A new location, in Ballston Spa, New York, (not too far from Saratoga Race Course) just opened last year.

Ford said New Vocations can house a maximum of 140 retired Thoroughbreds and Standardbreds at a time. About 90% of horses are able to be re-homed as “riding sound,” she said, most within 60 days of being retrained.

“When we started New Vocations, the word 'aftercare' didn't even exist in the industry,” Ford said. “It's only been in the last five to seven years where the industry has really taken a turn and focused on the importance of aftercare. Owners and trainers are also realizing more about their responsibility to make sure that when their horses are retired, they get into the right situation.

“There's definitely been a huge raise in the awareness that everyone does need to do their part. It was a slow process up to about 10 years ago, but the last 10 years we've seen great change in the right direction. So the need [for accredited aftercare facilities] is definitely rising because more people want to make sure their horses are placed in a proper organization where they know that the horses are going to be transitioned properly [into post-racing careers].”

When a horse is accepted into New Vocations, Ford said the first step is a thorough physical evaluation, which leads to a plan for rehab. The rehab phase can last anywhere from 30 days up to a year before horses move over to the training side of the barn, where they learn second-career basics like walk/trot/canter, and, if able, small jumps to test for potential sport horse ability.

Prospective adoptive owners must pass an extensive application and background check that screens for horsemanship experience and the financial ability to care long-term for a retired racer. New Vocations follows re-homed horses closely, requiring updates from new owners, which are then passed along to the previous owners who donated the horses into the program.

“Since we've expanded with our Lexington facility, which we've been doing over the past two years, we've actually increased our intake, and we are on track to take in over 500 horses this year, and our adoptions will be close to 400 this year,” Ford said.

Ford underscored that one generous (and sporting) aspect about a number of the owners and trainers who pledge donations is that even if their horses don't bring home substantial purse earnings in a Breeders' Cup race, some of them still honor the pledge anyway.

“If they don't win or hit the board, they don't have to send a pledge,” Ford said. “But we've had people still follow through and send us a check even when their horse doesn't run well enough to hit the board.”