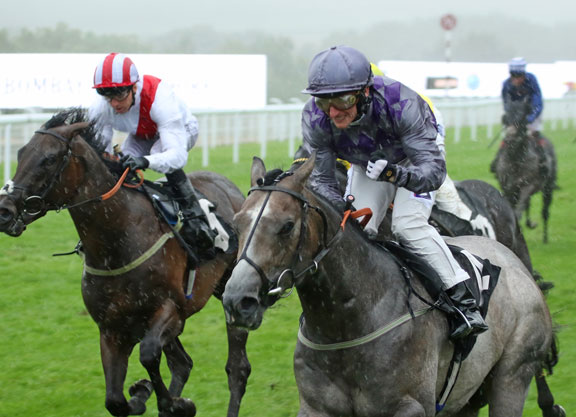 Having provided Havana Gold with his first black-type winner in the May 25 Listed National S. at Sandown, Havana Grey went one better and gave Tweenhills Farm and Stud’s resident his first pattern-race success as he took full advantage of the rain-enforced absence of Happy Like a Fool (Distorted Humor) and Battle of Jericho (War Front). Only 10th in the G2 Norfolk S. at Royal Ascot June 22, the grey had returned to Sandown to garner the Listed Dragon S. also at this trip July 7 but like most of his rivals was facing a new examination here on his first outing on ground worse than good-to-firm. Soon in front as his superior natural pace bagged him the all-important rail, he stretched away from Invincible Army inside the final furlong for a straightforward success.

Jockey PJ McDonald commented, “For some reason, he has started getting a bit fractious in the gates on his last few starts and missed it half a beat again today so I had to put him on his head for the first 100 yards. He became a bit unbalanced, but once levelled out he was never going to get caught. He was tough to do what he did today and it shows what a good horse he is to do it on different types of ground. I think he’s still improving and he can compete at the top level.” Trainer Karl Burke, who also took the G2 Prix Robert Papin with Unfortunately (Ire) (Society Rock {Ire}) last month, was surprised at how well the winner dealt with conditions. “I was a bit concerned about how he would handle that ground–it was beautiful when I walked it this morning and I couldn’t believe how fast it was, but there is still a lovely strip on that rail and I was adamant that [jockey] PJ [McDonald] get on that,” he commented. “Once he got into his rhythm he’s done it well. He’s in the [G1 Prix] Morny [at Deauville Aug. 20], which closed this morning and the owners have always been very keen to go for that.” Unfortunately, I also have to run Unfortunately in it too–I’d rather not run them both, but both horses deserve to go for a group one.”