Haspel On Trail Of Success 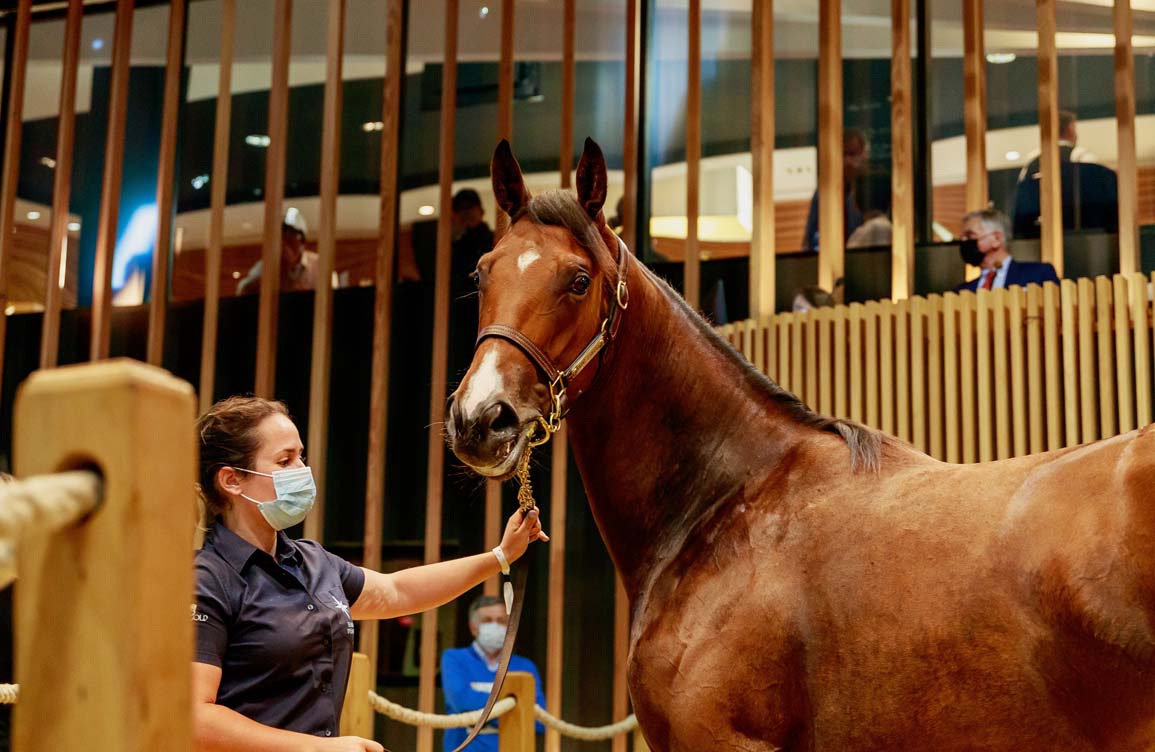 DEAUVILLE, France–There were tears of delight from breeder Jose Delmotte and his friend and agent Marc-Antoine Berghgracht following the sale of Delmotte's Kingman (GB) filly (lot 62) for a session-leading €950,000 on Saturday evening at Arqana.

From the Juddmonte family of young sire Calyx (GB), the filly's dam Needleleaf (GB) (Observatory {GB}) was bought as an unraced 2-year-old from the Juddmonte draft at Tattersalls December Sale by Berghgracht six years ago for 60,000gns. The sister to Group 1-winning sprinter African Rose (GB) has already hit the big time with her second foal, Native Trail (GB) (Oasis Dream {GB}), who provided a welcome update to an already strong catalogue page last month by winning the G2 Superlative S. for Godolphin. It was that same outfit that came calling for the statuesque yearling, whose breeding so closely resembles that of G2 Coventry S. winner Calyx, who is by the same sire and is out of another full-sister to Needleleaf, the Group 3 winner Helleborine (GB).

Delmotte, who owns Haras d'Haspel in Normandy and offered just one yearling during the select part of the August Sale, said, “It's a great sale. I heard all the wonderful compliments people were paying her, that she was exceptional, fabulous.”

He added, “Marc-Antoine has always tried to push me in the right direction to try and improve the quality of our mares. And whoever you speak to in the world of bloodstock, they always tell you that the model breeding operation is Juddmonte. So whenever we are at a sale [in Newmarket] we always look to see what they have that corresponds to our needs that might be somewhere near our budget.”

Delmotte sold Native Trail as a foal at the Arqana December Sale for €50,000 and he eventually found his way into Charlie Appleby's stable after being offered as a breezer by Norman Williamson of Oak Tree Farm at the Craven Sale in April.

The breeder continued, “With her brother he was already very big, which is why we sold him as a foal because we were worried that later on he would be the size of a hunter. Of course he ended up eventually being bought by Godolphin and that has worked out very well. It's a wonderful story and it is a story of friendship with Marc-Antoine.”

The agent himself was at first too overcome to speak, but after hugging Delmotte, he added, “It's very emotional because in this profession you have to be able to take the rough with the smooth and Jose has known plenty of setbacks. But now he has this wonderful mare producing these excellent horses, and he also has the sister of St Mark's Basilica (Fr) on his farm as well.”

Berghgracht continued, “It's all about teamwork and he and the team at Haras d'Haspel really deserve this. You never know with horses. He had a filly by Siyouni who knocked herself in her box on Thursday and had to be withdrawn. It can happen at any time. Now he is in the fortunate position of having this wonderful mare who is from a great operation and who is still young. Who knows where she could lead?”

An early echo of last year's €2.5 million sale-topper was provided when lot 17 was knocked down at €750,000 an hour into the Arqana August Yearling Sale.

Vendor, buyer and sire were all repeated when Oliver St Lawrence and Fawzi Nass plumped for a Dubawi (Ire) yearling sold by Ecurie des Monceaux. This one was a colt, however, and the dark bay is the second foal of the LNJ Foxwoods homebred G3 Prix Minerve winner Golden Valentine (Fr) (Dalakhani {Ire}), herself out of a half-sister to the Wertheimer brothers' celebrated Goldikova (Ire).

“This lovely Dubawi colt caught our eye at an early stage and the owner was keen to buy him,” said St Lawrence, who confirmed that he will race for the Saudi-based KHK Racing, which part-owns last year's sale-topper, a half-sister to Arc winner Sottsass (Fr) who has been named Pure Dignity (GB).

“He will be trained in the UK,” the agent added.

Bred in partnership by Monceaux and LNJ Foxwoods, the colt is a grandson of the G3 Prix Cleopatre winner Gold Round (Ire), who was bought from the Wertheimer draft carrying Golden Valentine in the same ring in 2012 for €520,000 by Alex Solis. Golden Valentine's first foal is a Galileo (Ire) colt named Shadowfax (GB) who sold for €450,000 at last year's Select Sale and is now in training with John and Thady Gosden in Newmarket under the ownership of Qatar Racing and LNJ Foxwoods.

St Lawrence had his bidding boots on early and also claimed the first Roaring Lion yearling to pass through the ring in Europe for €140,000. Lot 4 was offered by Haras d'Etreham and is out of the Pivotal (GB) mare Every Time (GB) from the immediate family of G1 Moyglare Stud S winner Cursory Glance (Distorted Humour) and Digital Age (Ire) (Invincible Spirit {Ire}), a Grade I winner on the American turf for Chad Brown.

Ecurie des Monceaux, which ended the session as leading vendor by aggregate with 15 sold for €3,357,000, was also responsible for the third-top lot of the session, a filly by the late champion sire Galileo (Ire) out of the listed-placed Johannesburg mare Militante (Ire).

“They've stopped making Galileos and he has been such a world-changing sire,” lamented David Redvers after signing for the chestnut half-sister to the G3 Prix de Lieurey winner Wind Chimes (GB) (Mastercraftsman {Ire}) at €600,000.

He added of lot 56, who was bought for Qatar Racing, “She is strong and correct–everything we want in a filly to add to our broodmare band–and I thought she was good value at that price. She has come off the best farm in France and she will remain in France to be trained.”

From Trotting To Galloping

Florent Fonteyne of Trotting Bloodstock had a productive five minutes when buying consecutive lots from the Haras de Colleville draft for €220,000 and €380,000. The fillies are both daughters of the young Colleville resident and leading sophomore sire Galiway (GB), with the latter, lot 31, being a full-sister to the G1 Prix Jean-Luc Lagaradere winner and this season's G1 Prix du Jockey Club runner-up Sealiway (Fr).

“We were very keen to buy from France's leading breeder Guy Pariente and it is possible he may keep a share in the fillies,” said the young agent, who noted that he was acting on behalf of owners Thomas Lines and Ronan Kerdraon, who race as SARL Groupe KR and have 12 horses in training. The partnership began its involvement in Thoroughbred racing just two years ago, having had a previous involvement in trotting.

He added, “The clients have sent mares to Galiway and are fans of the stallion.”

Sealiway's sister has already been named Seagala (Fr) by her breeder and she is a daughter of the listed Prix Herod winner Kensea (Fr), who is by Galiway's stud-mate Kendargent (Fr).

She followed into the ring a filly bred on exactly the same Galiway-Kendargent cross who is also a sister to group winner and out of a group-winning mare. In the case of lot 30, she is a sibling to another smart juvenile in Kenway (Fr), winner of the G3 Prix La Rochette, and a daughter of the G3 Prix Eclipse winner Kendam (Fr), who was also third in the G1 Prix de la Foret. If a formula works, why not repeat it?

Anthony Stroud and David Loder, in Deauville on behalf of Sheikh Mohammed and in the company of trainer Charlie Appleby, were the leading buyers in the name of Godolphin with three yearlings bought for €1,500,000. The majority of that tally was accounted for by the day's top lot, but they also signed for lot 68, a Lope De Vega colt bred and consigned by Ballylinch Stud.

The chestnut, bought for €350,000, is the first foal of Normandel (Fr) (Le Havre {Ire}), who won a listed race in the colours of her breeder Gerard Augustin-Normand when trained by Pia Brandt and later won the G3 Park Express S. for Ballylinch and Jim Bolger.

The colt was one of two by Lope De Vega bought by Godolphin on Saturday, along with lot 10, another first foal, this one out of dual winner Front Contender (Ire) (Teofilo {Ire}) and bought for €200,000 from La Motteraye Consignment.