Haskell Shifted to Saturday, Moved Up a Week 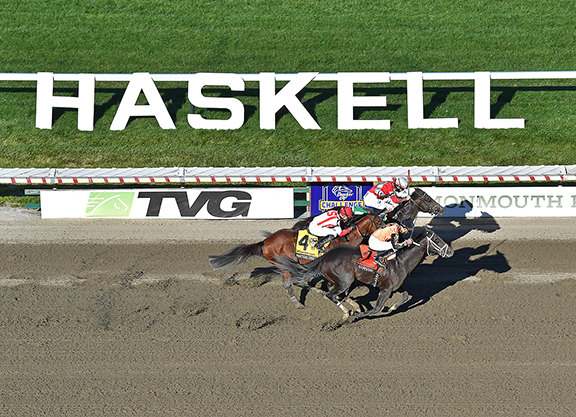 Traditionally run seven weeks after the GI Belmont S. and four weeks prior to the GI Travers S., the 2019 GI Haskell Invitational will be run July 20. The change was made because Monmouth officials were informed that, if the race were run on its normal date, it could not televised on the NBC family of networks.

To ensure television coverage, the race had to be moved to the July 20 date, which is a Saturday. The Haskell has traditionally been run on a Sunday.

The story was first reported by the Asbury Park Press.

“If we wanted to retain national television coverage for the race, we had no other choice,” said Dennis Drazin, who heads the management group that operates the track. “We either had to move the race or lose coverage. This is a our signature race and it’s a world-class race. This is not a race that we wanted to be unavailable on a national network. I don’t know this for sure, but had we gone without the TV coverage, we were worried that the Haskell might also lose its status as a ‘Win-and-You’re-In’ race for the Breeders’ Cup.”

In addition to having a $1-million purse, the Haskell has normally attracted many of the top 3-year-olds in training because of its spot on the calendar. It was far enough removed from the Belmont, that most trainers of Triple Crown starters had their horse ready to go for their summer-fall campaigns by the time the Haskell rolled around. There was also enough spacing between the Haskell and the Travers that trainers were usually open to the idea of running in both races.

It’s unclear how the change in dates will affect the type of field the Haskell gets. The worry is that, if trainers feel that they need more time for their horses to recover from the Triple Crown races, they might instead chose the GII Jim Dandy S. at Saratoga. That race will remain seven weeks after the Belmont.

“This could be a double-edged sword,” Drazin said. “For people who want to run in the Travers, they’ll now have more time between races if they go in the Haskell. But I understand we’re cutting it close when it comes to where the race is positioned as far as the Belmont goes. We might lose a horse or two where they want more time after the Belmont and gain a horse or two that likes the idea of the five-week gap between the Haskell and the Travers. We had to weigh these options and we decided in the end that it was critical to retain TV coverage.”

There could be more changes at the 2019 Monmouth meet as it appears that an influx of at least $10 million will be added to the purse account. There is legislation pending in the state capital of Trenton that would provide the Thoroughbred and Standardbred industries with an annual subsidy of $20 million to boost purses. Half the money would go to Monmouth and the other half to the Standardbreds at the Meadowlands. Though the legislation has several more hurdles to clear, it is supported by virtually every major politician in the state and is expected to pass.

Monmouth should also have additional money for purses from its cut of sports betting revenue. Drazin said it’s too early to tell how much money that may involve.

With more money available for purses, management is weighing two options. One is to raise purses across the board for the entire meet. The other is to use the money for a two-to-three week period around the Haskell to have a championship-type meet within the regular meet. If that were to happen, Drazin said purses during that period would be about $500,000 a day.