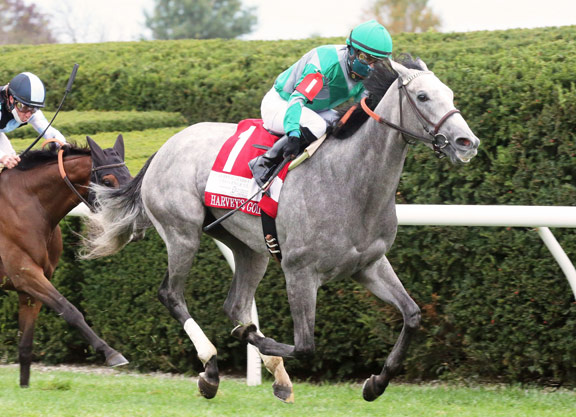 Versatile Harvey's Lil Goil (American Pharoah) turned the tables on Micheline (Bernardini)–who defeated her by a neck last time in the Dueling Grounds Oaks at Kentucky Downs–to become the first Grade I winner for Triple Crown-winning sire American Pharoah in Saturday's GI Queen Elizabeth II Challenge Cup S. at Keeneland. Off at 7-2 bidding to become Hall of Famer Bill Mott's second winner in this prestigious event, the grey employed her good cruising speed to chase Sweet Melania (American Pharoah) through honest enough fractions of :23.89, :47.75 and 1:12.16. She poked a head in front midway around the turn for home, kicked clear in midstretch and held off the cavalry charge to prevail.

“She has a lot of natural speed,” said winning rider Martin Garcia. “She's fast–you can do whatever you want. After the break, I moved outside and she was really comfortable by herself. When it was time to go, I asked and she responded.”

Mott's assistant Kenny McCarthy added, “We were pretty confident with her. She ran a super race for us at Kentucky Downs in her last out and had trained really well in between. She's a little superstar. She pretty much goes on any surface for us. At least in my mind, I think the turf probably is a little bit easier for her to handle.”

A six-length, second-out graduate going turf to dirt at Aqueduct in December, Harvey's Lil Goil turned heads when making a big turn move en route to a dominant victory in Aqueduct's Feb. 2 Busanda S. over nine panels on the dirt. She was 11th in the GIII Fantasy S. at Oaklawn behind heavy hitters Swiss Skydiver (Daredevil), Venetian Harbor (Munnings) and Shedaresthedevil (Daredevil), but bounced back to narrowly annex the GIII Regret S. on the Churchill turf going this same distance. Third behind Swiss Skydiver in the 10-panel GI Alabama S. on the Spa main track Aug. 15, she led late in the uphill Kentucky Downs stretch Sept. 10 only to be run down in the waning stages.

Pedigree Notes:
Harvey's Lil Goil is from a family developed by her breeder, the late Harvey A. Clarke. Her dam, the unraced Gloria S., is a half-sister to the Clarke-bred champion I'll Have Another (Flower Alley), best known as the winner of the 2012 GI Kentucky Derby and GI Preakness S. Clarke also bred the same family's Golden Award (Medaglia d'Oro), a dual graded stakes winner last year. Gloria S. produced fillies by Cairo Prince the last two breeding seasons and most recently visited Twirling Candy. Harvey's Lil Goil is one of 11 black-type winners (seven graded) for American Pharoah. She is the fourth of what figures to be many more Grade I/Group 1 winners out of Tapit mares.