Harvey Wallbanger and the Post-Race Recap 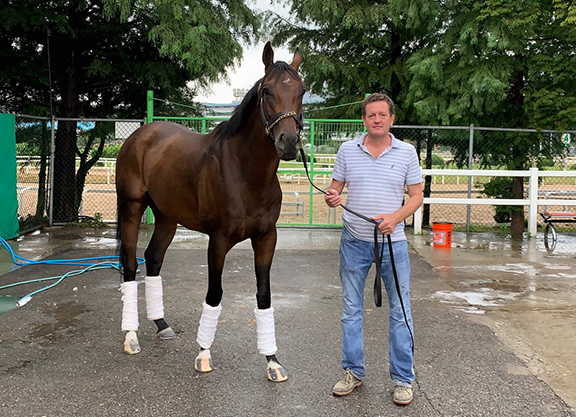 Editor's note: Patrick Gilligan, an assistant trainer to Kenny McPeek who accompanied Harvey Wallbanger (Congrats) to the Keeneland Korea Cup, has been writing a travelogue for the TDN this week, detailing his adventures in Seoul, South. Sunday, he watched as their horse ran sixth in the event.

The writing was on the wall after the Keeneland Korea Sprint. There were three North American runners. They never figured, hardly drew a mention, couldn't find top gear on the deep sandy track.

We kept hoping though. You have to have hope. Harvey Wallbanger had taken the whole trip in his stride. The flight, the long hours traveling, the morning training, the walk to the racetrack, the 60,000 onlookers. He took it all in his stride Harvey, never left an oat, drank plenty of water, trained nicely. He is a nice easygoing character. He bit me three times since we have been here, but they were playful nips, just his way of telling me it's lunchtime.

Jack came in the paddock wearing silks of purple diamonds. Mom led the horse, it was like the old days back in Newmarket. Coming out of the first turn the horse in front of him got tightened up and his jockey pulled him back, Jack had to pull back too, but Harvey still took a bump, after that it rained sand the whole way, he turned into the straight nearly last, then found a bit when Jack asked him, he moved up to sixth, but that was as much as he could muster on that sandy track, it turned out that was the best that any of the five American raiders could muster that day.

I was disappointed for connections, but overall it has been great. The 3 a.m. wake ups have been wearying, and each day we were all more tired than the day before. The traffic is everywhere, making the constant taxi rides an ordeal. But South Korea won the Korea Cup. One for the locals, winning their own international invitational. That was a big step forward for Korean racing. After the race, back at the barn, the staff who had been helping us these past days seemed subdued. Ben asked them, weren't they pleased a local horse had won? They told him, but we have been with all of you, with your horses. We wanted you to do well.

The experience has been great. It was enjoyable, interesting, fun. The people were helpful and hospitable and warm. As for the food, well representatives of Keeneland and Korea Racing Authority were kind enough to take us out for dinner after the race. They knew where to eat and what to order. Apparently Korean barbecue is a big thing, but everywhere, even in the States, that had passed me by. It was really good. We had pork belly pieces cooked over a small charcoal pit right there on the table. We had side dishes with sesame leaf, garlic, chilies. We had a spicy soup, we had Kimchi…that's what that smell was! Cabbage soaked in chili–it was fine, the rest was excellent. For dessert I thought I'd eat some humble pie. I always seem to be eating that stuff lately. I'm surprised I'm not fatter, all the pie I eat.

The next day Harvey was flying home. I arranged for him to have more IV fluids before his flight, to ensure maximal hydration. Harry (Hyungmin Che) helped me; he was one of our interpreters for the week. We talked about football, the premier league in the UK, the Liverpool football team–his favorite. He knew more about it all than me. It turned out he was educated at an English boarding school in Switzerland. We talked about the States, that he hoped to come over for the Kentucky Derby next year. We friended on Facebook so I could show him around if he does. It turns out he spent four years attending college in Washington, D.C. It's been like that, the whole trip. Sometimes the further you travel, the closer you realize you are to home. John Lennon wrote a song about it all once.

It's been a whirlwind, well actually, a typhoon. For the really juicy stuff, I might have to attempt writing Ten Days in Seoul. Korea, I bow to you.

Patrick Gilligan is the author of Around Kentucky With the Bug! His next book, One Summer in Saratoga, is due for publication in the fall.