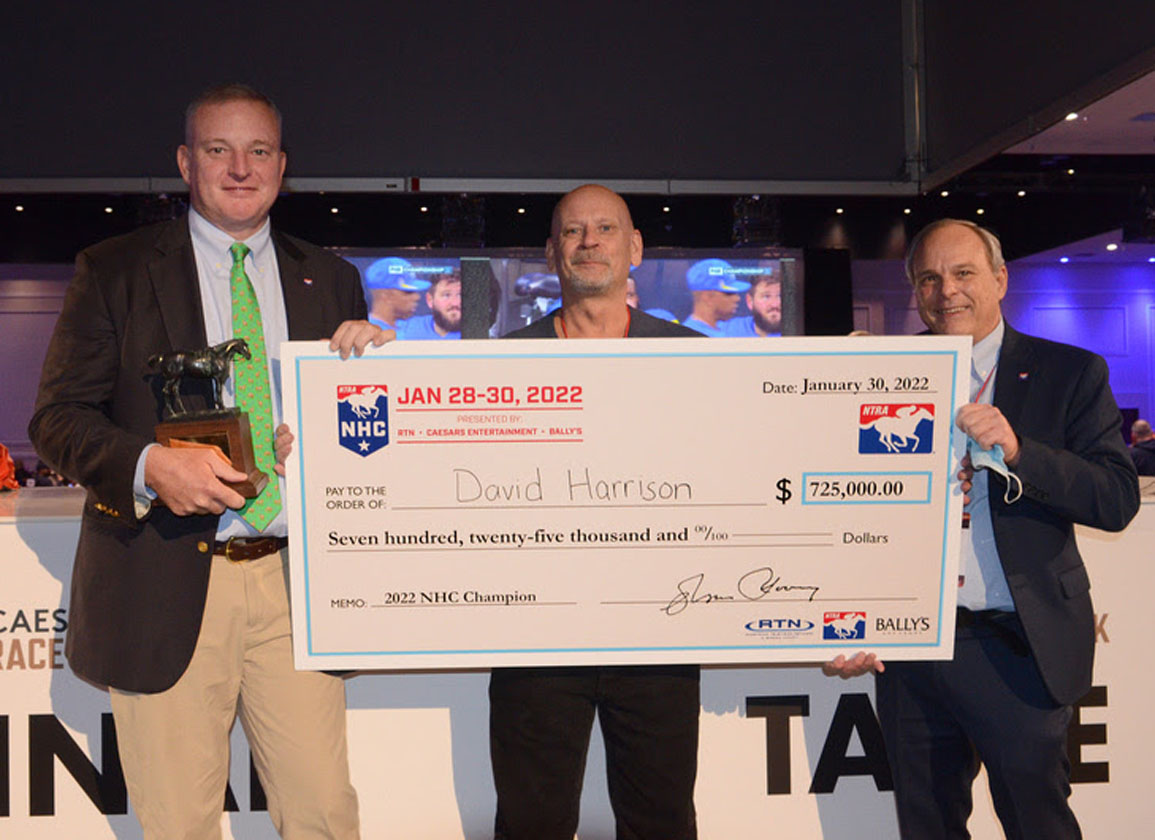 David Harrison, a real estate appraiser and collateral analyst from Webster, New York, northeast of Buffalo and near the southern shore of Lake Ontario, took home the $725,000 first prize and an Eclipse Award as Horseplayer of the Year ad the 23rd annual National Horseplayers' Championship at Bally's Las Vegas Jan. 30.

The 63-year-old amassed a total of $342 over the course of the three-day tournament from 53 mythical $2 win/place bets–18 each during the qualifying rounds Friday and Saturday, 10 in Sunday morning's semi-final round and seven at the Final Table, intended to mimic the final stages of high-stakes poker events. When all was said and done, Harrison had a margin of $17.20 on Ryan Patrick Scully of Montgomery, IL ($200,000), while A. J. Benton of Manchester, NH, finished third another $3.80 behind.

Harrison entered the final race of Sunday's event–the Baffle S. at Santa Anita–with a $16.60 lead over Benton and $17.20 over Scully. He landed on Don't Swear Dave, who ran home for second behind odds-on Maglev, allowing Harrison to stand up in the saddle, figuratively speaking, before the race had crossed the wire.

“The guys in second and third only had a few options,” Harrison said. “Don't Swear Dave went up to 4-1 and I thought, 'If I don't have that horse they could nip me. And my name's Dave! I can't let that horse beat me.'”

Harrison was in 14th position to begin the day, but advanced steadily through the semi-final round.

“My goal was to creep up and I hit my first couple of races,” he said. “Then the one that really got my confidence up was the horse at Laurel–Let Me Finish. Every time I get into a discussion with my wife she's always telling me that–let me finish. That was one of my hunch plays and that's probably the reason I won.

He added, “This is an absolute life-changing score,” Harrison said. “I'm a middle-class, middle-income, hard-working guy. This is going to help me hopefully retire a little bit earlier than I'd planned. I'm totally overwhelmed and don't even know what else to say.”

Harrison said he has been handicapping since the late 1970s, when he would frequent Belmont Park, and credits the late New York Racing Association broadcaster and handicapper Harvey Pack for teaching him how to handicap. After the trophy presentation, Harrison tossed his Daily Racing Form in the air in tribute to Pack, who died last July at the age of 94.

Dale Day, the track announcer at Remington Park, finished 10th, good for a $50,000 payday and the proverbial icing on the cake, after his beloved Cincinnati Bengals outlasted the Kansas City Chiefs to secure a spot in the Super Bowl.

Jonathon Kinchen, winner of the 2015 NHC and widely recognized from duties at NYRA and FOX television, was disqualified from the NHC Saturday after it was learned that he was not in Las Vegas in person for the competition, as required by rule. Ron Flatter, reporting for Horse Racing Nation, was first to break the news.

According to Flatter, Kinchen was present at Gulfstream Park Saturday for the Pegasus program and employed an intermediary to run his bets, strictly prohibited as laid out in the rules for the NHC which read, “All wagers must be placed personally, and in person, by the contest player. To avoid being disqualified, no person shall, directly or indirectly, act as an intermediary, transmitter or agent in placing wagers for the contest player, unless prior authorization is given by NHC officials.”

According to Flatter, one of Kinchen's two NHC entries was in contention for the semi-final round.

Kinchen tweeted several times from Las Vegas in the days leading up to the contest, including a photo of an older gentleman with the Twitter handle @MarvBetRunner. After the news broke of the disqualification, he tweeted a photo, drink in hand, from what appears to be an outdoor venue in his typically eclectic garb with verbiage that read: “It was worth it…Also, I'm done being nice…” At 2:11 Sunday afternoon, Kinchen tweeted, “Yes @ronflatter, I got a statement…”

Monday morning, the NTRA issued a statement of its own regarding the situation, while not mentioning Kinchen by name. That statement reads: “The NTRA disqualified a player from the 2022 NHC for violating the official rules. One of the violated rules states, “All wagers must be placed personally, and in-person, by the Contest Player.” The disqualified player was not present at Bally's during the NHC tournament and his contest wagers were being submitted on-site by an intermediary without authorization. No authorization was given to the player to leave Bally's or the State; he violated both. The rules of the NHC are clearly outlined and all participants are required to sign them prior to the tournament.”

NTRA President and CEO Tom Rooney said, “The rules are clear that participants must be onsite to participate in the NHC. The NHC is the world's most prestigious handicapping tournament. The integrity of the event is of paramount importance–not just to us but to the thousands of men and women who attempt to qualify and play each and every year. The NTRA will staunchly and steadfastly follow the rules and defend the integrity of this prestigious event and it's participants.”

Kinchen tweeted Sunday at 2:58 p.m. that “'I got a statement” too…'” and suggested that he would address the issue in an upcoming podcast with his “partner in crime” Peter Fornatale.

Through his Twitter feed Monday, Kinchen issued the following statement: “This weekend, while participating in the NHC, I traveled to Gulfstream Park to attend the Pegasus World Cup, planning to return to Las Vegas for the final day of the competition. I am a passionate racing fan first, and I was excited by the opportunity to see a heavyweight matchup in person. At the time, I did not believe that I was violating any tournament rules. I learned that I was incorrect and was subsequently disqualified from the competition. While my traveling to Florida certainly did not give me an unfair edge or advantage, the rules are clear and I accept the disqualification. I apologize to my fellow competitors for distracting any attention away from the event itself and offer my congratulations to David Harrison on his well-earned victory.”