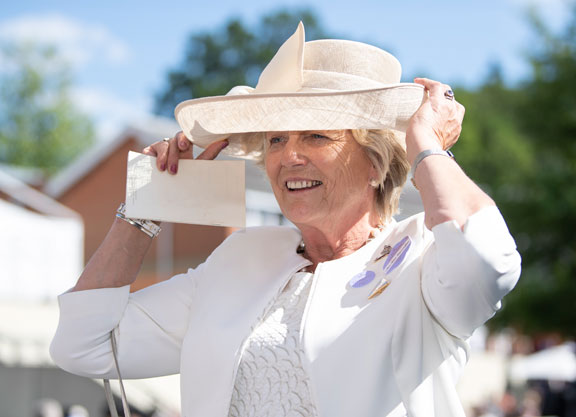 With the minor matter of preparing Europe’s best miler Alpha Centauri (Ire) (Mastercraftsman {Ire}) for potentially her fifth Group 1 win in succession this Saturday in the Coolmore Fastnet Rock Matron S., one would think that prospect would be monopolising the thoughts of her trainer Jessica Harrington. Far from it, as her multitasking abilities also include hatching and rolling out an exciting racing investment opportunity ahead of the yearling sales at Goffs and Tattersalls.

Harrington, in conjunction with her son-in-law Richie Galway, bloodstock agent Patrick Cooper and Elaine ‘Legs’ Lawlor are seeking investors to join them in acquiring a select team of yearlings to go to war with on the race course next year. The quartet, backed up by the trainer’s daughters Emma and Kate, rightly believe that the international re-sale market for horses that show a high level of form in Ireland is too strong and too lucrative to ignore.

“We plan to buy approximately six yearlings with the aim of reselling them either during their 2-year-old year or if not by the end of their 3-year-old season,” Harrington explained to the TDN at her kitchen table in Commonstown recently, in company with Galway, Cooper and Lawlor. “We feel we have the team, the infrastructure and the track record in place to make this an attractive investment opportunity. Essentially we have always been a trading yard and that will continue to be the case. People know that horses are for sale here and at the moment it appears the best opportunity to trade horses is off the track. If someone has a 2 or 3-year old that can win or be placed in an Irish maiden there is a global market for that horse straight away,” she said.

While Harrington as the designated trainer should fill would-be investors with confidence, having Patrick Cooper work closely with her in sourcing the yearlings should be no deterrent either. Cooper and his family have a long association with Harrington and her own family and while family associations are all well and good, agents must to be judged on the stock they have bought in the past and Cooper passes this test with honours. The BBA Ireland agent is certainly popular among the Irish wing of the ‘Its All About The Girls syndicate,’ set up by Legs Lawlor following the success of the syndicate of the same name in Australia, which Lawlor is also instrumental in running. Cooper purchased two yearling fillies for the Irish all-female syndicate last year, namely the Harrington-trained pair Chicas Amigas (Ire) (Dragon Pulse {Ire}) and Sparkle’n’joy (Ire) (Sepoy {Aus}) for a combined total of €65,000. The fillies have won three races between them and over €50,000 in prize-money this summer with Chicas Amigas recently sold to carry the silks of Qatar Racing for a multiple of her €25,000 purchase price. Meanwhile Sparkle’n’joy will line up in the opening listed race for fillies at Leopardstown on Saturday.

“Patrick has proven his ability to find and purchase high-class horses that weren’t overly expensive,” offers Richie Galway, back full-time now with the home team following a long stint as racing manager at Punchestown Racecourse. Galway has an active role in the day-to-day running of Commonstown Stables and is no stranger to buying and selling bloodstock internationally himself through his association with former school pals David Cox and Ben McElroy.

“It’s different, very different but I love it. I’m working for my mother-in-law, my sister-in-law and my wife, what could be better!” quipped Galway before adding; “Historically syndicates in Ireland tended to be about cheap horses owned by a large group of friends or colleagues to provide a fun day out. We’re certainly hopeful of maintaining the fun element in the new syndicate but also to bring a commercial aspect to it, something I think is definitely achievable with the plan we have in place and the people we have in place to implement it.”

Goffs director Legs Lawlor spends half the year in Australia where she is chief communicator to the syndicate members that race multiple Group 1 winner Global Glamour (Aus) (Star Witness {Aus}) and she is keen to expose owners in Europe to the level of communication that is considered the norm Down Under. “The information flow to the syndicate members is very important, the Australians do that so well and I plan to implement that same high level of communication with the members of the new syndicate.”

The spirit of ownership is also something Lawlor has noticed in everyday life in Australia where the syndicate model is so prevalent and successful. “For example I go into a butcher shop and I overhear people saying, ‘oh I’ve got a runner on Saturday,’ and they may only own 2% of the horse but as far as they are concerned they are an owner and it’s their horse,” she explained. “Australian trainers are so professional in their communication both with the media and their owners and that follows through then with syndicate managers. It makes everyone feel involved and that is the approach we intend to take with the new partnership.”

For the next month or so Cooper and Harrington will embrace the yearling sales with open minds over the type of yearlings they plan to buy for the syndicate. Both colts and fillies will be considered along with precocious and later-maturing types.

“Value is basically what we will be looking for and something that will ultimately have appeal to the international market. We think there will be gaps in the middle market this year that we can exploit to find some yearlings that Jessie and the team can add value to,” Cooper said.

Finding people with a spare €50,000 and then persuading them to part with that cash for a high-risk investment is no easy task, especially when there are plenty of other syndicate models out there, but such is the belief the team have in their combined abilities that they are the first investors committed to the venture.

“We’re looking at somewhere between 10 and 20 investors,” Galway explained. “We will also be putting up our own money; the BBA through Patrick, Jessie, Legs and [husband] Peter and myself. I think that is important and it shows we are committed to making this work. We’ve set the bar at €50,000 per investor, though that figure can then be diluted by each individual investor as they choose.”

Galway continued, “We do have clients who ask Jessie to buy them a yearling with a budget of say €50,000 and that’s great and sole ownership suits some people better, but for the same outlay this venture offers the same amount of fun, excitement and involvement with the risk diluted among a number of horses. We’d hope that if we can acquire up to six yearlings for an average of approximately €100,000 each the chance of finding a proper horse is significantly higher. This isn’t a new concept and there are other syndicates out there that are doing a great job but based on what I’ve seen the team do here I’d be confident that this one will be successful. With Patrick selecting, Jessie training and Legs communicating, I think the formula is there.”

A third of the juveniles Harrington has run so far this year have won and several are already accomplished stakes performers with others such as the G1 Moyglare Stud S. bound Trethias (GB) (Invincible Spirit {Ire}) promising to follow suit. Between the exploits of Alpha Centauri, the achievements of her flat string in general and the fact that she has also reached the pinnacle in the world of jump racing through G1 Cheltenham Gold Cup winner Sizing John (GB) (Midnight Legend {GB}), Harrington’s stock has never been higher. And with at least 120 horses in training at any one time she is enjoying being a trainer now more than ever.

“I don’t think we are doing anything much different,” she said. “Luckily this year we have some very good horses and that is how it has developed. Training has its ups and downs but we are enjoying a great period at the moment and long may it continue. While things are going well we have no intention of resting on our laurels at all. We want to continue to try and get better horses into the yard. We are an ambitious team and there is still a lot we want to achieve. For this new syndicate I want to foster a real sense of ownership, that each horse is theirs. We would love to attract some people who are new to racing or who have been involved in the past but for whatever reason have been out of the game for a while,” Harrington said.

It is the rise and rise of the Jessica Harrington brand that Legs Lawlor feels will be the easiest sell when pitching for investors.

“Jessie’s success has really captured the imagination across the world and to me she will be the unique selling point. She has become a global name in racing and I think people will want to become part of that success,” she said.

Galway is in a unique position to chart the relentless rise in the stable’s powers and contributes a lot of the growth to overseas owners and breeders. “The growth I have seen in this place in the last five years is huge. We have a lot of international owners, people like the Niarchos family, Jon Kelly, Bob Edwards of e5 Racing, Ms Patino, Nick Brady, etc., and I would hope that we can attract more overseas people into the syndicate.”

However it is Patrick Cooper who sums up the new venture the most simplistically as he said, “We need to get better horses, I mean they aren’t getting any slower down in Ballydoyle are they, so if we want to continue to compete with the best we have to improve the standard of horse here.”